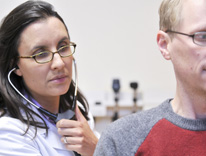 AURORA, Colo. - Twice as many people insured by Medicaid as by private insurance report barriers to primary care and Medicaid patients are twice as likely to visit the emergency department as their privately insured counterparts, according to a study published online in Annals of Emergency Medicine.

"Even those Medicaid patients who have primary care physicians – and that is less likely than for people with private insurance – report significant barriers to seeing their doctor," said senior author Adit Ginde, M.D., MPH, FACEP, assistant professor of emergency medicine at University of Colorado School of Medicine. "Medicaid patients tend to visit the ER more, partly because they tend to be in poorer health overall. But they also visit the ER more because they can't see their primary care provider in a timely fashion or at all."

The study authors analyzed 230,238 adult responses to the 1999-2009 National Health Interview Survey for an association between barriers to primary care and use of the emergency department. Overall, 16.3 percent of Medicaid beneficiaries had one or more barriers to primary care, compared to 8.9 percent of people with private insurance. More than one-third (39.6 percent) of Medicaid patients visited the ER within the last year versus 17.7 percent of privately insured patients.

"Our findings are particularly worrisome in light of the additional 16 million people who will be added to the Medicaid rolls over the next decade," said Ginde. "The shortage of primary care providers in the U.S. seems to affect Medicaid patients disproportionately and more harshly."

Even comparing patients with barriers to primary care side by side, Medicaid beneficiaries were still more likely to visit the emergency department than those with private insurance (61.2 percent v. 28.9 percent for patients with two or more barriers to primary care). Barriers included not being able to reach a doctor by phone, not being able to get a timely appointment and lack of transportation to the doctor's office.

"The efforts by some states to keep Medicaid patients out of the ER do not take this lack of access to primary care into account," said David Seaberg, M.D., FACEP, president of the American College of Emergency Physicians. "It puts both patients and providers into an impossible position that will only get worse as more people enroll in Medicaid."

Annals of Emergency Medicine is the peer-reviewed scientific journal for the American College of Emergency Physicians, the national medical society representing emergency medicine. ACEP is committed to advancing emergency care through continuing education, research, and public education. Headquartered in Dallas, ACEP has 53 chapters representing each state, as well as Puerto Rico and the District of Columbia. A Government Services Chapter represents emergency physicians employed by military branches and other government agencies. For more information visit www.acep.org.