As he looks back on this year’s activities at the Rocky Mountain Alzheimer’s Disease Center, Huntington Potter, PhD, points to one event that was especially meaningful – receiving the center’s first brain donation for research from a person with Down syndrome who died with late-stage Alzheimer’s disease.

It’s a contribution neuroscience researchers hope will help further unravel the mystery of why some people develop Alzheimer’s disease symptoms while others do not.

Potter, whose groundbreaking research expanded knowledge of the genetic and molecular relationships between Alzheimer’s disease and Down syndrome, said the donation was made by a Denver-based family who felt that their sister would have been thrilled to know that she was making a significant contribution to science.

“It’s a great contribution to humanity,” he added.

The brain came from a 63-year-old woman named Gretchen Josephson, whose family has a long lineage in medicine and a connection to the CU School of Medicine. (See sidebar below). 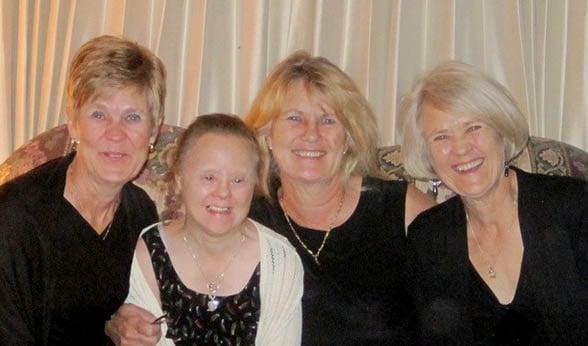 The brain donation came from Gretchen Josephson, second from left, a woman with Down syndrome. Josephson's family has a long lineage in medicine. Here, she is pictured with her three sisters.

According to Potter, the mystery is that despite all people with Down syndrome having this predisposition to Alzheimer’s disease brain pathology, around 20 percent will not develop dementia symptoms.

“We’d like to study them to better understand how Alzheimer’s disease brain pathology and dementia develop,” he said. “That way, we could learn who is most likely to develop dementia and who isn’t. And we’d like to be able to initiate treatment for people who don’t have Down syndrome but who might be at risk, say, in their 40s or 50s, and prevent the cell death and the problems that accompany Alzheimer’s disease.”

The vast majority of people who are diagnosed with typical age-related Alzheimer’s disease, over 95 percent, do not have Down syndrome. However, Potter’s earlier research showed that they have Down syndrome-like cells with three copies of Chromosome 21 throughout their bodies, including in neurons in their brains.

Insights into the pathology

“What are the earliest signals in people with Down syndrome that they’re going to develop Alzheimer’s disease within five or 10 years? Can we use those same signals, whether it be a blood protein or a neuropsychological test, to help figure out when and whether the rest of us are at risk for Alzheimer’s disease?”

In recent years, Alzheimer’s disease research centers around the world have received many brain donations from typical people with Alzheimer’s disease, but not from people with Down syndrome. These donations are very rare, and “are very valuable,” said Potter, “because if we can understand more about the pathology that develops in people with Down syndrome, we will be better able to understand the pathology that happens in typical people. And that’s going to give us a hint of what’s going wrong, and of how we might be able to compare the brains and come up with an idea for fixing them.”

Potter also notes that receiving a brain for research from a person with Down syndrome who did not have dementia at death would be especially rare and would be extremely valuable for research.

Potter encourages adults with Down syndrome to be assessed by the neurology team in the Memory Disorders Clinic, part of the Neurology clinic in the Anschutz Outpatient Pavilion and the clinical arm of the Rocky Mountain Alzheimer’s Disease Center. “We recommend this regardless of whether they have memory problems, so that they can take full advantage of the consultation opportunities,” he said.

More information about the center is at www.medschool.ucdenver.edu/alzheimers.

Guest Contributor: Both of these stories were written by Helen Gray, MBA, Communications and Community Outreach Coordinator of the Rocky Mountain Alzheimer's Disease Center.

GRETCHEN JOSEPHSON MADE A 'LAST GREAT GIFT TO ALL OF US'

The Denver woman with Down syndrome whose brain is the first donated for Alzheimer’s disease and Down syndrome research had a reputation for making her own way in the world and for making friends wherever she went.

Gretchen Josephson, who was 63 when she died, was the daughter of two physicians, the fourth of four girls. Her mother, Lula Lubchenco Josephson, MD, was a professor in the Department of Pediatrics in the CU School of Medicine. Her father, Carl Josephson, MD, was a cardiologist in private practice.

Gretchen graduated from South High in Denver Public Schools and studied food service at the Emily Griffith Opportunity School. The training helped her land a job as a bus girl at the Tea Room at the old downtown Denver Dry Goods store before it closed. Gretchen was retrained to work with inventory on the retail side of Foley’s, and then Macy’s at the Cherry Creek Mall. By the time she retired, Gretchen had worked continuously for 37 years.

And customers remembered Gretchen. Her eldest sister, Patty McFeeley, MD, said “you couldn’t walk with her through the Cherry Creek Mall without someone stopping her and saying, ‘Hi Gretchen.’”

Wrote a book of poetry

Gretchen wrote poetry. In 1997, with her mother’s encouragement, she published a book of poems called “Bus Girl,” and read and signed copies for a packed house at the Tattered Cover bookstore. 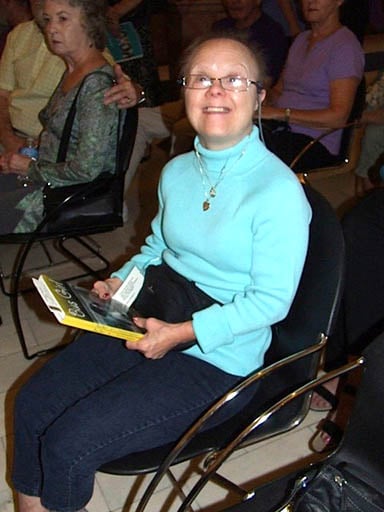 One of Gretchen’s passions was country music. She frequently traveled to Nashville and figured out how to go backstage at concerts. The walls of Gretchen’s apartment were covered with photos of her and the stars she adored so much.

Another passion was sports. In addition to skiing, Gretchen swam and competed in Special Olympics. Her family took her on scuba trips, and her sister said she especially loved the shipwreck dives.

Self-advocate for Down syndrome

Gretchen was a self-advocate for Down syndrome, and she spoke at numerous national and international conferences, telling large audiences about her personal experiences with independent living.

McFeeley, a pathologist, said it was natural for Gretchen’s sisters to consider making the brain donation for scientific research. She occasionally took Gretchen along when she performed post-mortem examinations on cadavers, and Gretchen was, according to McFeeley, “fascinated” with the procedure.

Although Gretchen’s Alzheimer’s disease had advanced so much that she wasn’t able to discuss her own brain donation before she died, her sisters firmly believe that would have been what Gretchen wanted. “It was her last great gift to all of us,” said McFeeley.