Tamara Terzian, PhD, a dermatology professor and researcher in the University of Colorado Cancer Center, focuses much of her research on genetic pathways that underlie diseases of the skin, such as pigmentary disorders and melanoma. Of particular interest in these diseases is the role of the tumor-suppressor molecule p53.

So how was it that Terzian’s research team made a breakthrough discovery in the complex world of lymphatic disease? It turns out the team took a circuitous journey, rather similar to how lymph, a fluid containing white blood cells, travels through the body. 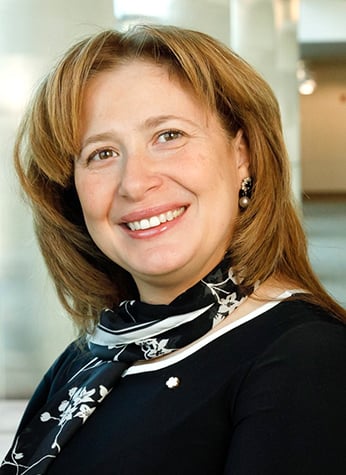 Lymphatic diseases affect the body’s lymph-transporting system, with the most common being lymphedema, which results in a buildup of fluids in the body, such as the arms or legs. It is a chronic, often disfiguring and painful, condition suffered by up to 300 million people worldwide, including 10 million Americans. The condition is common after cancer surgery, in areas where lymph nodes are removed.

‘There is no cure’

“Lymphatic diseases are routinely undiagnosed, and there is no cure,” said Terzian, an assistant professor of dermatology in the CU School of Medicine. “Research is under-funded, so it’s a huge problem to overcome.”

She admits that her research team “stumbled into the lymphatic world” while researching p53’s role in cancer. Using mouse models, the team discovered that p53 plays a key role in the development of the lymphatic network. Specifically, Terzian said, “we reported for the first time a critical role of p53 overexpression in defects of lymphatic development.”

Terzian’s team tried to see whether targeting p53 to reduce its levels in two animal models would reverse the lymphatic disease present in the mice. The targeting worked, leading to reduced swelling. “We were fascinated because, as we discovered, this reversal was hard to do in other researchers’ lymphedema models,” she said.

The team then checked human tissues. The question was whether they could connect a p53 overexpression to lymphatic anomalies in humans. Preliminary data has been encouraging: Out of eight cases of lymphatic anomalies screened, six showed p53 upregulation. Terzian said this is a case of a molecular stimulus triggering an increased cellular response.

“It is quite astonishing,” Terzian said. “We had the eureka moment, and there it is: p53 plays a central role in some lymphatic disease.”

The findings indicate that targeting the p53 pathway, an unrecognized mechanism thus far in the development of lymphatic deficiencies, may offer therapeutic options for incurable lymphatic maladies. And it could mean that potential therapies extend beyond relief for lymphedema, as lymphatic disease is involved in so many other illnesses – including diabetes, obesity, rheumatoid arthritis and cancer.

plays a central role in some lymphatic disease.’

“Every day we are finding out more and more about how lymphatic diseases are intertwined with other types of diseases,” Terzian said.

It all began with a curiosity about the molecular mechanisms of lymphatic anomalies in mice. “That’s how the journey started,” she said. “Revealing this new and central role of p53 in lymphedema is just amazing.”

Read a preprint article about the study here.