In an article he wrote after a second bout with a rare form of cancer, Denver City Councilman Albus Brooks observed, “The great paradox of my experience with cancer is that it gave me temporary weakness and permanent strength.”

In those moments of weakness — the first arriving in 2016 and the second in 2018 — Brooks took comfort in the “still hands and clear minds” of his medical team, which is based at the University of Colorado Anschutz Medical Campus and is, in Brooks’ words, “the best in the world.”

Just as in summer 2016, when an international cast of physicians helped him beat a 15-pound sarcoma, Brooks this spring was cared for by the same group of doctors: There was Victor Villalobos, MD, PhD, an oncologist specializing in sarcomas (Mexican-American); Evalina Burger, MD, a specialist in orthopedic surgery (native of South Africa); and Ana Gleisner, MD, PhD, who performs surgeries on many cancers, including sarcomas (hailing from Brazil). C.J. Kleck, MD, an orthopedic spine specialist, assisted on the May 1 surgery at the University of Colorado Hospital to remove the growth. 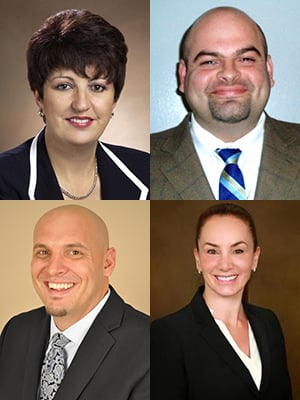 This time the tumor was the size of a grape, not a cantaloupe. Brooks’ first tumor sat on his pelvis, lodged between vertebrae in his lower back. The latest mass, a small chondrosarcoma, grew very slowly in the psoas muscle — part of the hip flexor — and was closely monitored by Villalobos during regular checkups.

Villalobos said the tumor appeared to be a residual disease. “I’m happy with how Albus is doing,” he said. “We’re getting more treatments developed for sarcomas.”

Like many other cancer treatments, immunotherapies are a growing focus in chondrosarcoma care. For a subset of chondrosarcomas, Villalobos said, a drug has been developed that targets a genetic mutation in the mass and essentially turns the tumor off. Some patients’ previously fast-growing tumors have responded to the pill, showing no growth for a few years.

Sarcoma Medical Oncology in the CU Cancer Center is the largest sarcoma center in the region (next-closest is in St. Louis). The center operates in a one-stop-shop, multidisciplinary fashion for patients: they see specialists in oncology, radiology, pathology, general surgery, orthopedic surgery and other disciplines all at once, rather than having multiple appointments.

Patient visits continue to climb, with close to 400 new patient visits in the past year. “It’s been growing by leaps and bounds,” Villalobos said. 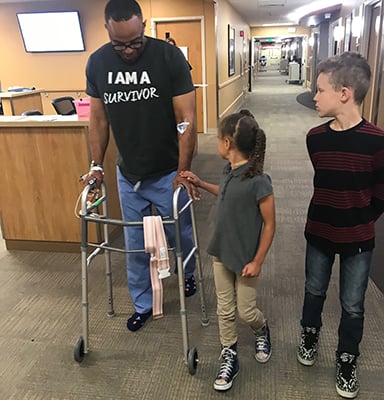 After his May 1 surgery, Denver Councilman Albus Brooks walks with two of his children — Kaya and Makai — at University of Colorado Hospital.

Burger, an orthopedic surgeon who has twice operated on Brooks, said the weekly sarcoma multidisciplinary meetings help create life-changing outcomes. “We try to get the best decision as a group for each patient. It’s really magical because of the collaboration and exchange of knowledge,” she said. “It’s a meeting of the minds, and it’s the best way to address problems.”

She noted that the international mix of physicians isn’t happenstance. It’s part and parcel of how the CU Anschutz Medical Campus delivers world-class clinical care. “Diversity is one of the strengths of this university and this School of Medicine,” Burger said. “In every department, there are people from all over the world. They bring different experiences and different approaches to problems.”

Health problems are already the furthest thing from Brooks’ mind. The former linebacker and safety for the CU Buffaloes said he’s feeling back to full strength and is even thinking about competing in a triathlon.

As for his care team at CU Anschutz, “They’re incredible. I talked about it in my Medium article. They prove it time and time again, especially with sarcoma,” Brooks said. “Drs. Villalobos, Gleisner and Burger are the best in the world — they’re internationally renowned.”

In the online essay, Brooks mentioned a complication after the May surgery. With the surgery requiring a 10-inch incision in his abdomen, he ended up developing an ileus, which is essentially a lack of movement in the intestines. It can occur as a side effect after a particularly invasive surgery. The condition was treated with a tube inserted through his nose for about 50 hours, removing bile from his system.

During that time, Brooks reflected on life. Among his observations: “Don’t run from your weakness, for that is where you will find your greatest strength.”

That’s one of the many things Brooks’ physicians love about him — the way he turns a negative into a positive. He continues to make quarterly visits to CU Anschutz for checkups.

Burger said Brooks is “truly unselfish and a great family man.” The Councilman, who serves a downtown district, has a wife and three children — Makai, Kenya and Kaya. “He has a passion for life, and I think people like that will make a success of anything you put in front of them.”

Since his first bout with sarcoma, Albus Brooks has been a regular participant at Denver’s annual Race to Cure Sarcoma 5K Run/Walk. This year’s event takes place Sept. 15 at Cherry Creek High School. Brooks served as run/walk chairman for the 2016 debut event, which raised $40,400 for the University of Colorado Foundation.