Home News State of the Campus: ‘Unmatched trajectory’ back to News

With a nod to the visionaries who came before him, those who dreamed of what the former Fitzsimons Army medical site could become, University of Colorado Anschutz Chancellor Don Elliman said in his State of the Campus address that the campus is on a grand journey, one closer to its beginning than its end.

In an address that honored the past, noted recent accomplishments and mostly invoked the future — “imagine” was a central theme — the chancellor asked the full auditorium to pause, take stock and do a bit of daydreaming.And the key is imagination.

“The task now is to imagine the course for the next 20 years,” he said. About 250 faculty, staff and students listened to Elliman’s address Tuesday in the Hensel Phelps West Auditorium. 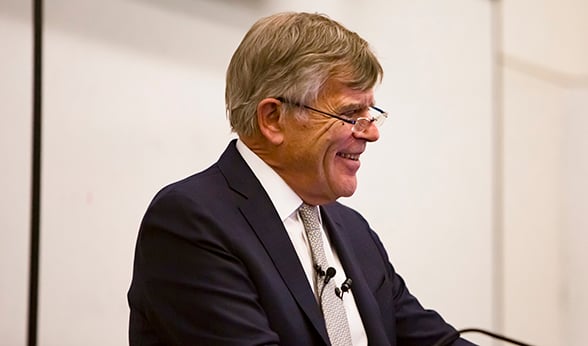 Chancellor Elliman said in his address: "The task now is to imagine the course for the next 20 years."

Through data, visual graphics and a description of our mission, the chancellor explained the qualities that distinguish the CU Anschutz Medical Campus from other academic medical centers, most notably in how the campus has become a major health care destination as well as an economic engine for Colorado and the entire Rocky Mountain region.

He said the campus’s trifold mission remains steadfast: “To provide the finest medical care in the world, to push the science behind that care to new horizons, to train those who will deliver that care in the future.”

The keys to reaching these goals, he said, are to work even harder at attracting and retaining the best talent and to continue driving innovation. 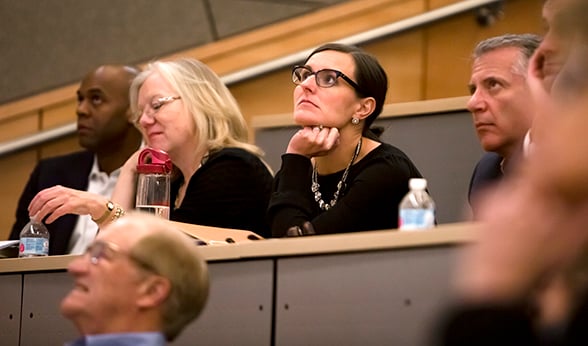 Audience members listen attentively to the State of the Campus address in Hensel Phelps West Auditorium.

Elliman said the campus’s greatest strength is intellectual entrepreneurship; our nimbleness, dedication and innovation has pushed the institution to world-class status. He cited rising figures in various performance areas over the past five years:

“Taken all together the picture is a trajectory that is probably unmatched by any other academic medical campus in North America,” he said. “As I said, it’s only the beginning.”

He outlined a number of the priorities for the future:

Elliman said CU Anschutz greatly benefits from having highly ranked pediatric and adult hospitals right on campus — an asset that needs to be leveraged. After listing the many accolades received by both University of Colorado Hospital and Children’s Hospital Colorado, the chancellor said, “There is no magic here. The story is people. Recruiting and retaining the best of the best is the game we are in, and our success will define our future.” 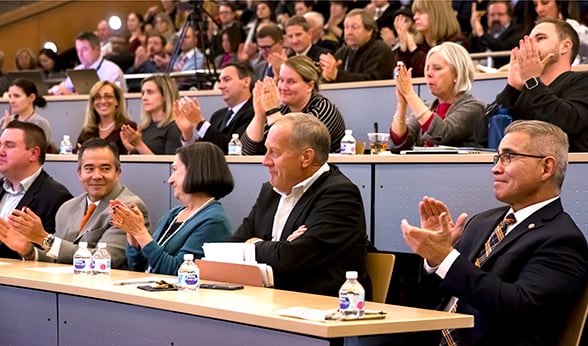 The audience gives Ted Harms, executive director of The Anschutz Foundation, a round of applause after Chancellor Elliman recognizes the foundation's recent $120 million gift to the CU Anschutz Medical Campus.

He noted that the talent-recruitment effort received two major boosts this year: The $47 million in program support from UCHealth to the Cancer Center with Rich Schulick, MD, as its new director, matched by a similar investment from the School of Medicine; and The Anschutz Foundation gift.

The latter was a $120 million gift, the largest in campus history and in cash terms the largest in the history of all of CU; 60 percent of the gift will go to talent recruitment. The audience gave Ted Harms, executive director of the foundation, strong applause.

CU Anschutz’s research enterprise, one that is redefining the future of health care, sets the campus apart from our regional health care competitors, Elliman said. Congress is poised to increase National Institutes of Health (NIH) funding by about $2 billion next year — the NIH supplies about 42 percent of our total research funding — and the campus continues to diversify its research portfolio from other sources.

‘The story is people. Recruiting and retaining the best of the best is the game we are in, and our success will define our future.’

A focal point is the Colorado Center for Personalized Medicine, which is gaining major traction in integrating bio specimens with data from electronic health records and other sources to power bioinformatics for research and precisely tailored treatment.

With the arrival of CU Innovations in 2015, “we’ve totally re-engineered the innovation development process, created real clinical validation programs with both UCHealth and Colorado Children’s Hospital, and built new corporate partnerships with the likes of Eli Lilly and GSK, and others,” he said. “Over 200 companies visited us in the last year alone, and what we’ve built has become a true national model. And it’s just beginning.”

Internal invention disclosures have increased over the past three years, from 70 per year to more than 200 annually.

The National Mental Health Innovation Center continues to employ new ideas and methods, including virtual reality, to break barriers in mental health care. The center complements the expanded work of the Helen and Arthur E. Depression Center; the Marcus Institute for Brain Health; and the Steven A. Cohen Military Family Clinic.

While progress has been made on campus in support of mental wellness, more than doubling our investment in student services, the support of all campus constituencies — students, faculty and staff — needs to be increased. Elliman noted these efforts will be boosted by The Anschutz Foundation gift. 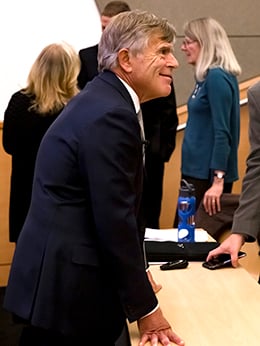 Chancellor Elliman visits with attendees before his State of the Campus address.

The chancellor reported steps have been taken to establish a communications and marketing team that is focused on elevating the CU Anschutz profile regionally and nationwide. The team will oversee the rollout of our brand identity, a newly redesigned CU Anschutz website, and more robust content sharing across campus platforms and channels.

Further boosting the branding and identity of CU Anschutz will be the long-awaited shift to a domain name of “cuanschutz.edu” early next year. “It’s time — past time — we start telling the world about the specialists of this institution,” he said.

The year ahead teems with possibilities and breakthroughs, Elliman said, highlighted by our research enterprise further gaining momentum via:

He highlighted accomplishments and innovations occurring within each of our schools and colleges; said a world-class-asset is in the makings with the continued expansion of our bioengineering program; underscored the record-breaking work of the Advancement team, including its role in supporting the much-needed Anschutz Health Sciences building (groundbreaking in January); and said two new commercialization reserves will be coming out of CU Innovations — one supporting early stage, proof-of-concept development and the other investing in commercial IP.

Challenges on the horizon

Bumpy roads ahead in the health care marketplace are presaged by a triumvirate of “possibles”:

“Any of these changes would have huge impacts on us and our affiliates,” Elliman said. “The one thing we do know is that the cost of health care cannot continue to rise; it’s not fiscally sustainable. We have to be partners in finding ways to reduce the cost of care. We ignore that at our peril.” 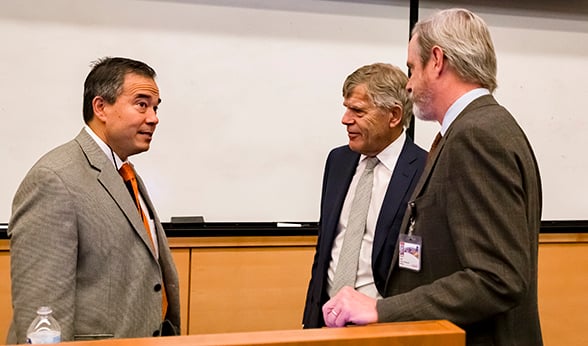 On the flip side, he said, while our counterparts are dealing with stagnation, CU Anschutz faces enviable problems from growth, especially in terms of parking and infrastructure.

Other key challenges include retaining top talent and maintaining support levels required to fuel innovation. In all of these areas, The Anschutz Foundation gift will be a major asset.

“In short, we have built huge momentum, and we have many unique strengths,” Elliman said. “The most important of these is the fact that we have, on one unified campus, six wonderful schools and colleges and two highly ranked hospitals.”

How to best leverage all of these assets brought the chancellor back to the start of his address — imagination, and the fact that all the work done at CU Anschutz comes down to people.

It is people, he said, who will scan the horizon for fresh ways to imagine the future, even if it is something currently beyond the confines of our current imagination.

He closed the address by showing a stirring video that tells the story of the exemplary care provided to a cancer patient — essentially why we do what we do. “These are the stories we’re going to be sharing to promote the great work of the people in this room and on this campus,” Elliman said. “Your stories. And we can’t wait to tell them.”