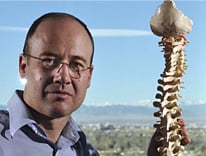 Stephen Davies’ research into repairing spinal cord injuries comes too late for Christopher Reeve, the actor who played Superman and who died in 2004 after being paralyzed in a horseback riding accident. But the answer to Reeve’s prayers may come soon.

Davies, a School of Medicine researcher, has found a way to restore near-normal mobility to rats with severe spinal cord injuries. He does it by injecting their injured spines with precisely cured stem cells and a human molecule that can prevent scarring.

Working off two massive computer screens, Davies calls up images showing nerve axons growing across the sites of spinal cord injuries in rats. The axons progress along the animal spines and connect with undamaged nerve circuits.

On a test course to measure mobility in spine-injured rats, the animals "were walking almost normally after a month," Davies says.

The Scottish-born, British-raised scientist came to the Anschutz Medical Campus in Aurora from the Baylor University School of Medicine. He wanted to take advantage of some of the finest research facilities in the country and the campus’ reputation for collegiality among top-flight researchers.