At the recent Talent and Attire Show hosted by the Association of International Researchers (AIR), these were only a few of the responses to Ranjitha Dhanasekaran, PhD, president of AIR, who opened the show by directing the audience: “Say hello in your native tongue.”

The show in the Krugman Conference Hall, complete with international banquet catered by local restaurants, was the culmination of the nationwide International Education Week (IEW). “IEW is hosted by the State Department of the United States to recognize the importance of international education and cultural exchange,” said Michelle Larson-Krieg, JD, director of the International Student and Scholar Services (ISSS) with the Office of International Affairs at the CU Anschutz and CU Denver campuses.

One of the many volunteers who made the event possible, Daniela Santos, MD, said the annual event fosters both a sense of belonging and acceptance among international researchers on campus as well as an avenue to show pride in their heritage. “It’s a two-way exchange of ideas,” she said. For example, Santos elaborated, it changed her perspective seeing a Nigerian lab mate, who typically wears U.S. street clothes, donning traditional Nigerian apparel for the attire show. “It’s a way to learn about who he is and where he came from.”

Humor a theme of the night 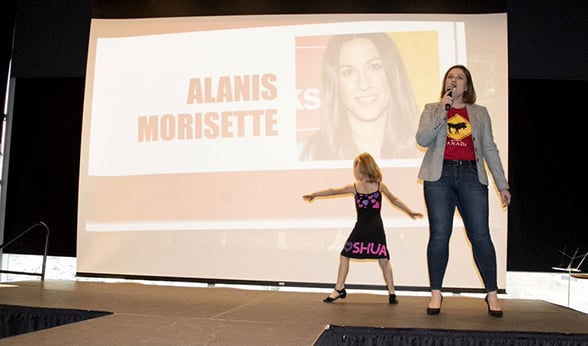 Canada-born Jennifer Major, PhD, and Scotland-born John Peacock, PhD, postdoctoral fellows at the CU Anschutz Medical Campus, served as hosts and comedic relief for the event. “What’s the difference between the United States and Canada?” Peacock quipped to the audience. “The U.S. has a nice neighbor.” Off-stage, a more serious Peacock explained that as a scientist, it’s important to have interests other than science, and the event brings much-needed art and culture to the medical campus, which he feels can be a bit sterile at times. “There are many diversely talented people working here, and unless they have such a platform to show off these talents, few people will know this.”

In contrast to Peacock’s droll humor, Major, AIR’s vice president of communications, performed a Canadian music tribute while her 6-year-old daughter Roxy danced in accompaniment. While not intended as a comedy routine, Major’s rendition of Alanis Morissette’s “Ironic” was affected by a few sound glitches, causing her to improvise with an a cappella performance and lending some levity amidst the technical problems.

Global talent on a local stage 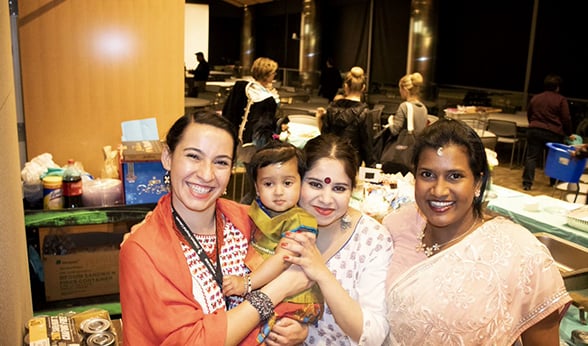 The two-part talent show took a break for dinner, followed by the attire show. Over 100 international and domestic faculty, staff and students were in attendance, many with their children. Talents on display included singing, dancing, folklore and short comedy readings. “People embrace the opportunity to share their background, culture and talents,” said Larson-Krieg. “You can see the enthusiasm for the event in the volunteers, the people who participate, and the performers.”

Marveling at the diversity of the campus international community, director of the Postdoctoral Office and Career Development Office Bruce Mandt, PhD, joked, “Who knew there was so much talent hiding behind lab coats?” Mandt said events such as the talent show are important career-development opportunities. “Science is global,” Mandt insisted. “Our trainees need opportunities to understand that science transcends borders and at some point, regardless of whether they remain in academia or move into other industries, they will work with people from all over the world.”

Nabanita Mukherjee, PhD, wearing traditional ceremonial attire including a reed crown, performed Odissi, one of the oldest surviving Indian classical dance forms. Mukherjee explained that her performance began with a tribute to Mother Earth, then to the Almighty, to the Teacher/Guru and finally to the audience. In the past, Mukherjee frequently performed public dance routines; however, she took a break from dancing following the birth of her child. “It felt great to me personally to realize I can continue dancing,” she said.

One of the most striking performances of the night came when the song “The End of the World,” most notably performed by Skeeter Davis and featured in movies such as “Girl, Interrupted” and TV shows including “Mad Men” and “Lost,” was performed at the event by Yao Ke, PhD, who alternated singing in English and Mandarin Chinese. Given the familiarity of the tune, many in the audience sang in their native language, serving as a reminder that though songs may be translated into other languages, the melody remains the same. Likewise, at CU Anschutz, a community of researchers from diverse cultures and backgrounds are united by their passion for science.

Dhanasekaran added, “The Association for International Researchers is here to promote inclusivity and diversity.” Further elaborating, she quoted thought leader Verna Myers: “Diversity is being invited to the party. Inclusion is being asked to dance.”