CU Anschutz Chancellor Don Elliman welcomed the news that our University Police Department has been awarded a prestigious accreditation from an international law enforcement organization.

“It is with great pride that I share the news of this high honor, the c­ulmination of a lengthy effort by our outstanding police department to meet international best-practice standards and thereby further raise the exemplary service and stature of our campus public safety officials,” Elliman said.

The International Association of Campus Law Enforcement Administrations (IACLEA) has 1,033 institutional and more than 4,000 individual members worldwide, mostly in the United States and Canada, and only 69 have achieved this high honor of accreditation. The department went through an extensive on-site assessment last fall and subsequent commission review.

“It’s very relevant to what we do in a university setting,” said CU Anschutz Police Chief Randy Repola. “Also, it’s a statement to the community about our accountability.” 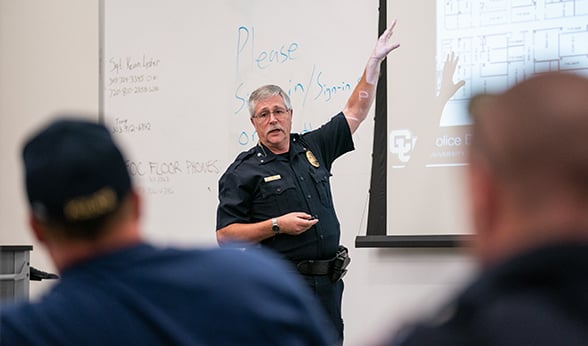 Smidt, Hayes and Grover played key roles in moving the four-plus-year process forward – momentum that was well under way when Repola became chief in April 2017. “Chief (Doug) Abraham had the wisdom and vision to start this process,” Repola said. “I inherited it halfway through and decided to finish it.”

“Working with this police department is very rewarding, and we appreciate what they do every day on our behalf,” EVC Carrothers said. “Being able to share in this event with Chief Repola and the team in Vancouver was  incredible. This IACLEA accreditation was hard work, and it further validates their sincere dedication and professionalism. Well done former Chief Abraham, Chief Repola, and your amazing team. You all knocked this one out of the park!”

The IACLEA Accreditation Standards manual is made up of 215 standards in which police departments, in order to become accredited, must prove compliance. “So, there’s a lot of updating of your policy manual,” Repola said. “There were days we sat in the conference room for many hours rewriting policies.”

Besides requiring documented proof of compliance with the standards, IACLEA requires regular training to occur in key aspects of law enforcement. “Probably 90 percent (of the requirements) are things the community doesn’t see because our supervisors are doing what they’re supposed to do, so it doesn’t become an issue in the community,” the chief said.

IACLEA’s reaccreditation evaluations occur every four years. Repola said the process will likely be easier next time around, as the standards and best practices will have been in place with a consistent culture of compliance.

The cooperation and buy-in of everyone in University Police, including during a mock-assessment exercise the department put itself through before the assessors’ on-site visit, was essential to the successful bid for accreditation, Repola said.

“It’s fine to have policies in place, but if we didn’t have the buy-in from middle managers and the rest of the team, this would not have been possible,” he said.