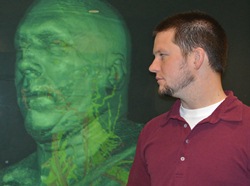 As long ago as 350 B.C., Greek physicians were learning about human anatomy by dissecting the bodies of condemned criminals.

So, perhaps it’s appropriate that Texan Joseph Paul Jernigan, a convicted murderer who donated his body to science, would produce the ultimate definition of the adult male body, in three dimensions and at high resolution: the Visible Human.

Today, nearly 20 years after Jernigan’s death by lethal injection, his body has taught countless students around the world about anatomy, thanks to the Center for Human Simulation at the University of Colorado Denver | Anschutz Medical Campus. 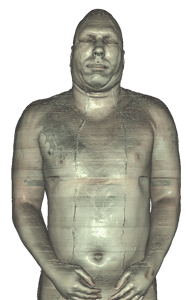 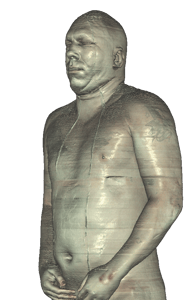 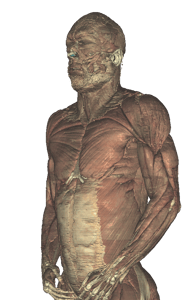 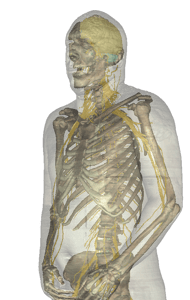 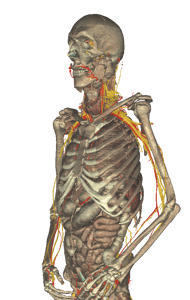 Adam Lawson, B.A., M.S., a professional research assistant in the Center, recounts the process whereby Jernigan’s body has become a virtual body. “When the body arrived, it was flash-frozen in a block of ice and then the ice was cut into four pieces,” said Lawson. The next steps were meticulous and time-consuming:

“We went through every photo and said ‘This is part of the lung, this is a nerve, this is the artery,” said Lawson. It took seven years to complete the process; when they were finished, researchers had taken 1,876 photographs and identified more than 2,000 structures in the body.

In the next step, Lawson’s colleagues recreated the body using the photos. “We virtually stacked the images, like Legos,” said Lawson.

In the final step, the images were rendered to create software which now showed the virtual body in 3-D.

Learning from the Visible Human: “We want to push the edge.”

Today, the primary goal of the Visible Human is to educate everyone from 6th-graders taking a tour of the Center to health care professionals in all disciplines.

When students at the University of Colorado School of Medicine who are studying anatomy stand next to a cadaver, they have a computer showing the Visible Human at their side. They can look at a cadaver rib and then turn to the Visible Human rib and dissect the area around it virtually. Then, they can turn back to the cadaver and practice what the Visible Human has shown them.

“When you dissect a real structure, you can’t bring it back,” said Lawson. “But when you dissect virtually, you can change your mind and reverse course. You can experiment more, and that means you can learn more.”

The Visible Human can also be used to practice complex clinical procedures. Students who want to practice diagnostic knee surgery can use a probe and a scope to actually explore the knee in a simulated surgery, using a virtual 3-D model of the knee. It’s virtual surgery, but it’s real anatomy.

“This allows a student to practice any procedure often, just as pilots practice emergency procedures in a flight simulator,” said Lawson. “We want to push the edge of anatomy education.”

Living with the Visible Human: "It's a fascinating system."

For his part, Lawson, who has spent six years working with the Visible Human, now sees the human body in a new light.

“Why do people get grossed out by the insides of their bodies?” he asks. “Really, when you look at the body, it’s a fascinating system of enormously complex, interconnected things.”

Things that are now visible to anyone—thanks to the Visible Human.