Home / News / Why I chose the Graduate School at CU Anschutz

When Anthony Mangan decided to apply to graduate school, he did what any good researcher would do—he did his research.

All nine interviewed him. All offered appealing financial incentives.

“I had amazing institutions to choose from, and they definitely made me feel wanted,” Mangan said. “I picked the place where I felt I fit in best, could advance my career, see myself succeed professionally and would enjoy living for the next five to eight years of my life.”

That place was the Graduate School at CU Anschutz where Mangan is now starting his fourth year of work in the Molecular Biology PhD program, one of more than two dozen master's and PhD programs featuring interdisciplinary teaching, research and clinical facilities at CU Anschutz.

Some of Mangan's  family, all of whom live in upstate New York, had to consult a map to figure out where he was headed, but he has never looked back.

“I knew from the first time I stepped on the campus this was the place for me,” he said. “The graduate students and faculty here were sincere, happy, welcoming and passionate about their work.”

Mangan grew up one of seven children in Syracuse, N.Y., where everyone worked in the family business—a small corner grocery store. At St. John Fisher College in Rochester, N.Y., he, graduated in four years with two degrees—a BS in Biology and a BS in Chemistry. He was the first person in his family to graduate from college—and he did it with honors. After spending a year doing volunteer work with refugees and immigrants in Syracuse, he earned a master’s degree in biochemistry from Rochester Institute of Technology and then decided to look across the entire country for the right place to pursue a PhD. 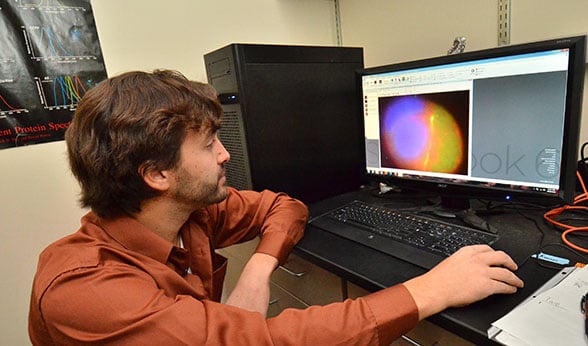 With nine offers in his pocket, Mangan could go anywhere in the country, but he was attracted to Denver because “it’s a big city with a small city feel.” Ultimately, it was the quality of the science that sold him. “I did my research about the programs and faculty, and I was impressed by the work being done here,” he said.

Mangan liked that the research at CU Anschutz is done in newly built labs strategically positioned to promote collaboration with clinical care available on the two campus hospitals. But the clincher for him was what he called the “family atmosphere” at CU Anschutz.

“That was important to me because I was moving across the country and leaving my family behind,” he said. “The atmosphere here was less competitive and more collegial, and I knew that not only would graduate students work together, but we could also hang out together on weekends.”

Mangan is working under the direction of Rytis Prekeris, PhD, studying the mechanisms of cell transport and polarization. Since coming to CU Anschutz, he has been credited as an author on several papers, spoken at the American Society for Cell Biology annual international meeting, received an NIH training grant through his program and earned the Howard Hughes Medical Institute Gilliam Fellowship. In his spare time, he volunteers at local school science fairs and roots for the Broncos and Rockies. And he continues to celebrate what, for him, was the right choice: CU Anschutz.

“Every year I’m here, I achieve more milestones in a successful career.” 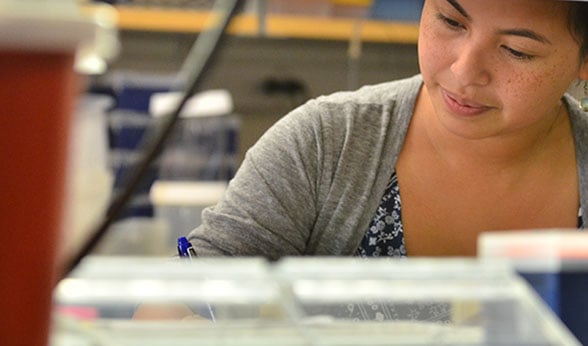 After working for two years as a technician in a DNA sequencing lab, Jenny Mae Samson had an epiphany. “I did not want to spend my life working as a technician,” she said. “I loved my work, but I wanted more control. I needed to step up my academic credentials to get there.”

She had trained graduate students in the lab, so she had a clear vision of what was important to her in a graduate school. She applied to the UMass Amherst, the University of Vermont, Massachusetts Institute of Technology, University of Washington, UT Southwestern Medical Center and CU Anschutz.

In the end, the decision came down to choice between Vermont and CU Anschutz. “Both had everything I was looking for,” Samson said. “But I just liked the feel of the people at CU Anschutz. Everyone was kind and accommodating, the area felt more diverse than Burlington [Vermont], and I wanted to be a part of that growing community.”

Samson did her undergraduate work at the University of Washington with a major in biochemistry and two minors, one in chemistry and one in art history. Her parents, both trained clinical laboratory scientists, wanted her to become a doctor, and she debated entering an MD/PhD program or a PhD program. What sold her on CU Anschutz was the breadth of the science available.

“I am interested in a huge array of topics,” she said. “Here, I don’t feel limited.”

Samson is in her second year of the Cancer Biology PhD program. In her rotations, she studied transcription, lung cancer and brain cancer. This past July, she committed to studying autophagy in the lab of in the lab of Andrew Thorburn, DPhil. She describes all her rotation mentors as “phenomenal.”

“I’m doing work that matters,” she said. “At CU Anschutz, we work with clinician scientists and can see our work in action in hospitals every day.”

Samson plans to someday become a principal investigator, and with the training she is receiving, she thinks she is well positioned to see her goal fulfilled. For now, she continues to praise CU Anschutz as the right choice.

“I chose a place where I could continue to enjoy both science and life,” she said. “I’m happy, and if, as a grad student, you can say you’re happy, that speaks volumes.” 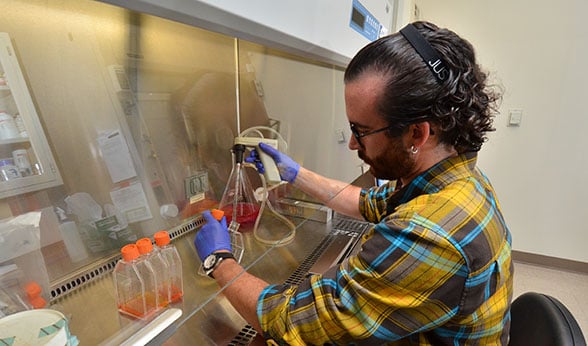 Scott Wemlinger is doing his graduate work on the same campus that he remembers visiting as a small boy with his grandfather who, as a veteran, had access to the Fitzsimons Army Medical Center to play golf and go swimming. Even while the Anschutz Medical Campus was being built on the old army medical base, Wemlinger wanted to be part of it. He was the first in his family to earn a college degree, and with a BS in Biology from Metropolitan State University, he began working at CU Anschutz doing research in neurology under Jeffrey Bennett, MD, PhD, all the time thinking about graduate school as the logical next step.

“I had an urge to be more independent, develop my own ideas and do my own research,” he said. “I wanted to be challenged more and be in a position to contribute to the field.”

“I struggled to find a breadth of immunologic research in my field,” Wemlinger said. “At CU Anschutz, I think we have one of the top immunology programs in the country. And they said to me ‘Please stay here.’”

Today, Wemlinger is in his second year of his PhD in Immunology researching multiple sclerosis (MS) and neuro-inflammation in the laboratory of John Cambier, PhD. He has his eye on finishing his PhD in 2019 and then seeking post-doctoral work before perhaps returning to CU Anschutz as a faculty member. “I have history here now,” he said. “I have set up collaborations with people I met working here.”

Wemlinger chose CU Anschutz because he dreamt that he would be mentored by top-flight faculty. He says that has happened, and even more important to him, he has been allowed to do work that could have real therapeutic impact for MS patients. Ultimately, he praises what he calls the “happiness factor” as a selling point for staying at CU Anschutz.

“This is a happy place to be,” he said. “I think of some research centers in this country as places where everyone is a competitor. Here we are collaborators. We are a family.”