The Colorado-based Wolfpack Ninjas, which is based on the popular NBC show “American Ninja Warrior,” visited the Anschutz Medical Campus on March 30. The College of Nursing’s Office of Clinical and Community Affairs hosted the event. Attendees were treated to healthy snacks and gift bags promoting the college’s nurse-managed community clinics: Campus Health Center, Sheridan Health Services, and CU Healthcare Partners at Belleview Point.

Wolfpack Ninjas is an organization devoted to helping America’s kids get healthier and tackle childhood obesity. Wolfpack member Brian Arnold gave a presentation to more than 75 members of the CU Anschutz and Aurora communities in attendance. During the “How to be a Ninja” presentation, Arnold described the tenets of ninjahood, including dedication, endurance, power and balance. “You have to train like nobody else if you want to be better than everyone else,” he said. 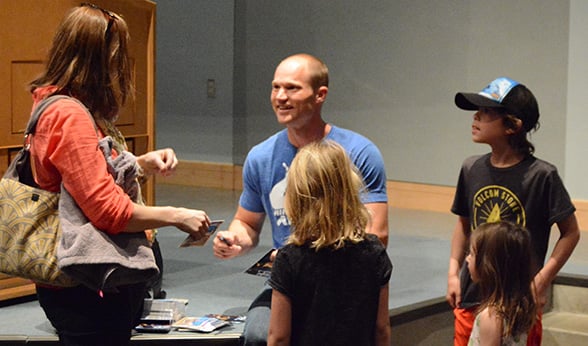 There were many children in the audience who enjoyed the videos Arnold showed, particularly one about how his house has been rebuilt for optimal training. In the video, Arnold walked into his front door and proceeded to swing from straps that hung from his ceiling all the way to his refrigerator, retrieve a drink, and swing to a seat in the living room. The apelike performance garnered laughter from the young attendees.

Arnold also demonstrated a balancing exercise on a piece of equipment he uses called an Indo Board, which mimics the motion of surfing and helps him train to keep himself steady on the often slippery “American Ninja Warrior” obstacles.

After the presentation, Arnold took questions from the audience. When asked to describe his favorite part of being on “American Ninja Warrior,” he said, “I love the process of making myself better. I love the contestants. You get to meet a lot of people. I love to meet people on the same road to self-improvement that I am on.”

The next stop for the Wolfpack Ninjas is the University of Denver on April 29-30, when Arnold will join the rest of the pack, including Wolfpack President Noah Kaufman, MD, a physician who works at UCHealth locations in northern Colorado.

At University of Denver, there will be obstacle course competitions and demonstrations, as well as kids’ classes and a health fair. Proceeds benefit Children’s Hospital Colorado.