Home News Women in STEM discuss challenges back to News

Breaking down gender-based barriers and promoting diversity in STEM were discussed as strategic imperatives at a recent event, “Women as Innovators: Creating Success in the Workplace,” at the CU Anschutz Medical Campus. About 50 students, faculty and staff attended the full-day session, which was hosted by the Department of Bioengineering in the College of Engineering and Applied Science at CU Denver.

The event featured a lineup of professionals, each sharing a unique perspective on academia and industry in STEM disciplines. Attendees were encouraged to network and engage in open discussions about challenges faced by women in STEM.

From an idea to full-house reality

“The idea was conceived on the fly,” she said. “We thought to ourselves that we should put a day together to discuss troublesome issues and promote an open dialogue. And if 10 students show up, then it’s a success. Wow. Look at us now.”

Kate Hoch, director of finance and administration for the Department of Bioengineering led the efforts to put the event together.

“I love having a relationship with the students,” she said. “Just one morning, we were talking to and coaching one of our student workers who brought up several experiences she has faced as a woman in a predominantly male discipline. The dynamics can be very tricky, and we decided to put together a symposium for our students.”

A focus on women in bioengineering

Robin Shandas, PhD, professor and founding chair of the Bioengineering Department, spoke of the importance of inclusivity. 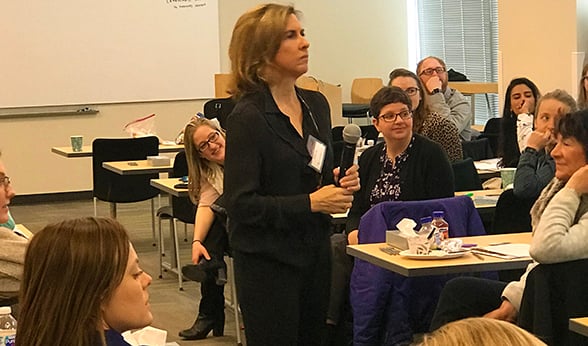 Trish Lay, of Souls at Play, leads a discussion during the ‘Women as Innovators’ event.

“I’m really pleased to see an event like this take place,” he said. “Diversity in generating technology is not just a feel-good kind of thing. It is a strategic imperative.”

“I want to have more of a conversation about issues that are concerning to us – aggressive behavior and bias,” she said.

Flores shared her experience of moving from Puerto Rico to Mobile, Ala., as a female doctoral candidate in a strange, new environment.

“I was incredibly successful but had to deal with unanticipated issues like cultural taxation, discrimination and microaggressions,” she said. “They are all very impactful. They contribute to getting burned out and to a not-so-great work environment.”

Flores followed with tips for dealing with each of these difficult situations.

“Break the silence and have courageous conversations,” she said. “Stay engaged. Speak your truth. Experience discomfort.”

Our women in bioengineering

Lana Bowers is a dual-degree BS-MS bioengineering student. While simultaneously completing her senior year of undergraduate and first year of master’s course work, she helped organize the event.

“Women are usually underrepresented in engineering,” said Bowers. “I think it’s important to have an event like this to show women how to effectively express their ideas when operating in such a field .”

Rachelle Walter received a bachelor’s degree in bioengineering from CU Denver and will finish her master’s in bioengineering in the next few months. She was part of the conversation that brought this event to fruition and was one of the main organizers. 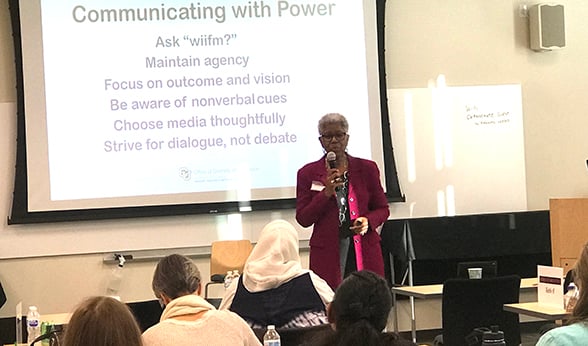 Brenda Allen, PhD, vice chancellor for diversity and inclusion, gives a talk at the ‘Women as Innovators’ program.

“I’ve had bad experiences in industry which is why this event was so important to me,” said Walter. “I’m very fortunate to have a lot of strong women in the department who are great mentors and know their worth. I’m excited to continue my journey as an alumni after having such great role models.”

The day culminated in the talks given by executive leadership at the University of Colorado Denver | Anschutz. Brenda Allen, PhD, vice chancellor for diversity and inclusion, presented “Communicating Power in Higher Ed,” and CU Denver Chancellor Dorothy Horrell, PhD, was interviewed about the challenges she has faced as a woman in leadership.

In a survey of attendees, one participant said, “The seminar was wonderful, insightful, honest and had a bunch of amazing, successful women. Thanks so much for putting it together!” and several attendees requested that this become an annual event offered to an even larger audience.