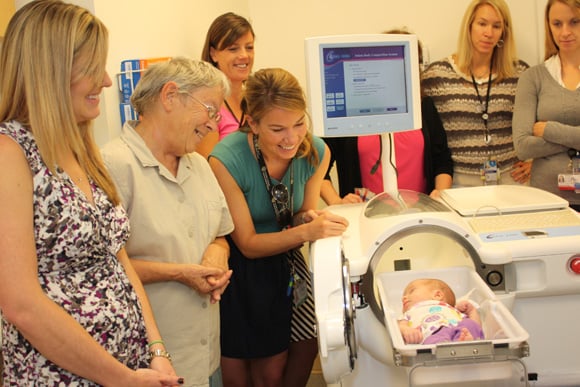 “They think they can’t eat toast. That’s what killed me,” says Teri Hernandez, PhD, RN. “Pregnant women don’t feel well in the morning. If they can’t have toast, what can they eat?"

The confusion over what pregnant women could eat was just one of the factors that motivated Hernandez to begin research into fetal programming.

Fetal programming works to improve the environment inside the uterus. This aids the growth pattern of a fetus and, in turn, improves the chances of a child not developing diseases later in life.

Supported by a grant from the National Institutes of Health, Hernandez’s latest study focuses on a high-risk group of women suffering from gestational diabetes (GDM), which is diabetes that develops during pregnancy. Around half of GDM sufferers will develop diabetes within 10 years of their pregnancy. The more pressing concern for Hernandez is the risk that gestational diabetes poses to unborn babies.

Historically, these women were advised to avoid dietary carbohydrates, which are thought to reduce the chances of their infants being born too large. Often, however, this approach led to fear of carbs and higher fat intake.

Results from the study of 16 women with GDM indicate that these moms-to-be don’t need to avoid carbs if they choose the right ones. 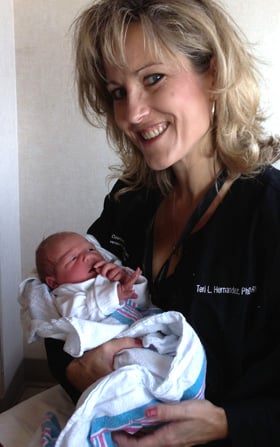 As a cardiac nurse, Hernandez, assistant professor of medicine and nursing at University of Colorado Anschutz Medical Campus, is ultimately interested in preventing heart disease. As the relationship between cardiovascular health and glycemic health is now more understood, her research has become vital.

“I’m so worried about these women and their babies,” she says.

The scale of obesity and the growing number of children who develop eating problems are pressing concerns for Hernandez.

“It’s an intergenerational epidemic,” she says. “Sixty percent of women are obese and their babies are then at risk. Their babies are being born with higher fat mass, leading to metabolic syndrome. It creates a perfect storm for these children to develop heart disease and diabetes later in life. These kids with metabolic syndrome and now Type 2 diabetes are now flooding our clinics. It pains me, as we never used to see this problem in kids.”

Because of this, Hernandez’s research focuses on diet.

In 2002, Hernandez became concerned by the amount of fat that expectant mothers were eating. The high-fat diets were stressful for both the moms-to-be and Hernandez. “My arteries were hardening as these women were talking to me,” Hernandez says.

She quickly realized pregnant women were being told to eat that way.

“If a pregnant woman has gestational diabetes, the first thing a doctor does is put her on a diet. Historically, that diet has been restricted in carbohydrates because they increase blood sugars."

The carbs have to be replaced by something else. Typically, this has been fat.

Carb-restricted diets are not a new concept. One hundred years ago, before insulin, Hernandez says, doctors kept diabetes sufferers alive by avoiding carbs.

What is important, Hernandez explains, is the type of carbohydrates that pregnant women should consume--whole grains, legumes and other carbs that are lower in simple sugars.

Food was provided for each participant.

“On this campus we have a great research infrastructure,” explains Hernandez. “We have a metabolic kitchen in the Clinical Translational Research Institute, where they make all of our food. They weigh it to the gram, so we know exactly what the women are getting.”

By providing the food, Hernandez could be sure that the study participants really were following the diet and didn’t have to count their carbs.

Both diets developed by Hernandez met the set targets for glucose control.

“All the arrows are pointing to our carb diet as being healthier and making a difference on many different levels,” she says. “The babies who were exposed to the carb diet for the longer period of time had less body fat percentage. Even I was shocked by the results.”

The National Institutes of Health has provided a grant to fund five more years of research to track babies through their first year.

“Babies are supposed to be fat in their first year,” Hernandez says. “But there’s a line, and we need to find out where that line is.”

For Hernandez, the most exciting aspect of the results so far is the fact that the diets offer pregnant women choices. Toast is back on the menu.