Join us at this virtual ceremony as we recognize our awardees’ remarkable work and careers. 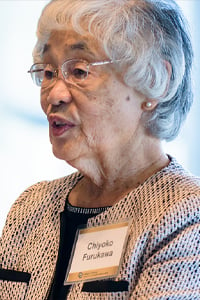 Chiyoko Furukawa, PhD, MS ‘72, BSN ’65, RN, has demonstrated a profound dedication to her life’s work and a commitment to advancing the careers of nursing students.

After graduating high school, she completed pre-nursing courses at Weber State University in Ogden, UT. When she moved with her late husband, Paul, to Boulder, she took the opportunity to pursue a bachelor’s degree in nursing at the CU School of Nursing. “I was amazed and inspired to learn about the various scientific advances that impacted the nursing practice,” recalled Furukawa. “This new knowledge was lacking in my previous education, and was a challenge to incorporate, yet greatly prepared me to become a future leader in nursing.”

After completing her bachelor’s degree, Dr. Furukawa accepted a position in home health care with the Boulder County Health Department and began providing nursing services for homebound elders. She would later pursue a master’s degree in nursing sciences at CU Nursing. Following this career choice, she decided to rejoin the academic community. She went on to teach graduate and undergraduate nursing students at Wright State University College of Nursing and Health in Dayton, Ohio, and then at the University of New Mexico College of Nursing.

Throughout her career, she was aware of the lack of geriatric nursing curriculum and the great need for geriatric nurses, despite vast experience among nurses in caring for the elderly. In response, she became a certified clinical nurse specialist in gerontology and established a master’s degree program in geriatrics at the University of New Mexico College of Nursing. There, she also created the Center on Aging, which provided geriatric education to health professionals statewide.

Motivated by a desire to pay her success forward, Furukawa continues to guide aspiring nurses into careers that care for older adults through the Chiyoko Furukawa, PhD Scholarship Fund at the CU College of Nursing. “I am grateful for my CU education, which provided the foundation for a satisfying career in nursing,” said Furukawa. “It gives me great pleasure to be a small part of students’ successful futures as nurses. Hopefully, these students will experience the joy of learning and soon a career in which they can help those who need a nurse’s care and expertise.” 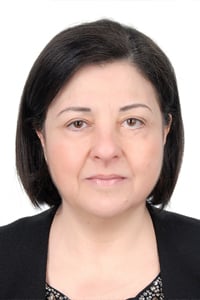 Nuhad Dumit. PhD ’08, earned her Bachelor of Science in Nursing and Master’s in Art, Education Policy and Foundation at the American University of Beirut (AUB) in 1980 and 1994 respectively. In 2008 she received her PhD in Nursing at the University of Colorado College of Nursing.

Dr. Dumit has held several academic and administrative positions. Currently, she is an associate professor of nursing, the convener of the undergraduate division, and the coordinator of the MSN Administration and Management track at the AUB School of Nursing. She also serves as the co-director of the Continuing Medical Education Office at the Faculty of Medicine at AUB since 2011, where she leads the office into moving from three CME activities to more than 70 for medicine, nursing, pharmacy, pathology, clinical nutrition, physiotherapy, radiology, and quality administrators.

Dumit’s research work mainly addresses the nursing workforce issues such as migration, recruitment, and retention, and sickness absence among nurses. Other research relates to cardiac illness in adults. Additionally, she led two research projects for the United Nations Population Fund related to reproductive and sexual health and HIV services.

Recently, the WHO Eastern Mediterranean Region Office (EMRO) has consulted with Dr. Dumit on writing a report on nursing education in the 22 EMR countries based on desk review and survey study collecting data on nursing education (2019-2020). Dumit was also asked to review the program proposed by WHO EMRO on integrating SDG 3, Universal Health Coverage and Health Systems in undergraduate health disciplines curricula (2019).

In June 2015, Dr. Dumit was elected as the President of the Order of Nurses in Lebanon (June 2015-June 2018). The Order is the sole regulator of the nursing profession in the country. Throughout her career, she has received several honors and awards at the university, national and international levels including the “Distinguished Nurse of the Year in Nursing Education” award by the Order of Nurses in Lebanon and the World Health Organization in 2006, and the “Teaching Excellence Award” by the American University of Beirut in 2007.

Karen Johnson, PhD, RN, BSN ’07, FSAHM, FAAN, is an Associate Professor at the University of Texas School of Nursing. She was recently inducted as a Fellow in the Society for Adolescent Health and Medicine, and she is a Fellow of the American Academy of Nursing.

As a highly regarded educator at the University of Texas, she has developed a very strong program of interventional school-based research to improve the lives of at-risk youth and has engaged in several policy initiatives to address teen health. 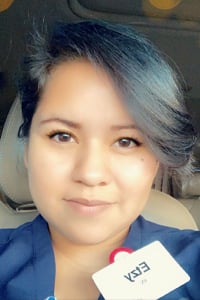 Etzany Diaz Ocampo earned her BSN in 2018 from the CU College of Nursing. Ocampo’s journey to nursing began fifteen years ago when her younger sister was diagnosed with cancer. Intimately involved in her sister’s care, Ocampo would interpret health care instructions for the family. At the time, her sister recognized Ocampo’s skills and said, “One day, you’ll be an amazing oncology nurse!”

Born in Mexico, Ocampo received Deferred Action for Childhood Arrivals (DACA) relief in the United States. Throughout her education, Ocampo’s parents pushed her to do well in classes and attend college, even if that meant they had to work extra hours to afford it. Ocampo was the first in her family to graduate from high school, go to college, and ultimately graduate from both.

Today, Ocampo is married with two wonderful children. She serves as an oncology nurse in honor of her beloved sister, who Ocampo describes as the “rock and foundation” of her nursing career.