For the next 10 months, University of Colorado College of Nursing alumna Heather Mena (MSN, ’18) will roam the jungles and traverse the hills of Ecuador, learning the tricks of her trade from native women intent on saving their ancestral tradition.

Mena, a certified nurse-midwife passionate about integrating her field more widely in this country and theirs, recently won the prestigious Fulbright award for researching the practices and traditions of the midwives of Ecuador.

She joins about 2,100 recipients of the highly competitive Fulbright awards who will teach, research and provide expertise for the 2019-2020 academic year. Fulbright recipients are selected based on academic and professional achievement and work on building lasting relationships with other countries.

“The indigenous culture and midwifery traditions are really important here,” said Mena, who recently began her work in the South American country with her husband and two youngest children happily in tow. “And it’s kind of a dying art in Ecuador.”

Mena, who has worked as a registered nurse for 12 years, most recently at Children’s Hospital Colorado in pediatric intensive care, became interested in the midwives and their struggles while serving in the Peace Corps 15 years ago.

“Heather's interest is important not just for midwives in Ecuador, but in the United States and around the world, said Denise Smith, PhD, specialty director of the University of Colorado Nurse-Midwife Program and one of Mena’s professors. “Maternity care sets the foundation for the health and well-being of the population as a whole,” said Smith, who supported Mena’s Fulbright application.

Group of native women pushes for equality in care 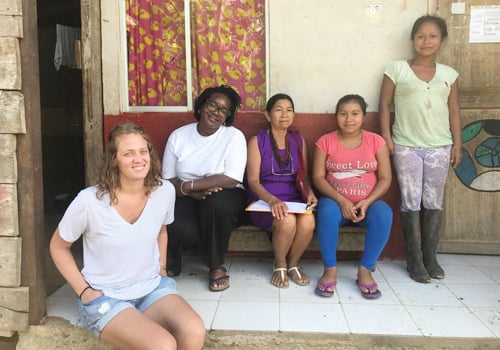 Currently, Mena is working with an organization of native midwives in Ecuador called AMUPAKIN in the northern Amazon region. Many of them elders, the women learned midwifery skills and medicinal plant uses from their mothers and grandmothers and have continued the centuries-old tradition amid modern pushback.

As the proliferation of Western medicine began threatening their tradition, the women formed the organization in hopes of raising awareness of midwifery and preserving their valuable knowledge. They focus on helping fellow citizens who lack resources receive equal prenatal and birthing care while saving their profession.

“Right now, we’re working on a project to provide free assistance to 20 pregnant women in the community,” Mena said. As she and the midwives seek participants, they educate community members.

For centuries, these native midwives have honed unique skills, including creating effective elixirs from the abundance of plants that surround their jungle homes. They use plant-based medicines cooked over their fires and stoves for everything from morning sickness to bathing newborns for “strength.”

Other skills include repositioning babies in the womb to help prevent C-sections and other complications and using birthing positions, such as standing, to aid in quicker, uncomplicated births.

“This opportunity will allow me to continue growing and learning as a midwife, and also carry on their ancestral wisdom,” said Mena, who will also visit the mountain and coastal regions of the country, studying differences in midwifery in other areas.

“I think it’s really important to the profession of midwifery just to get the word out about what midwives do. Midwives are all over the world in every country with different levels of knowledge and understanding, and they all have one common goal of helping women and supporting them in childbirth.”

The U.S. Fulbright Program, funded through an annual appropriation made by Congress to the U.S. Department of State, operates in over 160 supporting countries.