When Captain Taylor Allen, BSN, RN, arrived in Denver in March for an internship with the Colorado Department of Public Health and Environment (CDPHE) before entering CU Nursing’s Master’s program, she never thought her army experience would be in demand. Boy was she wrong.

“The day I arrived, Colorado declared a state of emergency because of Covid-19,” said CPT. Allen.

Instead of being assigned to newborn screenings as anticipated, she was reassigned to the SEOC (State Emergency Operations Center) where she provided insight on nursing needs for the new field hospitals the state ordered in response to the pandemic. The hospitals are anticipated to be used for patients who are no longer in need of critical or intensive care but are convalescing prior to discharge home.

Her background working at the 28th Combat Support Hospital, helping organize field hospitals for the Army and analyzing supply and equipment needs was crucial to ensure that the new field hospitals have the necessary equipment to meet the needs of patients affected by Covid-19.

“I created a scalable equipment plan for the alternate care sites to determine the needed inventory – what to order and the amounts to order. It is based on what epidemiologists think will happen. Their models help us decide what the hospital will need to operate optimally in this unique scenario,“ said Allen. Everything from the number of oxygen tanks to nasal cannulas to masks, personal protection equipment, and what fluids to order --- anything you can think of that is necessary to treat patients and help overburdened hospitals during this time.

“Having someone with her unique skill set and experience was an unexpected boon,” said Incident Commander Scott Bookman. “It was truly serendipitous. And we were lucky to have her.”

As part of the SEOC team, the Army Corps of Engineers consulted Allen on things like patient flow and the optimal height for oxygen for ease of use of the nurses at the newly converted Colorado Convention Center.

The construction miraculously took two weeks. Unheard of in construction today, “It was amazing. I’ve never seen anything like it before. They don’t just build and say, ‘there you go.’ They take into account the unique needs and build it out to specific specifications,” she said.

For Allen, watching the pace and professionalism and what they accomplished in two weeks was astounding. “People say government moves at a snail’s pace. That was not the case.” 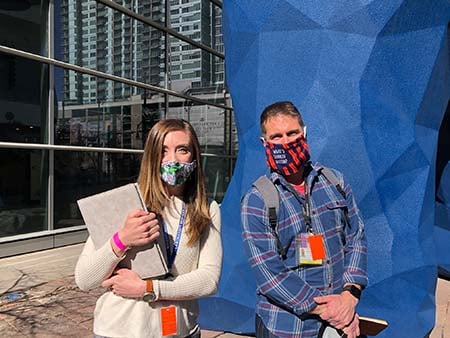 Allen and Harpin masked and in front of the newly converted
Colorado Convention Center.

Allen worked closely with CU Nursing faculty member Scott Harpin, PhD, MPH, RN, who was asked to consult on the surge workforce at the SEOC. His role included developing staffing and training needs of the field hospitals. His training videos for health care workers at the hospitals are required before staff can work at the facility. “Even though Dr. Harpin has not served in the military, he fit perfectly as he has a similar ‘can do’ attitude,” said Allen.

Reveling in making something “superhuman happen,” Allen said it was great to see real teamwork in action. “It was very collaborative, not authoritarian. The person with the best idea wins. Not the person who shouts the loudest or has the most experience. The truth is – who has experience with building in a pandemic? None of us.”

Next Steps for Allen

“This has been a great experience. It was an exciting place to be. I met and worked with such amazing people and am proud to have been able to use my skills for something this important,” said Allen.

Allen who has served in the Army since 2013, is transitioning to civilian life and will begin her education with CU Nursing in the fall when she starts the Master in Nurse-Midwifery program. She chose midwifery because during most of her Army career she worked in cultural support, specifically with women. While in Afghanistan with the assistance of a local interpreter, she provided much-needed outreach and health resources to the women in the community. “Being a woman and reaching out to women about their health needs established a level of trust and credibility, which in turn helped achieve Army goals,” Allen noted.

After helping to build something so big in such a short timeframe, Allen’s up for the challenge of the nurse-midwifery program.