Longtime friend and supporter, Henry Leopold Strauss, 93, passed away peacefully on April 8, 2021 at the home where he lived for the past 60 years. Strauss, RPh '51 leaves a lasting legacy with the University and Colorado and the Skaggs School of Pharmacy and Pharmaceutical Sciences, his alma mater. 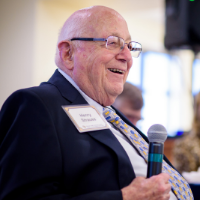 Henry was born in Hamburg, Germany in 1927. In 1933, as Hitler took power, his family left Germany for Spain, subsequently stayed a short time in Luxenberg, and then went to Denmark. They immigrated to New York in 1937 and came to Denver in 1939. Henry graduated from East High School and then CU with a degree in pharmacy in 1951 through the GI Bill after completing service with the U.S Army in 1947.

"I really didn't know much about universities because I was the first in my family to go to college. So I turned immediately to the best university in Colorado, and that was CU," Strauss said in a 2018 interview.

Strauss worked as a pharmacist for several years before making the transition to a distinguished career in business and government as an investor and developer, and active politician in Colorado. He loved to travel and continued to cross the globe well into his 80s with his second wife, Joan, whom he married in 1999. He had a special affinity for China and made 26 trips there from 1975 to 1990, promoting Colorado-Hunan relationships and seeking trade opportunities. It was during these trips he began to purchase books about Chinese medicine.

"While I'm very fond and supportive of American medicine, when I traveled elsewhere overseas I looked at what other countries were doing differently with all these remedies, such as acupuncture anesthesia, distinctive pharmaceuticals, etc.—and I realized we were missing the boat. The CU medical library at the time didn't even have one book on chiropractic therapy," Strauss remarked in 2018.

Strauss' generosity to CU focused on the education of future health leaders and their impact on communities, creating a scholarly base for people studying non-Western medicine and alternative medicine. His interests blended traditional Western medicine with therapies from across the world. What started with a donation of 10 books in 1987 has grown to over 4,000 volumes and other materials, becoming the Florence G. Strauss-Leonard A. Wisneski Indigenous and Integrated Medicine Collection. The collection is now housed at the Strauss Health Sciences Library, which was renamed in 2018 to honor Strauss and his wife.

As an extension of his interest in alternative medicine education, Strauss helped found the Integrative Health and Medicine (IHM) program at the CU School of Pharmacy in 2019. Offered through the School's Office of Continuing Education, the IHM certificate educates pharmacists and other healthcare professionals on the use of herbal medicines, non-botanical dietary supplements, and other related modalities in the treatment of human disease.

“Henry's devotion to the University and our School has truly made a difference in advancing the education of CU Pharmacy students. It's a profound reflection of the School’s mission around innovation and keeping pace with changes in the Pharmacy industry and modern medicine,” said Dean Ralph Altiere.

Strauss was granted an honorary doctorate degree in 2018, recognizing his outstanding contributions to the University.