Arjay Mendoza is an avid tennis player. He tries to play at least twice a week, at some newly renovated courts close to his house.

For Mendoza, it is an important time to unwind. Born and raised in the Philippines, Mendoza graduated with a Bachelor of Science in Pharmacy from the University of the Philippines Manila. He practiced pharmacy and taught at his alma mater, working to advance the field in the study of infectious diseases. 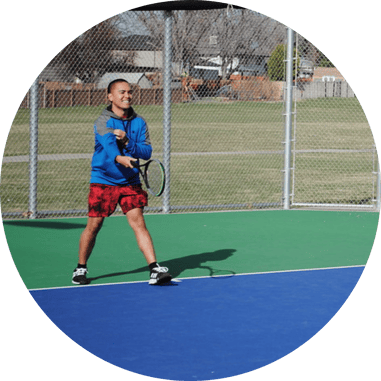 Today, Mendoza is a proud PharmD graduate from the University of Colorado Skaggs School of Pharmacy and Pharmaceutical Sciences, with the Distance Degree Program’s International-Trained PharmD (ITPD) program. He works at a retail pharmacy most days of the week, teaches part-time at American University of Health Sciences, and has been a featured lecturer at the University of the Philippines Manila.

In June, he reports to the San Diego Veterans Affairs Medical Center for a PGY1 residency, and he is in talks to extend his teaching position in the Philippines. Mendoza must be playing a lot of tennis.

“It’s really always been my dream to obtain a PharmD, and luckily the military offered a way for me to do that… I was able to go to school using the G.I. Bill,” he said.

Mendoza applied and was accepted to the Distance Degrees’ PharmD program in 2018 – while he was still in the military. For nearly all his schooling, he was a full-time student and a full-time service member.

“I was a Sergeant in the U.S. Army,” he said, “and my job was to manage dental clinics.”

Despite, or maybe because of his full plate, Mendoza is also a member of Rho Chi, the pharmacy honor society, and a student representative for the Distance Degrees Program.

“In the military, I learned how to be resilient. How to be adaptable and flexible to changes… it’s such an agile environment, things change by the minute and hour. I was able to apply those characteristics in pharmacy school,” he said. “And I have a good support system.”

In 2021, Mendoza got his AAHIVP certification from the American Academy of HIV Medicine, which allows him to manage HIV patients as a pharmacy provider.

Advancing pharmacy education in the Philippines is part of why Mendoza was a great fit for the ITPD program. Already a practicing pharmacist outside of the United States, Mendoza is now able to turn around and contribute to pharmacy education in his home country, as well as through the VA in the U.S. His interest in HIV is also incredibly relevant; according to the University of the Philippines Manila, although the prevalence of HIV infections has gone down by 25 percent in most parts of the world, HIV in the Philippines has gone up by more than 25 percent in the last ten years.

“The San Diego Veterans Affairs Medical Center has a PGY2 in Infectious Diseases, and so I wanted this residency to be able to serve my fellow veterans. I have gotten great care through the VA, and I want to extend this same quality of care,” Mendoza explained.

Of his time in the military, he says he would not change a thing.

“It has prepared me, not only to be a good soldier, but to be an independent leader and give back to the community.”