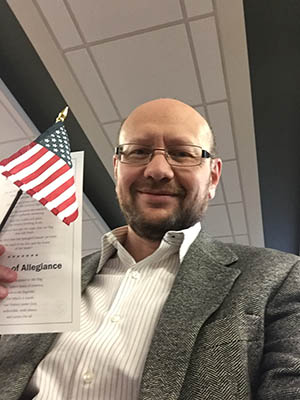 Assistant Professor Dmitri Simberg and his wife, Elina, moved to the United States in 2004 and became American citizens this year. It was a long journey, but one that would be well worth it.

“I was born in Russia during the Soviet Union, and never really thought about leaving the country,” said Dmitri.

But after the collapse of the Soviet Union, Dmitri made the tough decision to leave for Israel.

“I was in Moscow studying medicine; I had completed basically three years of MD studies,” said Dmitri. “It was in about the 1990s that Russia had a change of power and the Soviet Union collapsed, so I decided to leave and go to Israel. And at that time, people who left Russia were considered traitors.”

It was in Israel that Dmitri decided to become a pharmacist. He enrolled in pharmacy school at the Hebrew University in Jerusalem.

“There, you do three-and-a-half years of studies and half a year of pharmacy experience to get a P.Pharm. degree,” he said. “And while I was there, I started working at Super-Pharm, which is a retail pharmacy chain a lot like CVS and Walgreens.”

But soon enough, Dmitri recognized that instead of selling medicines, he wanted to develop them in academia, and got a PhD is biochemistry at the Hebrew University.

“After my PhD, I felt like I wanted to get experience in the scientific environment in the USA,” said Dmitri.

So, Dmitri and Elina (whom he married 2 months before) packed their bags and their yellow lab, Mira, and began their trek to America.

The road to America

For two years, Dmitri and Elina worked in La Jolla, CA – Dmitri at the Burnham Research Institute (now Sanford-Burnham-Prebys) and Elina at Pfizer.

“We missed Israel and our families, but after our son, Benjamin, was born in 2006, we started to think about staying in the States. The life is safer here, and there are more academic opportunities for me in the US than in Israel.

“I still had a couple of options to go back to Israel; I had a professor position offer at the Hebrew University, but somehow, I felt that a lot of time had passed, and then our daughter, Sarah, was born here, so we felt already that – at a certain point – there’s no turning back.”

Having been living on the H-visa, the Simbergs applied for a Green card, which is the first step in the process of becoming American citizens.

“We had this workshop at the University of California San Diego where a lawyer told us that we had to prepare a file of our scientific achievements, cite our papers, collect recommendation letters from famous scientists and, really, prepare this beautiful, colorful, huge folder for the immigration officer,” said Dmitri.

“I worked almost six months on this project, and then my lawyer finally – based on these letters – wrote a letter petitioning the immigration office. When I read this letter describing my achievements, I couldn’t believe it was about myself!” he laughed.

Following approval of their Green card, Dmitri and Elina had to wait five more years before they could apply for citizenship – all the while preparing for the exam.

“You have to know things like when the Declaration of Independence was written, how many judges are in the Supreme Court – you have to know all these details, so it was really interesting for us, because we didn’t know many of these things,” he said. “Even at night, I would wake up my wife and say, ‘Tell me why the Civil War started?’ and she would wake me up and ask, ‘What are the basic laws of the land?’ We took it very seriously!”

“And then at a certain point we got invited for the interview – we passed the interview, and then they brought a bunch of us – of people who had naturalized – to a big room with the flag, and we sang the anthem, and they gave us very nice, beautiful document certificates, and there was a lot of relatives from all over the world. They brought this mix of people from all over the world – from Canada to China, Russia, even Mongolia – about 40 different countries. It was a very touching moment.”

And just like that, 12 years later, Dmitri and Elina were officially American citizens.

Diving Into the Minute Details of Nanomedicine

This summer, Dmitri Simberg and Tom Anchordoquy from CU’s Skaggs School of Pharmacy and Pharmaceutical Sciences and Moien Moghimi from the University of Copenhagen organized the school’s first-ever Mechanisms and Barriers in Nanomedicine workshop in Breckenridge, Colo.

With more than 70 students and faculty members in attendance, the workshop explored nanomedicine mechanisms, problems and solutions, with an emphasis on teaching future professionals the research history and the evolution of the field.

“We wanted to bring together post-docs and experienced leaders within the field to provide a learning opportunity and give perspective to what’s going on in the field and where we should go,” said Simberg. “The students really learned a lot.”

Topics ranged from fundamental issues in nanomedicine to tumor-penetrating peptides to nanoghosts in gene delivery, and promoted open, informal discussions in addition to a poster exhibit.

"Indeed, this was one of the best meetings I attended in the last two years. The selection of speakers, topics and participants was excellent, and there was enough time for discussion,” said Chezy Barenholz, a professor at the Hebrew University in Israel.