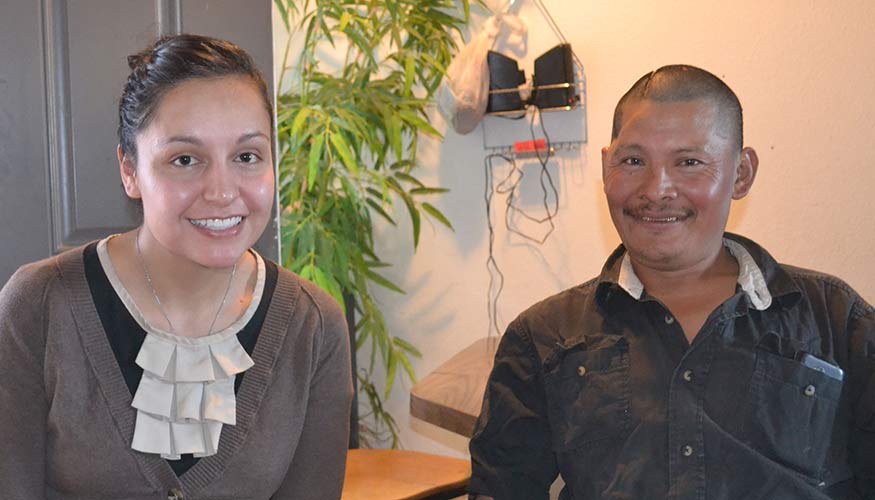 Eduardo Ramirez had no idea his life would change so dramatically in September 2013 when he was jumped by four men and brutally beaten. The incident would leave him needing brain surgery. Anticipated to cost thousands of dollars, it was an operation the construction worker simply couldn’t afford.

After being stabilized in the emergency room, Ramirez was sent home with a helmet protecting the large gape in his head.

In the days following, Ramirez sought assistance from his local church, eventually leading him to Claudia Corona, now a third-year pharmacy student at CU’s Skaggs School of Pharmacy and Pharmaceutical Sciences.

“Eduardo reached out to the priest at his church, and the priest tried to get Medicaid for him, but he was rejected,” said Corona. “After that, they contacted Rich McClean who is the community worker here, and he got in contact with me, and through our partnerships with DAWN, we were able to get Eduardo into the clinic.” Because Corona is bi-lingual, she acted as his interpreter in addition to patient navigator.

The DAWN Clinic – Dedicated to Aurora’s Wellness and Needs – was created by University of Colorado Anschutz Medical Campus students from all disciplines. Under the supervision of a physician and medical professionals, it serves underserved people in Aurora, specifically patients who do not have health insurance.

“Everybody at DAWN has a different vision in mind – it’s not just to provide the care that we can provide people; it’s going beyond and finding how to really provide the best care,” said Corona.

Corona, along with others at DAWN, fundraised the money Ramirez needed for his surgery. “It became a community-wide effort,” said Corona.

“I’m thankful to God for them. I have no way to repay them. They help the community a lot, and they helped me in a time when they didn’t have to, but they did it anyway,” said Ramirez.

Others benefit from DAWN

The DAWN Clinic, open every Tuesday from 6-8 p.m., opened March 3, 2015, and served its first patient that very night – an elderly Korean woman found wandering the streets in her nightgown and slippers, bleeding from her foot and knee. Lost and confused and unsure of who or where she was, CU Pharmacy student David Choi was able to speak Korean with the woman and guide her into the DAWN Clinic. There the students treated her, tracked down her retirement home, and returned her safely to the facility.

“The things that I’ve learned at DAWN, I don’t think I could have learned in regular practice, because regular practice – depending on where you are, you might not see the kind of cases that we have at DAWN. We get to see really extraordinary cases that should not happen,” said Corona.

Corona still sees Ramirez on occasion when he stops in for follow-up appointments.

“I think everybody who goes into healthcare has that idea in their mind that they want to do something that’s meaningful and that helps people, but I had no idea we would be able to get involved in this kind of case,” said Corona. “I mean, we always talk about improving people’s lives, and in this case that is obviously what happened.”