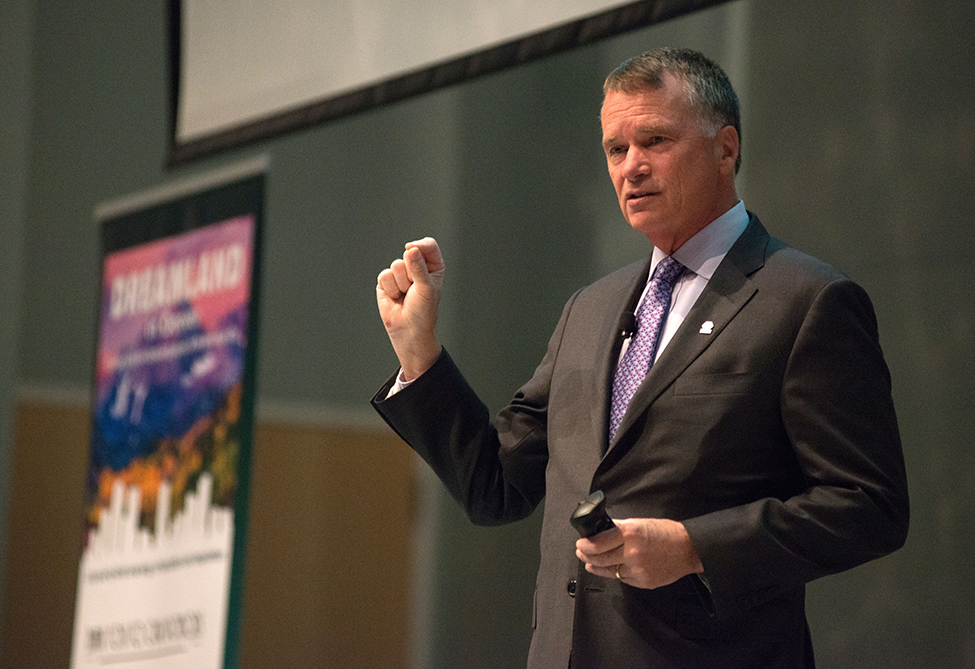 Most of what you know about opioid pain relievers such as Vicodin and OxyContin is wrong. Your perception of the type of person who becomes addicted to heroin and the underlying causes of the opioid and heroin epidemics might be wrong as well.

Correcting myths and challenging preconceptions were running themes during an evening of TED talk-style presentations about the opioid epidemic held at the University of Colorado Anschutz Medical Campus in January. The event, titled Dreamland in Denver, drew nearly 600 people and was organized by the Colorado Consortium for Prescription Drug Abuse Prevention and the Emergency Medical Minute. The University of Colorado Skaggs School of Pharmacy and Pharmaceutical Sciences, which is the home of the Consortium, was one of the event sponsors.

There are a lot of myths about opioids, according to Robert Valuck, PhD. One is that they’re more effective than other pain relievers, including the ibuprofen (Advil) and acetaminophen (Tylenol) you can buy over the counter in a drug store.

“It’s almost an urban legend that opioids are ‘the good stuff,’ the best pain relievers there are,” Valuck said. “That’s wrong.”

Valuck is a professor at the CU Skaggs School of Pharmacy and Pharmaceutical Sciences and is the director of the Colorado Consortium for Prescription Drug Abuse Prevention.

Valuck told the crowd there’s strong evidence that other medication is more effective, despite opioids’ reputation. Rotating ibuprofen and acetaminophen has been shown to decrease pain better than using opioids. That’s true even for people who undergo surgery or have a painful acute injury.

“Drug interactions are an extremely important and an underappreciated part of this epidemic,” Valuck said. A substantial number of accidental overdose deaths occur when opioids are mixed with benzodiazepines.

The biggest myth of all, Valuck said, is that medication can completely eliminate someone’s pain. The right treatment can decrease pain, and the medical community needs to work to correct patients’ expectations.

“We have to quit using the word painkiller, because we can’t kill it,” Valuck said. “We need to figure out how to manage and treat it.”

Jonathan Winnefeld didn’t seem like the type of young man who would die of an overdose. He came from a good family and was about to start college at the University of Denver. But the 19-year-old had battled addiction for years.

Jonathan died in September from an overdose of heroin laced with fentanyl. Jonathan’s death came three days after his parents helped him move into the dorms at DU, where he was to start his freshman year.

The Winnefelds shared their family’s story while introducing a new nonprofit they have founded called Stop the Addiction Fatality Epidemic, or SAFE. Their hope is that other families learn from their story.

One message the Winnefelds have been sharing is that opioid addiction can affect any family. Jonathan came from a military family—his father, James, is a retired admiral and former Vice Chairman of the Joint Chiefs of Staff, the second-highest ranking position in the U.S. military.

“We would never have predicted our son would fall victim to the scourge,” James Winnefeld said, adding the past few months have been “a living hell.”

The Winnefelds thought Jonathan had turned a corner in his fight with opioid use disorder. He had gone through more than a year of rehab and was excited to begin college. However, he relapsed shortly before starting DU.

Losing a child to the opioid epidemic puts the Winnefelds in “a club none of you ever want to be a part of,” Mary Winnefeld said. “Unfortunately, membership in this club is growing every day.” In 2017, an estimated 66,000 Americans died of an overdose.

The Winnefelds founded SAFE in November, shortly after James wrote an article in The Atlantic about what his family learned while trying to help Jonathan recover. Its goal is to use effective, evidence-based action to prevent overdoses and to mitigate the opioid epidemic.

“The poster drug of our time”

Investigative reporter Sam Quinones literally wrote the book on the opioid epidemic. “Dreamland: The True Tale of America's Opiate Epidemic” is an encyclopedic look at how drug dealers, pharmaceutical companies, doctors, and economic decline combined to create the epidemic.

Quinones had to overcome a misconception of his own when he started writing “Dreamland.” At first, he thought he was telling a true crime story. Instead, he found a more profound story.

In his view, the loss of community institutions, jobs, and the fraying of America’s social fabric are major contributors to the opioid epidemic. The connections that hold communities together have withered, contributing to isolation which feeds addiction.

Quinones recently testified before Congress, and he repeated his message at CU Anschutz. He thinks America needs a program like the Marshall Plan to rebuild communities that have been devastated by the epidemic.

People are taking action at the grassroots level by raising awareness and devoting more attention to prevention and recovery. He’d like to see the federal government offer more support, especially financial support.

“Help them along, give them the funding they need over the long haul, not just one year,” Quinones said. He thinks the grassroots efforts could mitigate the epidemic and repair the damage it’s caused.

“I think it’s a magnificent opportunity to correct some things and really make America great again,” he said.