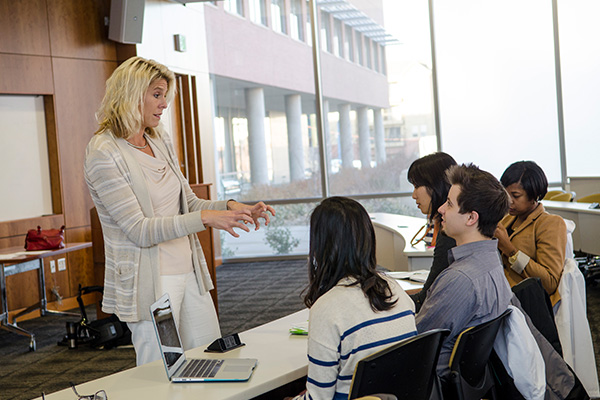 Governor John Hickenlooper announced an education effort to address the growing problem of the abuse of prescription drugs during a Feb. 24 news conference at the University of Colorado Skaggs School of Pharmacy on the Anschutz Medical Campus. The campaign titled “Take Meds Seriously” is aimed at reducing prescription drug abuse and misuse in the state and includes focusing on safe use, safe storage and safe disposal, and is part of a statewide effort by the Colorado Consortium for Prescription Drug Abuse Prevention to bring attention to the issue.

Grim statistics and recent surveys reveal how pervasive prescription drug misuse and abuse is in Colorado.  Thirty-five Coloradans died a month in 2013 from unintentional drug overdoses.  Nearly 224,000 Coloradans misuse prescription drugs each year.   At least a third of Coloradans surveyed admitted using medicine prescribed for someone else.  One in six of Colorado’s 12th graders have taken prescription medicine that was not written for them.  And Coloradans admit at least half their households have drugs that are unused or out of date.

The Governor even riffled through his own medicine cabinet and found five prescription bottles with nearly 100 pills dating back to 2008, which he brought to the press conference. According to Gov. Hickenlooper, “This isn’t atypical. Like many of you I generally don’t like to take pain medications. So, I put them away in my medicine cabinet and forgot about them.”  Immediately following the press conference, the Governor dropped off his unused and expired medications to the permanent prescription drug drop box, located at 12454 E. 19th Place in Aurora (the University of Colorado Police Department on the Anschutz Medical Campus). The drop box is one of 20 permanent boxes throughout Colorado and is part of the safe disposal program that the Consortium instituted.

“Colorado ranks 16th in the nation for abuse and misuse of prescription drugs," said Hickenlooper. "This campaign is just one part of a coordinated, statewide strategy that simultaneously restricts access to prescription drugs for illicit use, while ensuring access for those who legitimately need them. The messages and tools provided through this effort will help us take on this serious public health challenge, as part of our commitment to becoming the healthiest state in the nation."

Financing for the campaign was provided by the Colorado Attorney General’s Office. “We are proud to have contributed $1 million in seed money to support the Consortium’s work,” said Attorney General Coffman. “It is fitting that funds from settlements with major pharmaceutical companies to resolve charges of misconduct are now being spent to combat Colorado’s prescription drug abuse problem.”

A 2014 survey (link to survey) conducted for the Consortium by National Research Center, Inc., found four in 10 Colorado adults say they’ve misused prescription medicine, mostly painkillers, and a third of those adults used the medicine for recreational purposes.  Few Coloradans lock and store their medicine in places children can’t access it, and only one in 10 had returned expired medicine to a police or sheriff’s department.  Those surveyed expressed strong support for increased state funding in education to address the problem, as well as resources to deal with the “take-back” of drugs by law enforcement agencies. The University of Colorado Skaggs School of Pharmacy and Pharmaceutical Sciences will be hosting its annual prescription drug disposal day April 18 at 13001 E. 17th Place on the Anschutz Medical Campus (in front of Building 500/the old Fitzsimons Army Hospital). More information about the take back event will be available atwww.ucdenver.edu/pharmacy and TakeMedsSeriously.org sites.

The new campaign is an integral part of the Governor’s Colorado Plan to Reduce Prescription Drug Abuse, which, in keeping with its commitment to making Colorado the healthiest state in the nation, has set the goal of preventing 92,000 Coloradans from engaging in the non-medical use of prescription pain medication by 2016.  The Colorado Department of Public Health and Environment (CDPHE) will assist the Consortium with a coordinating role in the campaign.

The Colorado Consortium for Prescription Drug Abuse Prevention (Consortium) was created by Governor John Hickenlooper in the fall of 2013 to establish a coordinated, statewide response to this problem. The Consortium’s mission is to reduce the abuse and misuse of prescription drugs in Colorado through improvements in education, public outreach, research, safe disposal and treatment.

The Consortium serves as a backbone, providing infrastructure to link the many agencies, organization, health professions, associations, task forces and programs that are addressing the prescription drug abuse problem. It’s housed at the CU Skaggs School of Pharmacy and Pharmaceutical Sciences at the University of Colorado Anschutz Campus and coordinated by Professor Robert Valuck, PhD, RPh. The Consortium includes experts from the Anschutz Medical Campus health professional schools and colleges and leaders from key agencies and organizations in Colorado.