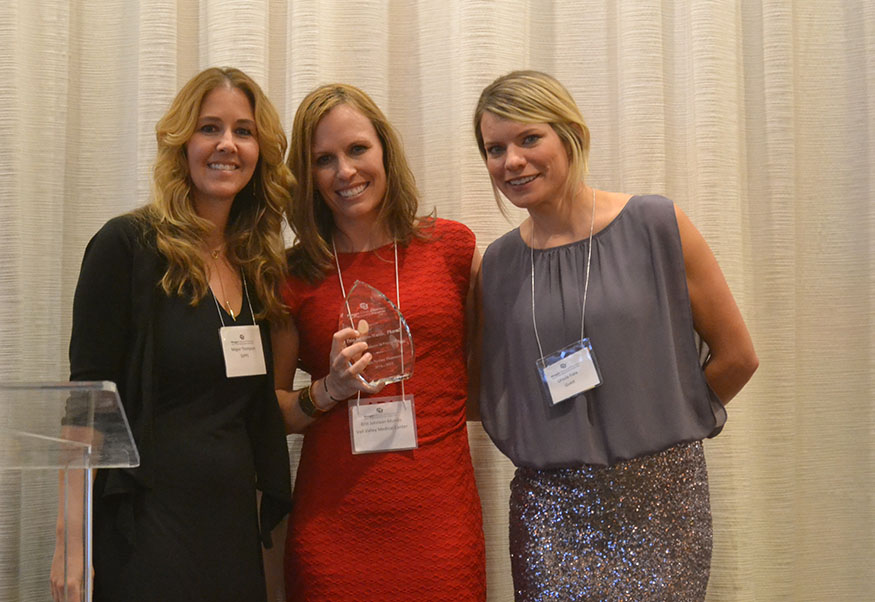 Home News "Truly an Exceptional Preceptor" back to News

A great preceptor doesn’t just give professional guidance and help mentees grow academically, they also help students grow personally and learn to believe in themselves. That’s exactly what Dr. Erin Johnson-Mundo does, and because of that is the winner of this year’s Health-System Excellence in Precepting Award.

"She is truly an exceptional preceptor," says University of Colorado Skaggs School of Pharmacy and Pharmaceutical Sciences fourth year student Ursula Fiala, “Erin was supportive, encouraging and patient during the entire rotation which really helped to build my confidence. She also treated me with respect kindness and compassion." Fiala presented the award to Dr. Johnson-Mundo. She adds that while she had the opportunity to learn from many incredible preceptors throughout her rotations, Dr. Johnson-Mundo had the greatest impact, “Erin was the first preceptor of my APPES (Advanced Pharmacy Practice Experiences), during my first hospital rotation. I was extremely nervous and totally thought I was going to suck at the rotation due to my inexperience. On the contrary, Erin formulated a rotation for me which elucidated and amplified aptitudes that I did not even know I had. One example of this was when she assigned me a special project to create a fluoroquinolone guideline. I really did not think the guideline I created was anything special but Erin encouraged me to present it to the Antibiotic Stewardship Committee at Vail Valley Medical Center. Not only was the guideline that I created, under her direction, put into practice at VVMC, it was disseminated nationally to all hospitals participating in the Hospital Engagement Network and to the Colorado Hospital Association Antimicrobial Stewardship Collaborative participants. Erin was over the moon about my success.”

In her presenting speech, Fiala reiterated how much it meant to her that Dr. Johnson-Mundo believed in her and pushed her to succeed, “During my rotation with Erin, I not only learned about clinical aspects of pharmacy such as antibiotic stewardship and ACLS (Advance Cardiovascular Life Support), but I also learned that I can believe in myself, that I can do extraordinary things, just by being me. Erin is a fantastic preceptor who has high expectations of her students but also truly cares about them and wants them to succeed.”