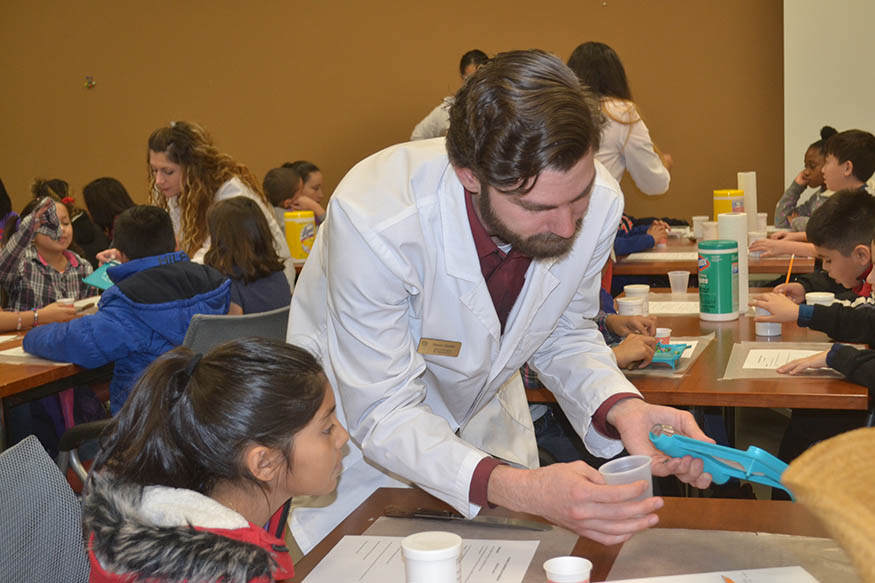 Forty very enthusiastic fourth graders from Montview Elementary in Aurora were participants in the “Pharmacist for the Day” event at the University of Colorado Skaggs School of Pharmacy on January 10. The students were greeted by second year pharmacy student volunteers who seemed to have as much fun as the kids did.  They hosted and assisted the kids with their assigned tasks.  One of the tasks they worked on was compounding or mixing medicines.  The 9 and 10-year-olds were quizzed about measurements and what can happen if medicines aren’t measured correctly, what poisons are and what can happen if you ingest them. They were also shown that it can be difficult to distinguish between medicine and candy and that taking the wrong one could make you quite sick.

Maybe this one day experience will allow the kids to understand a little bit better some of what a pharmacist does on a daily basis and actually have an influence on their way of thinking. They all raised their hands at the end of the session saying they were interested in being a pharmacist….

After the class was over each of the students “graduated” and were allowed to wear their white lab coat attire and posed with their graduation certificates for a class picture. Everyone had a great time and went home with a goody bag as well. They even became local celebrities when they were interviewed by reporter Christina Savan at Aurora 8. She also interviewed second year pharmacy student Dianne Kitt about her experience teaching the students.  All in all, it was a great day for both the elementary school students and pharmacy students. Check out the video now at https://www.auroratv.org/kids_schools/kids_schools.html?show=5290