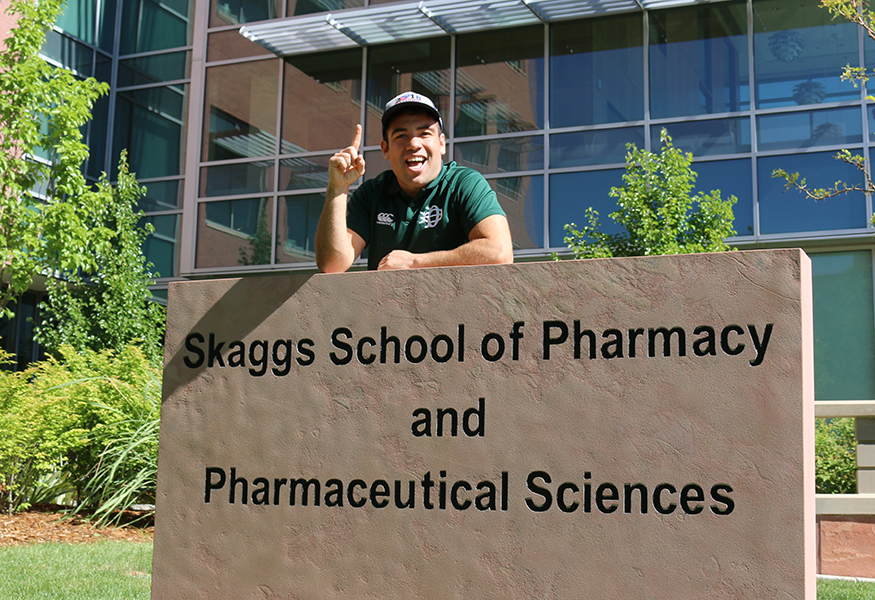 Home News Rugby and Pharmacy - A Winning Combination! back to News

"It's a passion that's made me the person I am today." For Carmine Hernandez, a second-year CU Pharmacy student, that passion is rugby. He's been playing since he was 15 years old, trained for seven months in New Zealand after high school; and his team, the Denver Barbarians, recently won the Men's Division II National Championship, beating the Detroit Tradesmen 39-38! "We won the national championship for rugby fifteens, which is huge. It's a D-2 championship, the end pinnacle that everyone fights for," declared Hernandez. 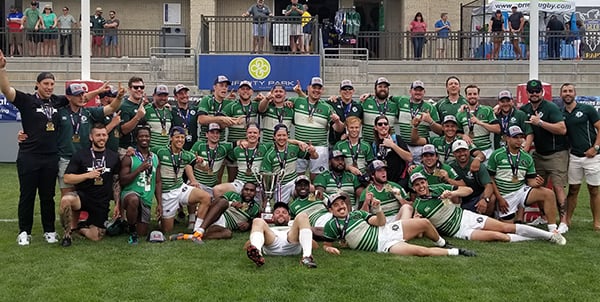 The championship game was a close one with the Barbarians trailing for most of the match, gaining a one-point lead with three minutes left in the 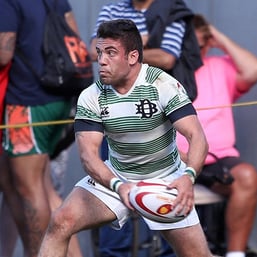 game. Hernandez plays at the scrumhalf position for the rugby team, similar to the quarterback role in American football.

"Scrumhalf is considered the general of the forwards and helps ensure the flow of the offense in close quarters on the field. Organization is key to a successful offense, and my job is to make sure the forwards are structured so that we can be fluid in our attack when moving the ball down the field. Awareness is key when playing scrumhalf because being able to quickly assess all your options and make a decision in a fast-paced situation makes all the difference in breaching the defense. I feel like this is a huge area where clinical pharmacy and rugby coincide because they both require this skill to be proficient," Hernandez explained.

Being in pharmacy school and on a rugby team (almost at a professional level) means Hernandez is certainly busy. With practices multiple times a week for two hours or more at a time, after a long day at school, and also fitting in time for games and homework, he said he's found a way to balance it all, "I couldn't miss Friday classes, sometimes we have quizzes, so I would kind of plan around it. I think one of the biggest things that helped me is just taking it one day at a time. I also like to attribute it to all the support from my mom and my aunt, my friends, teammates, and my girlfriend especially." 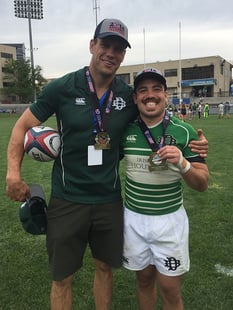 Hernandez is also a pharmacist intern at the Medical Center of Aurora, "I love the clinical setting, helping patients and making a difference, that's what interests me. I like being in the emergency department because you never know what's going to happen, but I also like cardiology. How the heart works is just something that interests me a lot," he related.

Hernandez completed his undergraduate degree at Colorado State University (CSU) and said it was one of his teammates who introduced him to pharmacy, "Going into college, I didn't know what I wanted to do. One of my close friends on the rugby team, he was in biochemistry at the time and noticed that I enjoyed science and he helped me join the Pharmacy Club at CSU. I realized that I liked the complex situations in pharmacy, almost like puzzles, and I wanted a job where I could help improve the lives of others."

Hernandez also credits all the coaches he's had with his success on and off the field, especially the late Rod Hartley, his rugby coach at CSU, "He (Hartley) passed away in May from ALS, and he was one of the most pinnacle coaches at CSU. He helped me grow as a man, helped me with pharmacy school, helped me with rugby and really helped make me into who I am now," remembered Hernandez.

Pro pharmacist or pro rugby player? "Both!" he said, since winning the championship, "My drive and fire is there even more, and I know that'll bleed into pharmacy school because I need them both. If I didn't have the other, I think I'd almost feel kind of lost."