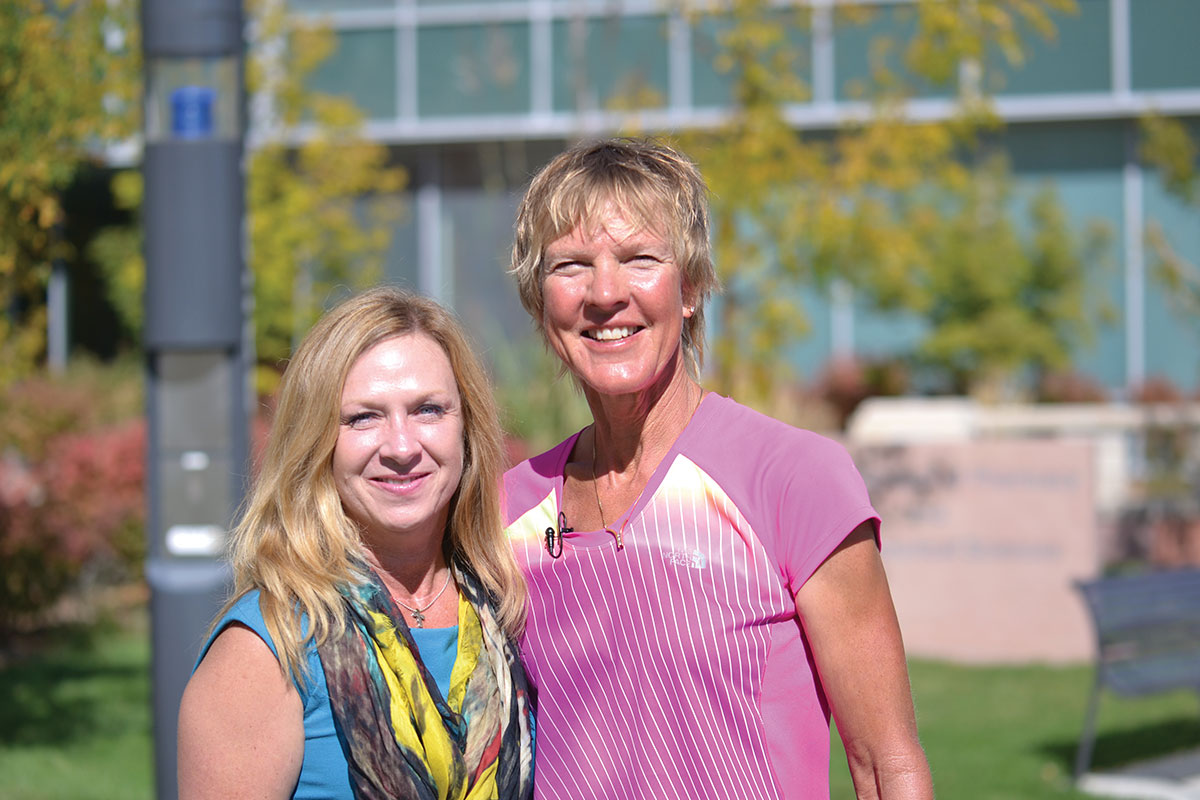 Home / News / Running for her Life

Seventeen years ago, Diane Van Deren underwent brain surgery at University of Colorado Hospital (UCH) to stop epileptic seizures racking her body. A golf-ball sized part of her brain was removed and the seizures stopped. Though the surgery was a success, Van Deren experienced an acute reaction to the medications she was given. She became combative, tried to escape from the hospital and had to be physically restrained. Her reaction caught her physicians off guard.

That’s why pharmacists like Jacci Bainbridge, PharmD and Professor at the University of Colorado Skaggs School of Pharmacy and Pharmaceutical Sciences, are part of UCH’s neurological team.  Medications experts like Dr. Bainbridge are relied upon to limit the potential for adverse drug reactions and “paradoxical events” like the one that affected Van Deren 17 years ago.  Dr. Mark Spitz, head of UCH’s Adult Comprehensive Epilepsy Program and Van Deren’s neurosurgeon says, “Having a pharmacist on  our team is incredibly important when transitioning patients from traumatic brain surgery to recovery.”

While uncommon, these paradoxical events do occur.

Because they are unusual, sometimes they are overlooked or misunderstood. You’ve heard of children who take Benadryl and become hyper, instead of sleepy. That is exactly what happened to Van Deren.  Instead of relieving her pain and making her sleepy, the drugs made her agitated. “The pain was excruciating. It wasn’t just the pain, though. I was going out of my mind. I felt I had to get out of there,” says Van Deren.

Biting, kicking, and screaming --  she was out of control, and completely different from her normal self.

Spitz says,  “Problems like this happen, and with the help of pharmacists like Jacci, this helps to reduce the number of occurrences.

Some medications affect some people very differently than expected and unless you’re a medications expert the medical team may not realize what’s happening or know what to do. “You can make a bad situation worse,” says Bainbridge. ”Some patients like Diane are hypersensitive to medications and can become toxic on very low doses. She didn’t  always tolerate medications to control her seizures – that’s one of the reasons why she was having surgery. We knew from her patient history that medications affected her differently.”

“In Diane’s case the first medication they were going to use to calm her would have had the opposite effect. It would have made her even more agitated and combative. Instead of using a first line drug, they took my advice and used an alternative treatment, which allowed her to relax and become composed,” Bainbridge explains.

As part of the neurological team at UCH, Bainbridge helps manage patients and their medications  -- before, during and after brain surgery. She even enlists patients like Van Deren to help educate pharmacy students who, once they are trained and licensed as doctors of pharmacy, become crucial members of the health care team. Infiltrating EDs and surgical suites, pharmacists provide a vast knowledge of medications and possible interactions. Complications from drug interactions – even while being monitored in the hospital – are one of the most common complications from which patients suffer. In fact, more than 800,000 people in the U.S experienced a serious adverse drug  event in 2013, as reported by the FDA Adverse Events Reporting System (FAERS). (Serious adverse drug events are defined as events resulting in death, hospitalization, disability, congenital anomaly and/or other serious outcomes).

Freed from her seizures, Van Deren who had always been an athlete began to really focus on running. “Prior to the surgery, running helped control the seizures. Whenever I felt a seizure was about to erupt, it didn’t develop if I ran.”  Medications did not always have the same effect.

After the surgery, Van Deren began running for pleasure – no longer to allay the onset of a seizure. A few weeks after surgery, she ran a 50-mile race in Granby and won. So, she decided to try a 100-mile race and has been running ever since.

Today, Van Deren is one of the top endurance athletes in the world and is sponsored by North Face. At 54 years old, she runs 100-mile races in rugged terrain throughout the world. In between races she helps pharmacy students at the Anschutz Medical Campus understand the disease that ran her life for 12 years. She credits Drs. Bainbridge and Spitz for “giving her back her life” when medications and non-pharmaceutical therapies like running couldn’t.