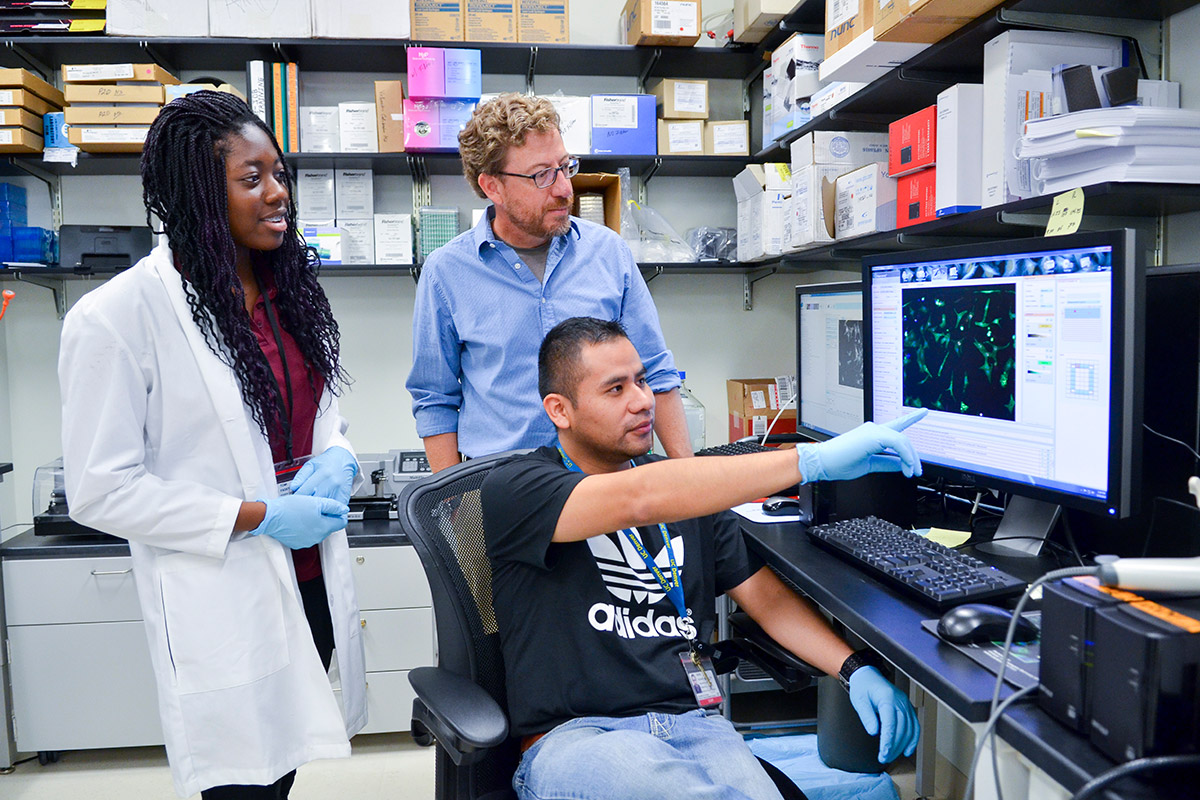 Reprinted from an article in the Aurora Sentinel by Brandon Johansson

Perched on a high lab table at the school of pharmacy sits what looks like a futuristic copy machine with a bright blue light emanating from the middle. The device lets researchers study thousands of compounds at a time that could one day turn into drugs.

On a recent afternoon, Dr. Brian Reid, director of the school’s high-throughput screening core facility, used the device to study various compounds interacting with the heart. The research is part of a collaboration with cardiology researchers aimed at finding drugs to combat a particular form of heart failure.

“Heart failure can be roughly divided into two types.  There are very good drugs for one form, and they’re inexpensive and extend millions of patients’ lives. But for the second type, which represents roughly half of heart failure patients, there really aren’t any good options. We are looking for new therapies for this second type.” Reid said.

That kind of science – partnerships between disciplines to look for medical breakthroughs – is something state officials want to see more of, and research that can one day be marketable enough to create jobs.
Last year, the Colorado Office of Economic Development and International Trade (OEDIT) announced more than $3 million in grants aimed at helping academic researchers and bioscience companies take research from labs like those at our school to market. In the case of researchers at our school, the $410,000 grant is aimed at helping the high throughput/content screening core facility for drug discovery, which more than 100 researchers and companies have used to advance science and help to secure intellectual property, according to OEDIT.

Dr. David Ross, chairman of the department of pharmaceutical sciences in the school of pharmacy, said this particular research is important because it allows scientists to compare thousands of compounds quickly against a specific disease. That leads to the discoveries that can one day become life-saving drugs.

Grants like the one from OEDIT are crucial to making sure those breakthroughs can one day benefit the state, he said.

“If we didn’t capitalize on those, then those opportunities would go out of state,” he said. This provides a way to optimize the resources that you need to capitalize on those innovations within the state of Colorado.”
April Giles, president and CEO of the Colorado BioScience Association, said that from the industry’s perspective, the grants are hugely important because they can bridge the gap between the research lab and the market place.

“This allows them to really look at drug discovery in a way that pharmacies or biosciences companies would utilize in a commercial way,” she said.