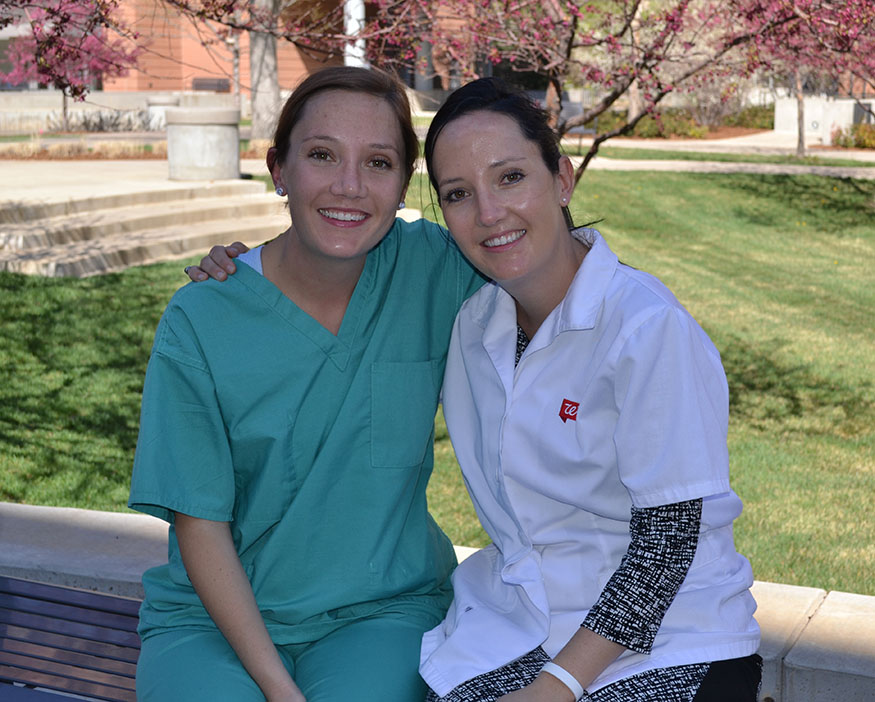 Taylor Alford always knew she had a doppelganger. But few people at the Anschutz Medical Campus knew.

Her identical twin, Naomi Willden, was enrolled in the School of Dental Medicine Doctor of Dental Surgery program while Taylor studied pharmacy. During their three years on campus together, fellow students and faculty would often ask Taylor, "Where's your scrubs? Why did you change your clothes? Why are you wearing a lab coat?"

Few on campus realized that they were actually seeing double. The probability of being an identical twin is 1 in 285. Unusual, but not too remarkable. By those odds, there should be at least seven sets of identical twins on the Anschutz Campus. But add to that the fact that fewer than 2 percent of the U.S. population aged 25+ has studied for a doctorate and the likelihood that students on one campus are related — or an identical twin — is miniscule. This select group is so small that seeing double doesn't even cross fellow students' minds. That's why when students saw the twins in separate settings they just assumed they were the same person.

Raised by a single mother who believed in the importance of education, the sisters pursued professional degrees with a single-minded passion.

Both received undergraduate degrees from CU Boulder. Willden received a BA in Economic Affairs, and then obtained her prerequisites for the dental program from Metro State. Alford received her undergraduate degree in Molecular Cellular & Development Biology (MCDB) from CU Boulder in 2010. After graduation, she embarked on a research career with Gilead Sciences, an American biopharmaceutical company. "It was a natural fit to go into industry. I really liked creating potential drugs. And at that time had no thought of pursuing a pharmacy degree," says Alford.

But after a while on the job, she began to think about the clinical side and how drugs go into humans. She toyed with pursuing a PhD, but ultimately decided on a PharmD, because "Research is a silo. You don't necessarily see the impact of what you are doing. And, potentially a PharmD offers a more secure job market because you can pursue patient care or the research side. There's a lot of opportunity.”

While in pharmacy school, she's still had a hand in research -- originally doing some at National Jewish Health on the mollecular effects of viruses on the lung. She then worked with faculty member Christina Aquilante, PharmD, on her honors thesis investigating the impact of artificial circulation devices (left ventricular assist devices) on patients awaiting heart transplants. In addition to the honors thesis, she has also worked with Dr. Aquilante on some genetics research.

Combining Alford's background in industry with her education in pharmacy has helped her "appreciate the whole process from an idea to a drug to the patient and the end result."

You can be sure that whatever path Alford takes she will have a hand in research. After graduation, she will be doing a PGY-1 residency at Salt Lake City Veterans Administration (VA) where she will be able to practice at the top of her license. According to Alford, "The VA is unique. Pharmacists there have more authority to do things and that appeals to me. There's even the potential for research. The population is underserved, and I'll have the opportunity to make a huge impact.” Alford pursued a residency with gusto. She applied to 12 residency sites; received 11 offers to interview; conducted eight interviews and ultimately matched with her number 1 choice. "Something just clicked. I've never met more friendly or passionate people. This residency really aligned with my strengths,” says Alford.

So, when Alford leaves for her residency in June, the twins will be separated -- something that has happened infrequently throughout their lives. The last time they will officially have been together on campus will be during commencement when Dr. Willden hoods her sister. On that day, fellow graduates and their guests will be in for a treat – they will have the unique opportunity to see double and realize it.