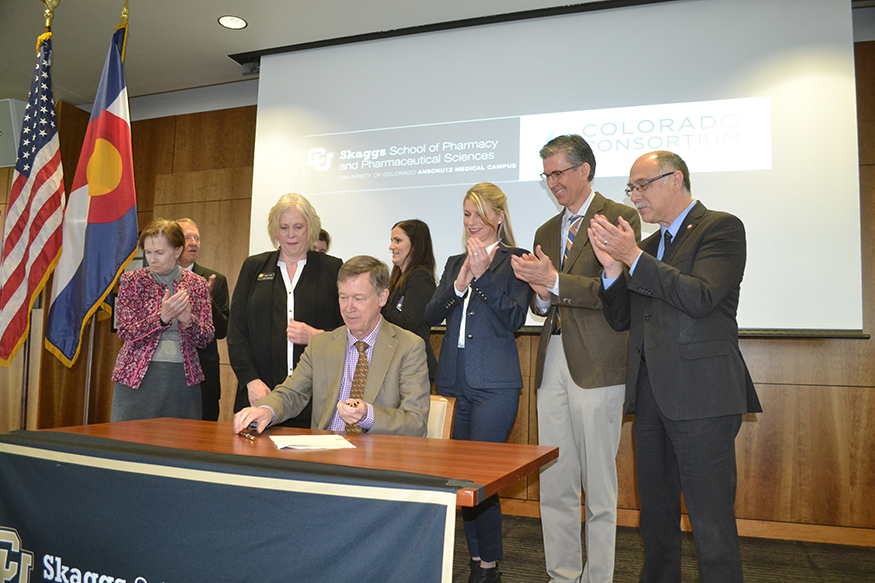 The state of Colorado and the University of Colorado Anschutz Medical Campus are joining forces to fight prescription drug abuse and the opioid epidemic, with the state allocating $1 million to the university to create a new center that will focus on the crisis.

The Center for Substance Abuse Prevention at the CU Skaggs School of Pharmacy and Pharmaceutical Sciences is the result of Senate Bill 17-193, which Gov. John Hickenlooper signed on May 18.

The new center initially will focus on preventing the abuse of prescription medications, including opioid painkillers. Gov. Hickenlooper called the epidemic of opioid misuse an “out of control” problem and noted it affects all Coloradans, whether they live in urban, suburban or rural communities.

“This is a major step forward,” Gov. Hickenlooper said. “This center will be able to, with a great sense of urgency, come up with not just research but also options and plans to make real headway.”

The center’s role will include helping state agencies, communities and nonprofits (among others) develop, improve and coordinate public outreach and education campaigns throughout the state.

The $1 million for the center comes from the marijuana tax cash fund.

Lawmakers and university leaders including CU Anschutz Chancellor Don Elliman joined the governor at a bill signing ceremony at the school. Elliman noted that the center deepens the relationship between CU Anschutz and the state, which have a mutual interest in fighting the opioid epidemic.

“It’s a project that’s been a priority on this campus and for our governor for more than four years,” Elliman said. “The new center will be a welcome tool. It’s work that we believe passionately in.”

The new center will build on the work of the Colorado Consortium for Prescription Drug Abuse Prevention, which is headquartered at the CU Skaggs School of Pharmacy and Pharmaceutical Sciences and is coordinated by Consortium Director Robert Valuck, Ph.D., a professor at the school.

The consortium provides infrastructure and coordination that links the many agencies, organizations, health professions, associations, task forces and programs that are currently addressing the prescription drug abuse problem. Its efforts include the Take Meds Seriously campaign, which educates Coloradans about the importance of safe use and safe storage of prescription drugs.

The consortium also works with the Colorado Department of Public Health and Environment on the Take Meds Back campaign, which helps Colorado residents find options for safe disposal of medications. It also helps pharmacies and law enforcement agencies begin drug take back programs.

The $1 million will go to prevention, education and research. The initial focus will be on the abuse of opioid painkillers such as hydrocodone, oxycodone and fentanyl. Over time, the center will be positioned to expand its work to include other substance abuse issues, including alcoholism and the abuse of other prescription drugs and illicit substances.

Both Hickenlooper and Elliman said they believe the Center for Substance Abuse Prevention will be able to build on the state’s initial investment to grow into one of the nation’s most effective centers. Hickenlooper pointed to CU Anschutz’s successful track record of leveraging public money to raise private donations. Elliman said the center will forge relationships with organizations and communities throughout the state.