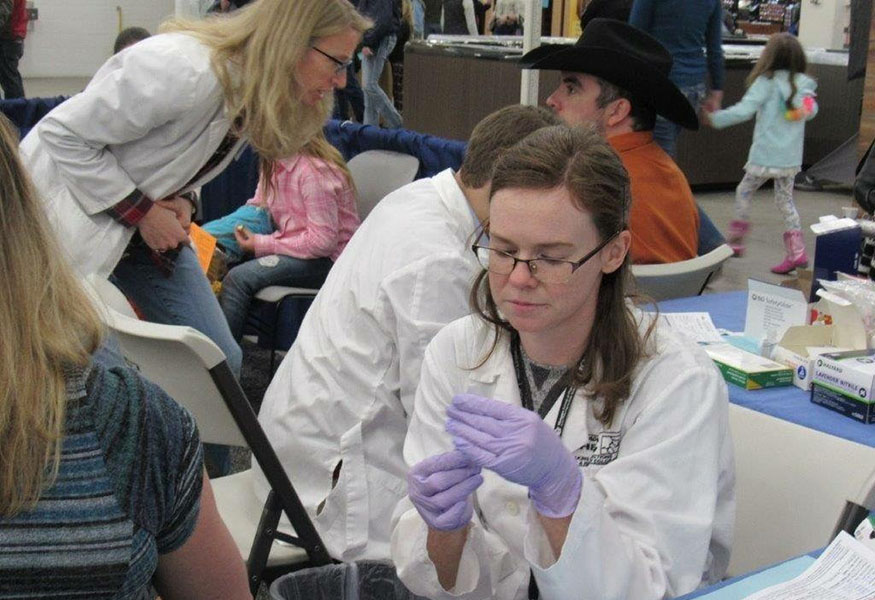 Home News Student Postscript from the Stock Show back to News

"Volunteering for the AHEC health screening booth at the National Western Stock Show has become one of my favorite volunteer opportunities thus far. I first volunteered last year as a first-year pharmacy student. As a first-year student, I jumped at the chance to have more direct patient care experiences and was excited to do so in such a fun environment like the stock show. This opportunity was more rewarding than I had hoped, and I volunteered again to participate in this year’s stock show. This year I not only was able to complete health screenings, but I also helped coordinate and administer donated flu vaccines.

Bringing resources directly to patients, such as free health screenings and free flu shots, helped reach a patient population that is often left underserved. I could not count the number of patients I spoke with that do not have a relationship with a primary care physician in their community or don’t see a doctor on a regular basis. Providing resources in a relaxed environment in which they are comfortable, helps us build rapport and create that first link with the healthcare system.

There was one encounter that really resonated with me. Last year we had a patient from a rural area, with no connection to the healthcare system, agree to a health screening. It was found during his health screening that his blood sugar level was extremely high. This was something he had no prior knowledge of. Through resources provided by AHEC, he became established with a PCP at home and began to control his diabetes. He came back to the booth this year to thank us for the help we provided him. Without that health screen last year, who knows how long he would have continued to be undiagnosed. It is patient encounters such as this one that will stick with me. I look forward to volunteering again next year as we continue to make an impact in our community."
- Devin Rose, P2 pharmacy student

Pharmacy students along with other health professions students across the Anschutz Medical Campus have been giving flu shots at the National Western Stock Show and Rodeo since 2008. The flu shot effort is part of AHEC's health screening booth and the flu vaccine doses were donated by King Soopers and Walgreens.