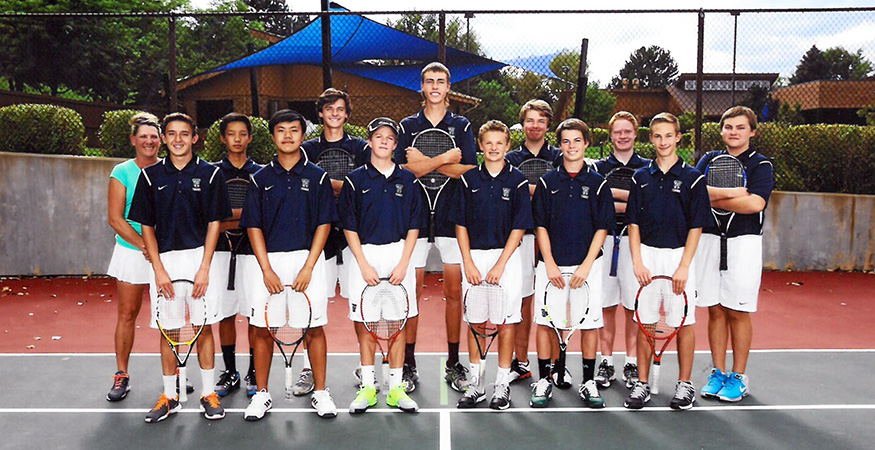 I bet you didn’t know that in Program Assistant Patty Meyer’s spare time she coaches Thunder Ridge High School Boys Junior Varsity tennis team. Comprised of 12 teenage boys, three of whom had never held a tennis racket before, the team was in need of a patient leader and teacher. And Meyer fit the bill.

After years of competitive racquetball and tennis and coaching her children through high school and college, Meyer decided to give team coaching a whirl. “It was really rewarding. Especially coaching those who had never played before. The looks on their faces when they mastered skills was priceless.”

Meyer and her late husband passed on their love of the sport to their children who played for Aurora’s Grandview High School and more than a decade post-graduation still hold all the school’s records. Both sons played in college – the youngest received a full-ride scholarship, the eldest was a “walk on” his sophomore year and made the team. Their love of the game parlayed into full-time positions as teaching tennis professionals. Her eldest also as the Thunder Ridge Boys Varsity coach. And it’s through her son that she became a coach.

One day last year, he called his mother in a panic and said, “Mom, I’m desperate.” The call was in response to an injury sustained by the JV coach, which would sideline the coach for the season. With no JV coach, Thunder Ridge was in a bind.  So, the call went out to Meyer who subsequently rearranged her schedule to accommodate 3 p.m. practices and game days.  “Coaching is something I always wanted to do.” Under Meyer’s tutelage, the team did pretty well with a 7-3 (win-loss) record.

With one coaching season under her belt, Meyer is hooked and is looking for coaching gigs closer to work and home. Her dream position would be at Grandview High School where her sons played.