When Aleta Yushkevich was still in high school, she knew which career path she wanted to take — and exactly where she wanted to go to school — not only for her undergraduate education, but also for a health profession education.

A native of Denver, she spent four years as a CU Boulder student preparing to enroll at the CU Skaggs School of Pharmacy and Pharmaceutical Sciences. With a biochemistry degree in hand, Yushkevich will move forward with her goal and join CU Pharmacy’s newest group of students, the Class of 2024, this fall. She was so prepared to come to CU Pharmacy that she chose the school’s early decision application process last summer that assured her spot in the class almost a year ahead of time.

“I chose the CU Skaggs School of Pharmacy because it’s always been somewhere I’ve wanted to go,” she said.

So how did she come to her decision so early? 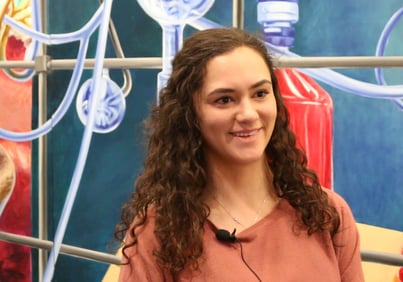 That’s where CU Pharmacy’s Outreach and Engagement team comes in.

The team, which works with high school and college students to explore careers in pharmacy, offers advising and outreach for students across the country.

An important part of their engagement involves working with students who are members of HOSA – Future Health Professionals, a primarily high school-level organization for individuals who are interested in health careers.

The Outreach and Engagement team is largely responsible for spearheading the development of the national Pharmacy Science Competitive Event, the first pharmacy-focused competitive event among many offered by HOSA.

The team has always interacted with thousands of HOSA students on a local and national scale annually, shedding light on the wide variety of pharmacy career options available to students, from hospital settings to community pharmacies to drug information offices and beyond.  However, the process of developing the Pharmacy Science Competitive Event has allowed them to engage even further with young people who have chosen pharmacy as their future career.

Yushkevich’s early focus on pharmacy and her membership in HOSA spurred her to participate in the first pilot of the Pharmacy Science Competitive Event. Originally, the event was offered only in Colorado. As the Outreach and Engagement team navigated the procedure to test the event at a local level, the goal was to petition for its incorporation at the national level. As a result, Yushkevich holds the honor being among the first students to place in the competition in the first ever occurrence of the event.

Early successes were bolstered by students like Yushkevich who were willing to participate in the pilots. This ultimately lead to the first offering of the officially sanctioned Pharmacy Science Competitive event at the 2019 HOSA International Leadership Conference in Orlando, Florida, with nearly 100 student participants from across the county.

Prior to deciding on pharmacy, Yushkevich had a general idea that she wanted to enter the medical field. But her interactions with the outreach team ultimately cemented her passion for pharmacy.

“They really helped guide me to make the decision to come to pharmacy school,” she said. “They also really motivated me and inspired me to want to pursue this career.”

While a student at CU Boulder, she got even more engaged with CU Pharmacy.

As a college junior, Yushkevich participated in CU Pharmacy’s PharmD To Be program, which is currently undergoing significant structural changes to increase access and flexibility. Its goal is to help students explore the profession of pharmacy and enhancing their application to CU Pharmacy through a variety of activities, including unique shadowing and learning experiences at the CU Anschutz Medical Campus.

“I was on campus about once a month for nine months, so I got to experience a lot of the campus life, and meet with some of the students and the faculty, and better understand what CU Pharmacy is about,” she said.  “It was a really good experience to help me want to choose to come to this school.”

This allowed her to interact with other like-minded undergraduate students who were interested in pharmacy, as well as current CU Pharmacy students who work there to complete rotations — a major part of the school’s curriculum.

“I think most college students do keep up with a job while they’re in school, but it’s very rare for a college student to have a job in exactly what they want to do,” she said. “So being able to have that experience was amazing.”

Dr. Catherine Jarvis, PharmD, the Associate Dean for Undergraduate Engagement and leader of the Outreach and Engagement team, said it has been a pleasure to work with Yushkevich.

“She has accomplished so much through her amazing hard work and determination, but she also realized huge benefits by identifying a career early, which allowed her to access many opportunities to set herself up for tremendous success,” she said. “Her energy, positivity and enthusiasm are infectious and the bonds she formed with other PharmD To Be students, many of whom are also entering pharmacy school this fall, will last a lifetime. CU Pharmacy couldn’t be more proud to have her as a new student at our school and a future member of the pharmacy profession.”

Now, Yushkevich will take her experience and pursue a dream she’s had since high school. She said multiple experiences along the way influenced her decision to attend pharmacy school.

Watch this video to learn more about Aleta's journey: