Nimisha Mallela’s path as an artist has been on an upward trajectory ever since she started drawing at age seven. By 10, she completed some of her first full art pieces, and at 15, she began entering competitions. Her work has been published in student magazines and she even recently received first place in the Cherry Creek High School art competition with a painting of her grandmother.

So when her dad, University of Colorado Skaggs School of Pharmacy and Pharmaceutical Sciences Associate Professor Krishna Mallela, PhD, asked her if she could create artwork to be published alongside pioneering muscular dystrophy research from his lab on the CU Anschutz Medical Campus, she was up to the task.

By the end of the collaboration, Nimisha, who recently graduated from Cherry Creek High School, had a major new piece to add to her portfolio: her artwork was published on the cover of the ACS Omega Journal. 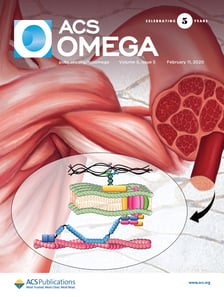 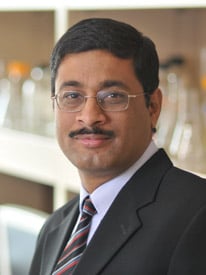 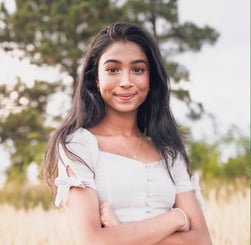 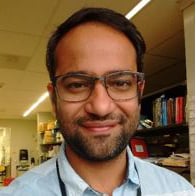 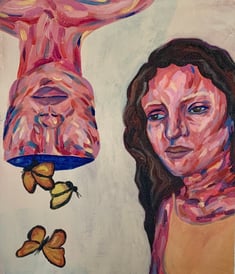 A piece of artwork by Nimisha Mallela, "Duality of Mind"

“I had never done scientific art before, so it was kind of new and fun,” she said. “I took him up on the opportunity and I had a lot of fun doing it and it was successful.”

Her first task in creating the art was this: “figure out what the article was about,” she said. “Obviously, I didn’t know a lot about muscular dystrophy because I was still in high school and I hadn’t learned about it.”

As Nimisha would learn, the article represents groundbreaking research in understanding the role of the protein dystrophin in Duchenne Muscular Dystrophy (DMD).

DMD is a debilitating genetic muscular disease found mostly in boys and is characterized by progressive muscle degeneration and weakness. Most DMD patients are restricted to wheelchairs by age 11, and many die before they enter their 20s, either as a result of cardiac or respiratory failure.

Even though the disease was first described by French neurologist Guillaume Benjamin Amand Duchenne in the 1860s, no cure has been discovered.

But researchers in Mallela’s lab, including Postdoctoral Fellow Vaibhav Upadhyay, PhD, are uncovering how the molecule functions in different tissues — and the symptoms it causes when it doesn’t function properly in these tissues. Once scientists have a complete understanding of the molecule, Mallela said, they can begin developing drugs and therapies to cure the disease.

“This is just a small part of the puzzle, but what we’re trying to show is that what happens on the outside is not the only thing which happens in this disease,” Upadhyay said. “There are other things which are happening.”

Mallela’s lab represents a rare group of researchers who are studying the protein on a molecular level.

“Not much was known about the physical principles that control the function of this protein before we started this work in our lab, basically,” Mallela said. “We need to know how this protein functions on a molecular level so that we can develop the therapies based on understanding the symptoms.”

When dystrophin was first discovered, scientists thought it is only present in skeletal muscles. But in recent years, researchers have found that the protein also exists in the brain and heart — and everywhere else in the body.

“So now we need to understand what this protein is doing in all of these different tissues,” Mallela said.

That’s where their recent research comes in.

Typically, dystrophin provides stability and helps muscles handle stress. But when the protein doesn’t function properly, the cells are not able to take the pressure and they collapse. For patients, this results in muscle loss.

In the paper, the researchers look at how the protein functions in different tissues — does dystrophin function differently in heart or brain than in skeletal muscles? In answering this question, their goal is discovering how those different functions can lead to a greater understanding of DMD, and eventually, a cure.

Upadhyay said he hopes their work can encourage the research community to focus on the molecular understanding of the protein.

“We are trying to divert the engine of the research from muscle specific functions of dystrophin to functions it performs in the heart, brain and other tissues.” he said. “This is just in its infancy and I hope with this paper, we can divert the attention of the research community toward this problem.”

What’s one way to bring attention to their research? Accurate and compelling artwork.

Mallela said it's important to strike a balance between art and science.

“Maintaining the accuracy of science and creating the art — that’s the most difficult part,” he said. “Textbooks are always trying to find these artists who understand the science as well as the art. That’s always the difficult task.”

For Upadhyay, it’s also a chance to bring attention to the research.

“It’s also important for outreach,” Upadhyay said. “If you have a very attractive visual, it can reach out to many people. Even non-scientists and people who are not from the same background — they can show interest as well.”

When Nimisha began creating the journal artwork, she wanted to strike a balance between maintaining scientific accuracy and adding her own artistic touch.

Once the journal was published, Nimisha learned about new potential career paths, including medical illustrator positions. Now that she has graduated from high school, Nimisha is on her way to CU Boulder, where she plans to major in biology and minor in art.

No word yet of additional collaborations between the two, but if Nimisha and Mallela’s respective track records are any indication of the future, we will expect to see more innovative work from this father-daughter duo.