"Look! Up in the sky! It’s a bird! It’s a plane”. . .No, it’s a pharmacist. Class of ‘68 alumnus, Rod Palmieri, is no stranger to facing challenges. So, when the chance to volunteer for the Jackson County Oregon, Sheriff’s Search and Rescue Team (SAR) presented itself, he jumped at the opportunity. Really ... he did jump.

As the only pharmacist on the Team, Rod’s skills serve as an asset when dealing with situations requiring some form of medical attention. According to Palmieri, the Sheriff is mandated by the State of Oregon to have a search and rescue team. His Team receives a call about every other day and responds to missions for lost children, adults, or people stranded or injured in inaccessible areas. During a two-week period, this summer, they have had 3 missions to rescue stranded people inside the caldera at Crater Lake National Park. This summer, his team set a State of Oregon record for the number of SAR missions within a two-week period. 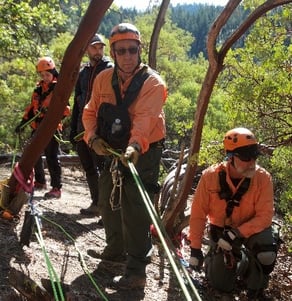 Palmieri (center) prepares to make his way down a mountain slope. 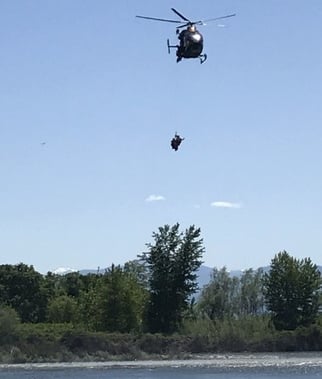 Rescuer rappels from helicopter to location of lost person. 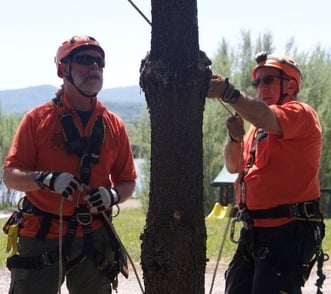 Palmieri secures a rope for rappelling. 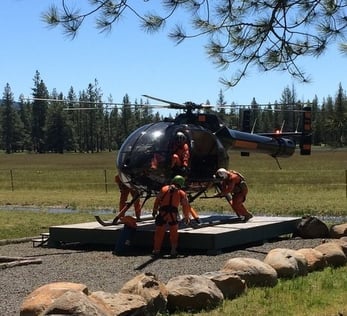 Rescue team prepares to board helicopter from port.

The Sheriff’s Department, in addition to the SAR Team, has numerous specialty teams to perform special functions in difficult situations. One of these is the Medical Team. “I joined the Medical Team, because I was asked to provide knowledge on medications needed during a rescue,” Rod said. “In addition, I have received extensive training as a Wilderness First Responder and am available for every mission that needs medical assistance. I am also a member of the following Specialty Teams: System Support Team, Technical Rope Rescue Team for high and low angle rescues, ATV Team and the Large Animal Rescue Team.”

It shouldn’t surprise anyone that Rod would be a part of such an effort. He has a history of recognizing a need and taking steps to create a resolution. This was his approach years ago when he identified the need to improve medical record tracking for the State of California. Before there were widespread computers and technology to track such records, Rod identified a means to maintain accurate records for the State. His efforts were recognized as so incredibly compelling that it led to California creating a section specifically for tracking medical and pharmaceutical records. This system went on to be adopted by the Federal Government for national implementation.

One might say Palmieri’s natural impulse to jump in where needed is what led him to a career in pharmacy. He wanted to be a pharmacist from an early age. When the time came, he went to 2 years of college in his home state of California. A good friend, also a pharmacist, convinced Rod to apply to the University of Colorado, then in Boulder. “I decided to enroll because there were no oceans to distract me,” he said. Palmieri also found the University of Colorado highly rated and the class size appealing.

While at CU Boulder, he was presented with the opportunity to fill a chair at University of Colorado Medical School in Denver to become an MD. He recognized, after much thought, that pharmacy was the career path best suited for him and he continued with the pharmacy curriculum.

Palmieri remembered the personal attention afforded students and described an occasion where he missed a physical pharmacy exam and needed to reschedule to take the exam. The professor, Dr. Tony Jones, allowed Palmieri to the take the exam as an oral presentation. That was the most exciting exam he ever took.

Although his main interest was in research, (he was published 3 times while still a student) Palmieri discovered that most pharmacy research positions were in the Midwest. But, being from California, he wished to return, and accepted a position working as a consulting pharmacist for California State Medicaid. It was there where a real need surfaced. Pharmacists were voicing concerns that competitors were billing for drugs that were not approved for dispensing under the Medicaid Program. In response, Palmieri developed the Drug Utilization Review Pharmacy Program for the State of California, the first of its kind in the United States. With a staff of 10 pharmacists, his team monitored and prosecuted fraudulent pharmacy practices throughout California.

Palmieri also developed a passion for working with vital records and, as a result, was appointed as the Chief of the Office of Vital Records for the State of California. During his tenure, he and his team automated the process of maintaining vital records by computer. This protocol proved so effective that it was adopted by the Federal Government who provided funding for Palmieri to develop it into a national model. This eventually led to Palmieri’s involvement in developing a law to fund vital records, making it an autonomous and self-funded operation with an annual budget of up to $18 million.

This process expanded to 99.9% of electronic records from birth to death. It was the first of its kind in the United States and it prompted other states to follow suit once it became the federal model. All this with a Pharmacy Degree from the University of Colorado!

Palmieri saw the connection between vital records and pharmacy. “There was always a pharmaceutical perspective because pharmaceuticals played a large part in everyday life,” he observed.

Another example that a pharmacy degree leads to interesting and important work, was his work with pre-natal quality of care in determining how drugs interacted with the development of the fetus. This work led to increased fetal survivability.

Further opportunities surfaced for Palmieri when a privately funded group approached him about developing a program to assure that emergency responders deploying to disasters had proper medications and dosages for each member of the responder team. His work in this area proved invaluable to those in the field.

Rounding out his experience, he was able to take his skills abroad when he went to Guatemala to help with staffing a clinic in a rural community. In one week, the clinic saw over 4000 patients and filled over 10,000 prescriptions – all in Spanish. He references the Guatemala clinic as another one of the highlights of his pharmacy career because the residents were so grateful to be able to receive medical care. It afforded him the opportunity to educate the residents in taking an active role in addressing their medical needs by showing them how to do such things as draw syringes and properly administer medication to children.

Palmieri credits pharmacy with making his life interesting and encourages students to also look for interesting ways to utilize a career in pharmacy to make an impact. “Pharmacy is a fantastic career. I would encourage students to use pharmacy to find ways to make their lives more fulfilling and to improve the world we all live in. Get involved and expand your horizons!” Palmieri advised.

P.S. Rod Palmieri is currently an active member of SAR at the age of 76, and he is still having fun.