Home News CU in Peru back to News

Michael Carpenter’s experience at CU’s School of Pharmacy has been vastly different than most. As part of CU Peru, Carpenter has gained a unique global experience unlike any other.

CU Peru, an interdisciplinary organization made up of students from a variety of University of Colorado schools, seeks to support local Peruvian communities by helping them with both educational training and triaging assistance. It’s an initiative Carpenter says that ultimately led to his decision to attend CU’s Skaggs School of Pharmacy.

“I thought it was really great to be able to work with so many different kinds of people from so many different disciplines,” said Carpenter.  “And I wanted to travel and continue to improve upon my Spanish and serve underserved populations.” 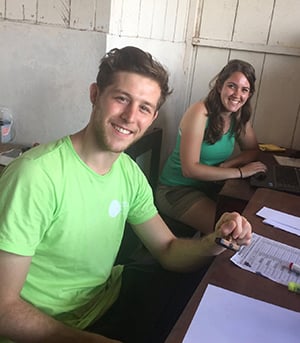 CU Peru students team up with Community Agents of Health, or Peruvian volunteer workers who were elected by their village to serve as the town’s healthcare official.

“They are usually people who have no official training in towns where health posts and officials are hours away by boat,” said Carpenter. “Often, the volunteers will have to bring a test by boat to the health post, and then go back days later to get the lab results.”

Carpenter, along with Allison Maytag, who is receiving her master's in public health, have been working to solve this problem and recently received a small grant from Poverty Hack.  It’s a competition they had applied to that focuses entirely on solving problems of global poverty. Their idea? To develop an app where community volunteers are able to send texts directly to the health posts via 2G cell networks.

“The app would allow the Community Agents of Health to text the health post tech, and if they’re not available, the message would be automatically forwarded to the next health post, so the Community Agents of Health would know which health post was currently staffed before making their journey,” he said. “The app would also allow the tech to send back lab results from tests, cutting the volunteers’ journeys in half.

As rewarding as the experience is, Carpenter says it hasn’t been easy.

“I learned a lot about education and changing people’s behaviors and how difficult of a task that is – working with a culture so far removed from what you’re used to,” he said. “You’re about as smart as a six-year-old in their society.”

As the current CEO of CU Peru, Carpenter says the experience has also allowed him the opportunity to learn the ins and outs of running an organization.

“You have to pay taxes and find ways to keep members happy when you’re running a fully functioning nonprofit,” he said. “I understand a lot more now about where leadership is coming from.”

Following graduation, Carpenter hopes to snag a job in a Spanish-speaking clinic, helping serve undocumented immigrants, in addition to serving as a CU Peru alumnus.