In a night of recognition and remembrance, more than 40 University of Colorado Skaggs School of Pharmacy and Pharmaceutical Sciences students took home awards and scholarships during the school’s annual Awards Convocation event.

One new scholarship was created in honor of Erin Terrio, a dedicated student who died in 2016 from complications of cystic fibrosis, a disease she battled her entire life. Terrio was recognized for her determination to complete her studies at the end of the fall 2016 semester before she passed away, and is set to receive a posthumous degree at CU Pharmacy’s commencement ceremony May 24. The Erin Terrio Memorial Scholarship was awarded to Elizabeth Ko.

The Glenn D. and Jennifer M. Appelt Scholarship, awarded to student Chelsea Vallejos, was created in memory of former CU Pharmacy professor Glenn Appelt, who spent a 30 years with the school and is remembered for his kindness and dedication to research and teaching.

The C. David Elm Scholarship is named after the former longtime CU Apothecary manager and goes to an active or honorably discharged member of the U.S. Armed Forces or a dependent of one. In his time with CU, Dr. Elm mentored more than 1,000 students. Dr. Elm attended the awards convocation to present the scholarship to student Dario Martinez. 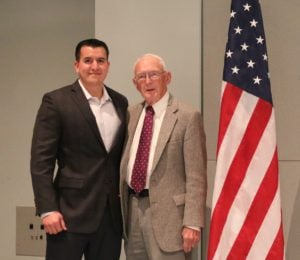 The ceremony was also a chance to honor two generous CU Pharmacy donors who recently passed away: Peggy Holden and Eugene McMahan.

Holden, who died in February, graduated from the School of Pharmacy in 1946 and, years later, started an endowment to support the Peggy and Jack Holden Scholarship. This year, the award went to Melanie Jakobs.

McMahan, who donated an in-state tuition scholarship in memory of his daughter for 25 consecutive years, also died in February. Every year, McMahan delivered the same speech to the crowd, recognizing his daughter, who graduated from the School of Pharmacy in 1976 and died after a battle with Lupus in 1993. This year, Dean Ralph Altiere shared McMahan’s words with the audience one last time.

The recipient of the Teresa McMahan-Shulkin Memorial Scholarship this year was Danielle Lucero.

See a list of this year’s awardees and scholarship recipients below. 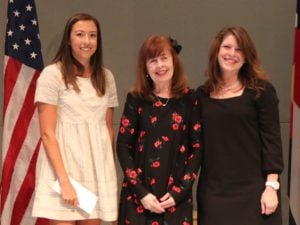 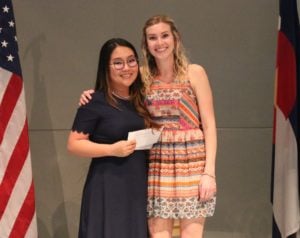 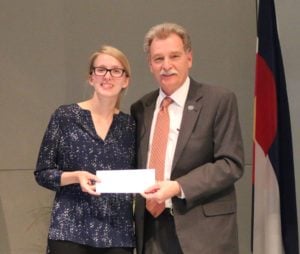