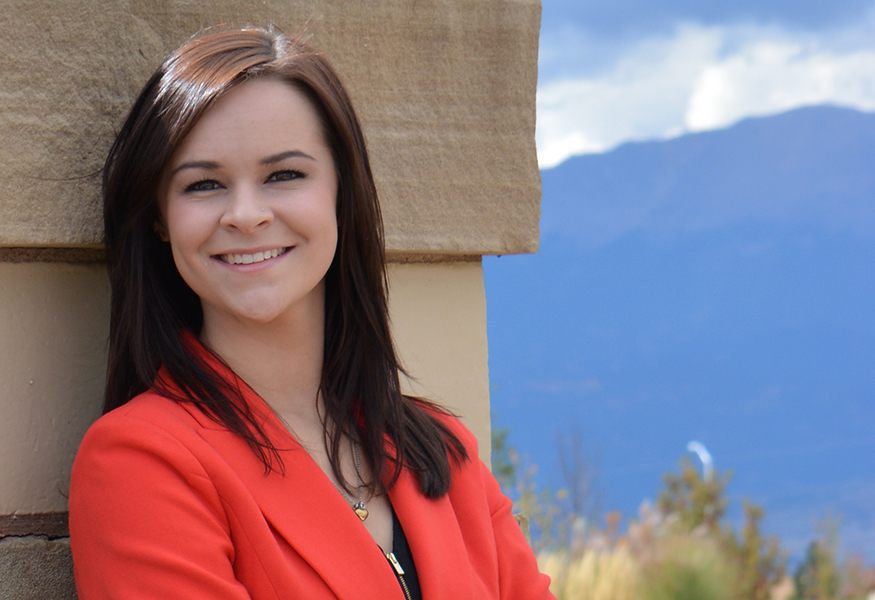 Rachel Visage is a P4 with a passion for pediatric pharmacy.

With a strong interest in science and the medical field, the Colorado native enrolled at Colorado State University and – thanks to an advisor – became a member of CSU’s Pre-Pharmacy Club. It was there she would meet Monica Evans, a CU Skaggs School of Pharmacy and Pharmaceutical Sciences alumna who was completing a PGY1 residency at Poudre Valley Hospital.

“Monica came and talked about her residency at PVH and the different types of rotations you can have in hospital pharmacy,” said Visage. “That’s where I heard about her pediatric rotation and that you could specialize in pediatrics. I had always wanted a career that could help benefit children, but I also wanted to work in healthcare and pursue the pharmacy route. That’s when I realized pediatric pharmacy was exactly what I wanted to do.”

After three years of undergraduate work in chemistry at CSU, Visage was accepted into CU’s School of Pharmacy and received her Bachelor of Science in Medical Science after her first year of pharmacy school. The program allows students who do not have a bachelor’s degree the opportunity to complete their first year of pharmacy school while also earning credit towards a bachelor’s degree awarded through the school.

“Amongst the handful of schools I was applying to, CU was on a campus with two teaching hospitals – Children’s and UCH,” said Visage. “When I spoke with Monica about pharmacy school, one thing that stuck out in my head was that she said when she gets students on rotations, CU students stand out and excel above the rest. She said everybody can get a pharmacy education – you can go to pharmacy school and get the same education, but the way that CU prepares students professionally sets this school apart.”

Recently, Visage was awarded the Pediatric Pharmacy Association’s John Dice Memorial Student Scholarship, given to students who are interested in pursuing a career in pediatric pharmacy and have demonstrated a dedication to the practice – both of which fit Visage to a tee. Only two students in the nation receive this award each year, which Visage considers to be a true honor.

Through her work as one of the founding members of CU-PediatRx, a student organization designed for students seeking a career in pediatric pharmacy, and her role as an intern at the No. 5 nationally ranked Children’s Hospital Colorado, Visage has learned a lot. Most recently, she has completed a clinical rotation at Children’s Hospital in oncology and bone marrow transplant.

“I can see from start to finish how the pharmacist plays a huge role in managing the medication regimen from chemotherapy to a lot of the supportive care medications,” said Visage. “These kids often have up to 50 medications on their profile, so seeing the complexity of care and seeing the pharmacist’s role in that is pretty amazing.”

It’s a role, she says, that takes a special kind of person.

“From what I’ve learned from working with the people over at Children’s Hospital, it takes a really special kind of person to be able to find the reward in the positive outcomes, but not necessarily get set back by the negative outcomes that can sometimes happen. It’s very rewarding to work with these kids, and to have a job that can have a positive impact on children.”