Ashton Villars has always been a problem solver. As a competitive athlete in basketball, waterskiing, and tennis and an actual rocket scientist, Villars has tackled every challenge in life head on — including his prostate cancer diagnosis. Now, he’s bringing that same problem-solving spirit to supporting cancer research. 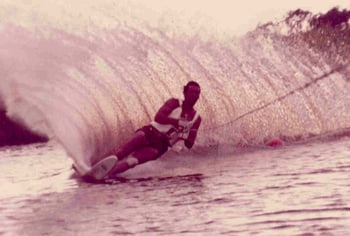 Even as a child, the New Orleans native knew he was going to be an engineer. After earning a bachelor's degree in mechanical engineering and a master’s in nuclear engineering from Louisiana State University, Villars worked for Boeing on the Apollo project and was on-site at NASA’s Michoud Assembly Facility on the day of the first moon landing in 1969. After that, he went back to LSU to finish his master’s thesis, then moved to Denver in the early 1970s to look for work. He eventually took a job in the research department at aerospace company Martin Marietta.

“It was hard leaving New Orleans, especially because of the food,” Villars jokes. “I try and go back once a year to partake of that. Even though it's not healthy, it sure tastes good!”

Doing his own research

In late 2007, Villars’ prostate-specific antigen (PSA) levels began to escalate. Elevated PSA levels can signal a number of prostate issues, including cancer. A biopsy in January 2008 confirmed that Villars had prostate cancer and that it was likely metastatic.

Although he was initially in a state of shock, Villars’ training as a scientist quickly kicked in. His urologist recommended that he get surgery immediately, but Villars, who didn’t know much about prostate cancer, wanted time to do his own research.

“Like everybody who is faced with terminal cancer, I didn’t sleep that first night,” Villars says. “But before the morning came, that all changed, and I became the engineer again.”

Instead of surgery, Villars sought out a second opinion from Brian Kavanagh, MD, a radiation oncologist at University of Colorado (CU) Cancer Center and chair of the division of radiation oncology. Together, they decided that Villars would go on hormone therapy to slow the cancer and give Villars time to decide how he wanted to approach his treatment.

Since then, Villars has visited clinics across the country, where he has undergone countless imaging scans and blood tests and numerous treatments, including both internal and external radiation, different types of hormone therapy, and surgery to address a tumor that had developed near one of his kidneys.

A clinical trial brought Villars back to the CU Cancer Center in 2017 and introduced him to his current doctor, Elizabeth Kessler, MD. Kessler is a medical oncologist and CU Cancer Center member specializing in genitourinary cancers (prostate, bladder, testicular, and kidney cancers).

“I adore Dr. Kessler,” Villars says. “like many of the doctors at UCHealth University of Colorado Hospital, she’s amazing, selfless, and tireless. And she’s put up with me quizzing her every time we talk about the next step. Because at this point, I don't do anything without researching it.”

The feeling is mutual, according to Kessler.

“Ashton’s case is an example of how the doctor and patient really are a team, as he is always bringing new thoughts, perspectives, and questions about prostate cancer to really keep me on my toes,” Kessler says. “This is one of the best parts of our work — when we can work together with patients and stay on the cutting edge.”

It was a tour of Kessler’s research lab in early 2019 — along with a presentation about CAR T-cell therapy by Terry Fry, MD, the CU School of Medicine’s director of cancer immunotherapy and CU Cancer Center member — that inspired Villars to begin donating to the university.

“I donate because I want to help other patients as much as I possibly can. And, if my donations help, it's a win-win for me, because I'm searching for a treatment that will extend my lifespan and my quality of life. So I'm also doing it for myself.”

In addition to annual gifts, Villars will leave a legacy by giving a gift of real estate and has designated CU as a beneficiary of his retirement account to support prostate cancer research and CAR T-cell immunotherapy research within the CU Cancer Center.

He has also given gifts to support the CU Anschutz Fund for Excellence, which provides flexible funding to address CU Anschutz’s most promising priorities in support of research, education, and patient care.

“I feel like giving to University of Colorado Cancer Center is such a useful thing to do, because I know it will go to doing something to really help cancer patients and the research world,” Villars says.

“Plus, I’ve always had a soft spot for UCHealth and the University of Colorado,” he adds. “Except for the times they played LSU in football!”

Villars hopes his donations will help researchers achieve a breakthrough in immunotherapy for prostate cancer patients. In the meantime, he is still fighting his own battle against cancer, and, of course, doing his own research every step of the way.

“Engineers, scientists, and doctors — we're all problem solvers, and I think that’s really helped me in fighting cancer,” Villars says.