The prostate-specific antigen (PSA) is a protein produced by the prostate gland. The PSA test is a blood test used to measure the amount of this protein found in the blood. Results are reported (ng/mL), which means nanograms of PSA per milliliter of blood. High levels of PSA have been found in men with advanced prostate cancer.

“The PSA screening test helps to detect abnormalities in the blood that may indicate further testing is needed,” explains Paul Maroni, MD,  associate professor of surgical urology at the CU Cancer Center. “However, patients need to keep in mind that a PSA test is not diagnostic and does not indicate whether someone does or does not have cancer. Think of the PSA test as a forensic tool that leads detectives to possible evidence of a crime.”

PSA production in the prostate gland is normal, and levels will increase as men age. Other contributing factors for an elevated PSA level involve benign causes such as infection, inflammation, or benign prostatic hyperplasia (BPH). Conversely, some factors, such as anti-inflammatory medications and obesity, may decrease PSA levels. In general, there is no standard range for PSA levels due to the variability of each individual. The test does not differentiate between advanced prostate cancer versus benign causes.

There are also non-aggressive types of prostate cancer that may not affect life expectancy and will only require active surveillance.  Prostate cancer is generally slow growing; some patients may only require observation, sometimes referred to as watchful waiting or active surveillance, instead of treatment. Patients in this group often visit their doctors every few months, receiving PSA tests, digital rectal exams (DRE), and symptom monitoring.

Maroni, program director of the multidisciplinary urologic cancer clinic at UCHealth, explains that because of these factors, “PSA levels are on a spectrum of risk based on individual considerations for each patient.” PSA levels also increase along a continuum as the disease progresses. Thus, levels on the lower end cannot exclude the possibility of prostate cancer. Because of the variability among PSA levels, patients without symptoms should discuss the benefits and limitations with their providers. This is important in reducing unnecessary testing and treatment.

Who gets a PSA test?

According to the guidelines outlined by the American Urological Association, shared decision-making for the early detection of prostate cancer is recommended for targeted groups of men with an increased risk of prostate cancer.

Over the age of 70, men in exceptional health should have a discussion with their doctor about whether PSA testing makes sense for them. 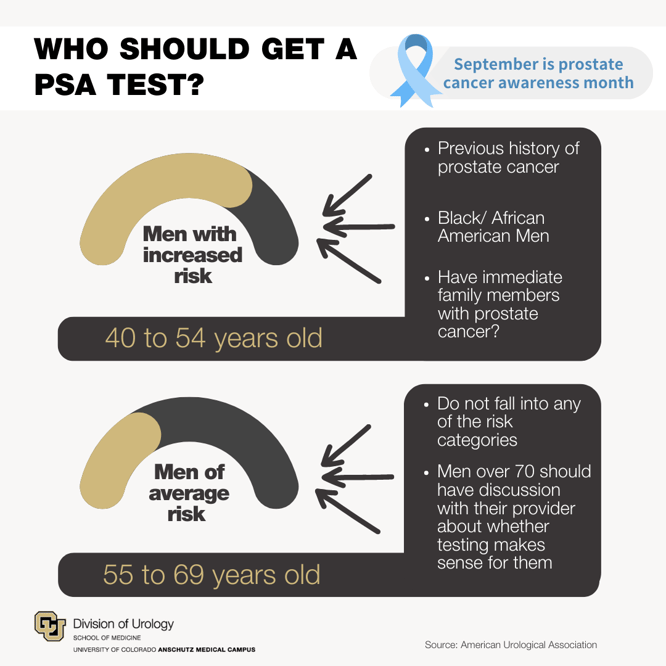 What does my PSA level mean?

Interpreting PSA levels can be confusing for patients and their loved ones, as it is not one size, fits all tool. In general, it is accepted that a PSA level above 4.0 ng/mL is considered to be on the high end. The National Comprehensive Cancer Network outlines the current PSA results:

An important reminder when looking at PSA guidelines is that these tests do not indicate cancer. Instead, values are attributed to individual risk factors and should be interpreted by a medical provider.

“The current evidence-based guidelines should be discussed between providers and patients so that the following steps can be decided together,” Maroni says. “The shared decision approach supports patients’ as they understand the risks and benefits of  PSA screening so they can make an informed decision with their providers.”