For most people finding out that they have prostate cancer multiple times in the span of just a few years seem like a cruel joke. But Jonathan Ormes is not most people. After being told for the third time that he had the disease he decided to take a chance on a University of Colorado Cancer Center study drug that, so far, is controlling his cancer. Ormes is not letting prostate cancer slow him down. In fact, he is using his experience to create poetry.

Ormes was diagnosed with prostate cancer in 2009 during a digital rectal exam (DRE), which has traditionally been one way to check the prostate for cancer.

“I had no symptoms at all,” says Ormes. “I know that it is not standard any more but it really should be! If it were not for the exam, I would have never known I had cancer.”

After he was diagnosed, he had his prostate removed and radiation treatment at a hospital near his home. The treatment plan seemed to do the trick and for three years Ormes’cancer disappeared.

Then, in 2012, a blood test determined that Ormes’Prostate-Specific Antigen (PSA) levels were increasing. Increased levels of PSA, a substance that is created in the prostate, is usuallya sign of prostate cancer.

Ormes, who had graduated from Stanford University and worked for NASA for 37 years, was well aware of the importance of being well-informed when choosing the best doctor for his case. After considering many different oncologists in the Metro area Ormes chose Dr. Thomas Flaig, MD, CU Cancer Center member and associate dean for clinical research at the University of Colorado School of Medicine, to take over his care.

“I feel very privileged to have gotten to know and care for Jonathan, “says Flaig.   “One of the uplifting parts of being a doctor is working with patients, gaining their trust, and working to find the best treatment for their individual situation.”

Flaig prescribed Ormes with Lupron, a hormone therapy that reduces the amount of testosterone created by the body. Lupron seemed to control his cancer for three years but in late 2017 Orme’s PSA levels suddenly began to rise again. This time at an alarming rate.

“Unfortunately, Jonathan’s cancer did progress rather quickly, as detected by a rising PSA blood test,” notes Flaig.   “At that time, we reviewed his options including standard of care and available clinical trial options for his cancer.  After significant discussion, he decided to enroll in a clinical trial.”

Ormes then started a combination treatment of Zytiga and a study drug as part of the clinical trial. Zytiga is an oral chemotherapy for metastatic castration-resistant prostate cancer.

For his part Ormes says “I feel so blessed to have found Dr. Flaig and his wonderful team at the Anschutz Cancer Center. They have taken such good care of me, carefully considered my quality of life, and paid attention to and respected all my concerns. Thanks to the drugs they have prescribed I am very lucky to be leading a pretty normal life. My [PSA tumor marker] levels are low, and my side effects are quite manageable. I am actually feeling better now than I have in a long while.”

“We had the opportunity to go to a writer’s workshop, so I figured why not?” says Ormes. “That experience was probably the neatest thing to happen to me during my time in the support group. I wrote a poem about learning I have two to three years to live when I was first diagnosed. It was a very humbling moment.” 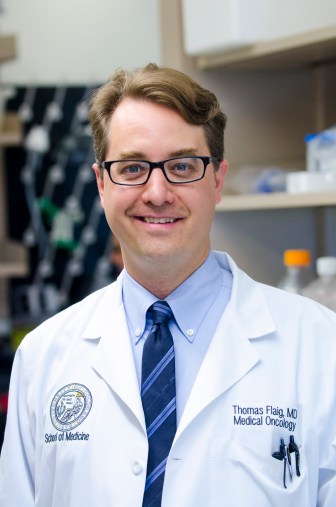