Thirty days of radiation treatments — five days a week, with Saturdays and Sundays off — are difficult for even the toughest of adults. But for a child, they’re even harder to bear. They involve fasting, waking up early, and lying in a dark room alone, without even your parents there for support.

But if during treatment you can take a trip to Agrabah to hang out with Aladdin, Jasmine, and the rest of the characters in Disney’s live-action version of “Aladdin,” it makes the sessions a lot easier to bear — not to mention it makes time go by a lot faster.

Thanks to a new innovation at the CU Cancer Center, patients like 5-year-old Piper Lardes are able to do just that — watch their favorite show or movie during their treatment to make the whole experience just a little easier. The technology, called Radflix, has a calming effect on parents as well.

“It made us feel secure knowing that Piper was doing something that she enjoyed or brought her joy during a time that’s really scary,” says Doug Lardes, Piper’s dad. “We could hear the music from the movies in the control room, which made us feel like we were in there, even though we were separated by a 2-foot wide lead door. We couldn’t see her, but we could hear her in there and share those same experiences.”

Adds Piper, “It kept me company.” She is undergoing treatment for a Ewing sarcoma tumor that is pressing against her spinal cord.

The attraction of distraction

Created in 2018 by Douglas Holt, MD, CU School of Medicine fellow, and Brian Miller, PhD, CU Cancer Center member, Radflix has its origins when Holt and Miller learned about using videos to distract young patients during other types of treatment.

“I thought, ‘This is genius. Why aren’t we doing this?’” Holt says. “So we started looking into the process of how to do it.” 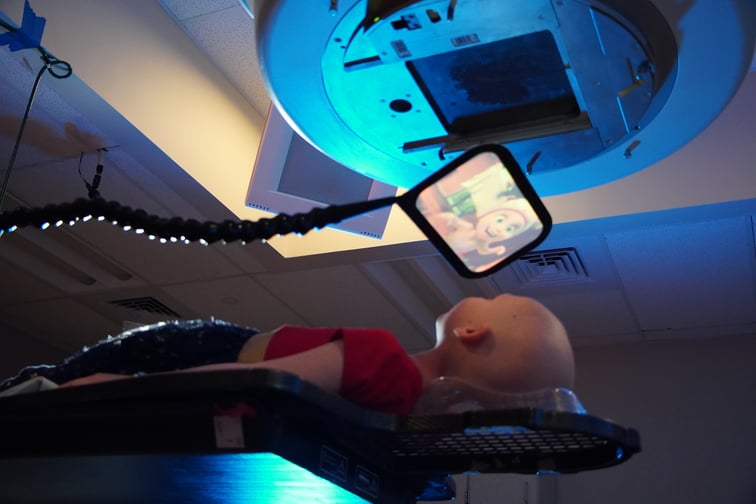 Piper Lardes watches "Inside Out" on Radflix during a radiation treatment.

After a lot of trial and error, they came up with a system that used a radiotransparent projector screen that allows radiation to pass through it. Miller designed a multi-lens custom long-throw projector system that shoots the image from a long distance to keep the image relatively small, allowing it to be mounted on the foot of the radiation table and travel with the patient as the table is moved. The patient chooses their favorite show or movie and watches it for the duration of the treatment, picking up where they left off during their next session.

“We can set up and load the system in about a minute,” Holt says. “It’s all wireless, it takes 20 seconds to take down, and there’s an Apple TV outside the room where the radiation therapists can manipulate everything. It’s been fantastic. When the treatment’s over, the kids often don’t want to get off the table. They want to stay and watch their show, which is usually not the case. Historically, they want to get out of there as quick as they can.”

In the case of Ellie Songer, who was just 8 when she started six weeks of radiation therapy for a rosette-forming glioneuronal tumor, Radflix provided not only a distraction, but a sense of comfort and familiarity during a process that can be scary and intimidating — especially for children. Spending time with the familiar characters on screen helped her feel less alone.

Ellie Songer talks to a technician before a radiation treatment.

“I thought it was nice,” says Ellie’s mom, Tiffany Songer. “It was something that she could do to distract her while she was in there so she didn’t just have to lie there and think too much. It makes it easier on the parents, too. It’s comforting for us to know they’re not in there just freaking out, that they’re more comfortable watching a show that they enjoy.”

Holt says the technology has yet another benefit — helping kids who are receiving treatment to stay still during treatment. It’s a task that typically is accomplished in younger kids using anesthesia.

“It’s amazing to see how with the video distraction, they just relax and quit moving,” he says. “If we can reduce the age at which you need anesthesia, that’s an end goal in and of itself. Thirty days of anesthesia is a lot for anyone to take.”

Piper’s mom, Bailey Lardes, agrees wholeheartedly. It was hard enough to see Piper restrained to the table during treatment, even if it was in a special mask decorated by radiation lab techs to look like Wonder Woman. (Piper wore a matching costume to several of her treatments.) Anesthesia would have added a whole new set of complications.

“That’s huge, and we were grateful for that every time,” Bailey says. “I think if we hadn’t had the Radflix, there would have been a much greater risk for having to go under.”

Though the Radflix team occasionally uses the technology on adults — those with claustrophobia or a fear of being isolated — it’s primarily targeted at patients between the ages of 3 and 18. Holt and Miller have applied for a patent and are working with the CU Innovations team to find a company interested in making Radflix a commercial product, but for now they have set up a nonprofit consortium to share the plans with other medical centers, who can then purchase their own hardware and set up a Radflix system for their young patients. So far, they have seen interest from Ohio State University, the University of Pittsburgh, the New York Proton Center, and St. Jude Children’s Research Center, among others.

“Seeing the impact it has on the patient experience, it’s something that should be out there for every kid,” Holt says. “It’s that big of a deal.”

For Piper, the combination of Radflix and the radiation techs who started to feel like family made her radiation treatments, in some ways, something to look forward to.

“She wanted to see the techs, she knew she was going to watch something she enjoyed, and she knew she was safe,” says Piper’s dad, Doug. “When you put those three things together, it gives a lot of empowerment for a kid. In a way, I’m almost dumbfounded that it’s not something that’s in every single location where kids and even adults are getting radiation. It’s amazing. In a time when you have no control over your body, having that much choice and control is huge. She gets to choose her movie, she gets to tell us how to walk to the radiation room — it’s choice through joy and positive things.”

Holt sees the technology as part of a growing movement that finds physicians as dedicated to caring for patients as they are to curing them.

“It’s not just treating the disease; it’s about providing the best patient experience, too,” Holt says. “Even though we treat their tumors, and hopefully most of them respond, they still take with them afterward the stress of going through this whole process. PTSD levels are high in pediatric patient survivors and even higher in their parents. It’s something that is not addressed as much as it should be.”

Something to look forward to

Even though Radflix has been around for more than two years at this point, Holt is still amazed at the power something as simple as another viewing of “Moana” has on a young cancer patient.

“It’s just a big boon. Even when we do consults next door at Children’s Hospital, sometimes part of our talk with the kids is, ‘Hey, when you get radiation, you get to watch your favorite movie.’ Often they’ll say, ‘Can we go right now?,’ which is just unheard of. There are some great studies out that go through the experiences of these pediatric patients and their families, and it’s not a good experience. They can dread going. It’s an adult hospital; it’s not kid-friendly; it’s nothing to look forward to; it’s gray and dreary. Now they have something to look forward to and get excited about. It’s made things a lot more fun for these kids.”