The cancer journey can be a solitary one, whether you’re a patient, a survivor, or a friend or family member of someone who died from the disease.

But once a year, more than 200 members of the Colorado cancer community come together to share their stories, commemorate their losses, celebrate their victories, and lift each other up — all in the beauty of Colorado’s high country.

“I call it adult summer camp,” says Amber Dunlap, team captain for the Wheels of Justice cycling team, which rides every summer to raise money for cancer research and support at Children’s Hospital Colorado. “You have all these people who’ve been through a very similar story to you, whether it’s 30 rounds of chemo, 180 days in the ICU — all of the terrible things that people have gone through, both survivors and those who have passed. It's all about community.”

Part of a larger whole

Founded 18 years ago by a group of attorneys (hence the name) who wanted to give back to the community, the Wheels of Justice team gathers every summer to take part in the Courage Classic, a fundraising bike ride for Children’s Hospital Colorado as a whole. This year’s ride takes place July 16­–17.

“One of the things that was very important to the early founders of Wheels of Justice was wellness, and how therapy for cancer is really a multidisciplinary, multifaceted approach,” says University of Colorado Cancer Center member Lia Gore, MD, director of the Center for Cancer and Blood Disorders. “You can’t just treat the disease; you have to treat the whole person to get the best outcomes. They were very excited to help support our wellness program, including funding for a psychologist, our child life workers, our social workers, and our art therapist. Most families who go through this experience say that contact with those people — the psychologist, the social worker, the child life worker — spelled the difference between them getting through this and really struggling.”

For Dunlap, who rides with the Wheels of Justice team in honor of her brother, Brandon Nuechterlein, a childhood cancer survivor who is now a senior instructor of pediatric hematology and oncology at the CU School of Medicine, the event is a highlight of the summer. The sense of community she feels there, coupled with the opportunity to raise a significant amount of money for childhood cancer research and treatment — the team has raised more than $5 million over the past 18 years — is something she plans for and looks forward to all year long.

“I don't think I've ever done anything more rewarding,” she says. “The first year I finished the Courage Classic, I just broke down. Physically and emotionally, it was the most challenging thing I'd ever done. When you ride your bike for six to eight hours, you have a lot of time to think. You get to the top of Vail Pass, and it all comes to a culmination. I remember thinking, ‘Yeah, this was hard, but cancer is really hard.’”

Each year, Wheels of Justice rides in memory of a cancer patient who died from the disease. This year’s honoree is Cooper Deming, who died in 2017 from a diffuse intrinsic pontine glioma (DIPG) brain tumor, a type of tumor that is highly aggressive and difficult to treat.

“The first symptoms came up the day before his 12th birthday. He had just finished sixth grade,” says Cooper’s mom, Amy Hudson, of Denver. “He was excited about a summer of baseball, riding his bike, going to the pool, and he developed what I thought was minor double vision. It slowly became apparent that it wasn't anything minor.” 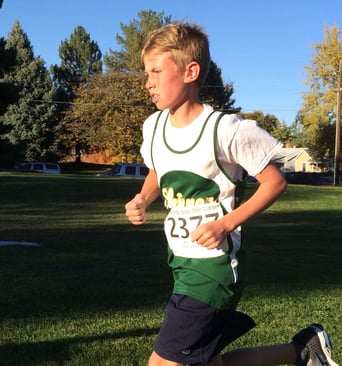 An MRI showed the tumor on his brainstem, and Cooper’s balance and vision grew worse. He received radiation therapy, but he died 11 months later from this always-fatal tumor. Hudson soon started her own Courage Classic cycling team, Climb for Coop, in her son’s honor; it is now under the umbrella of Wheels of Justice.

“Bike riding is the perfect thing to help you slowly adjust to a loss like this,” Hudson says. “You’re out there on the road by yourself for a lot of hours, and it gives you time to clear your head, to cry and tire yourself out. And finishing a tough ride like the Courage Classic is a great feeling.

“I ride because I want to see more research conducted for pediatric cancer, particularly DIPG and other brain tumors,” she adds. “I don’t want anyone else to go through this. Research is the only hope.”

One of Hudson’s favorite parts of the event is seeing young cancer survivors on their bicycles, thriving despite their experiences.

“I don’t think we acknowledge how hard it is to be a survivor,” she says. “There’s this narrative that society has settled on with cancer: ‘You’re a warrior. You beat it. You’re cured.’ But when you’re a kid, being cured from cancer doesn’t mean you’re done. Chemotherapy and radiation can cause lifelong effects. I love seeing kids rise above that and find their own path. Survivors have their own battle, for sure.”

To Gore, the real beauty of the Wheels of Justice team and its participation in the Courage Classic is that in gathering to share and celebrate their own cancer journey, the riders are helping to advance care for the next group of young patients to come along. It’s why nurses, pharmacists, physicians, and researchers from the Center for Cancer and Blood Disorders take part in the event every year.

“We would not have our wellness program without Wheels of Justice, and we would not be able to train our fellows in the same way that we do,” Gore says. “They are difference-makers literally every day for our patients and families. They’re just the most generous, energetic, motivated group of people, and we are so fortunate to have their support.”