Home News “You Are Cancer-Free” back to News

The cancer diagnosis came at a time when it seemed as though everything was happening – he was only 37 and soon to become president of the Denver City Council; his three children were ages 4, 6, and 9; he had just run the BOLDERBoulder 10K.

But it was while running the BOLDERBoulder, in fact, that Albus Brooks first noticed something was off.

“I was feeling pain and running so poorly,” he recalls, which is significant for a former University of Colorado football defensive back standout.

What followed was a journey through diagnosis and surgery, through a recurrence two years later in 2018, to an annual check-up this September when he heard the words, “You are cancer-free.”

“That’s the goal, isn’t it?” he says. “Those are the words you want to hear, and I know not everyone gets to. I know what a privilege it was for me to hear them.”

“I’m going to see my kids grow up”

Since graduating CU, Brooks sped from accomplishment to accomplishment. He served as director of the Issachar Center for Urban Leadership and then in 2010 worked on then-Denver Mayor John Hickenlooper’s successful campaign for Colorado governor. That experience piqued his interest in political leadership, and in 2011 Brooks ran for Denver City Council and became the youngest African-American ever elected to it.

Brooks and his wife, Debi, were busy raising children Makai, Kenya, and Kaya, and he still somehow found time to go snowboarding, biking, and running. He had big responsibilities, he had a body that he’d worked hard to train for strength, and he didn’t have time for what he might have perceived, before his diagnosis, as weakness. 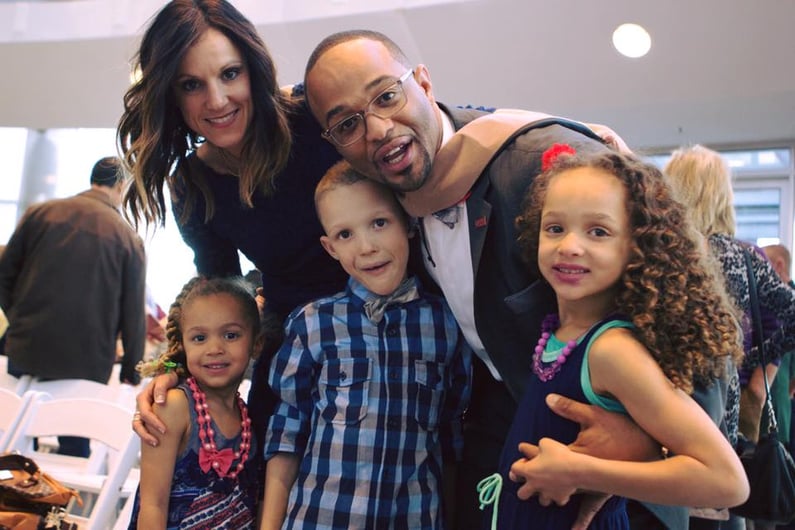 Debi and Albus Brooks and their children Kaya, Makai, and Kenya

But while running the Memorial Day weekend BOULDERBolder in 2016, he had pain and stiffness in the muscle connecting his spine to his pelvis. His wife suggested he visit a chiropractor, “and during this one stretch, the tumor popped out,” he remembers. “You could literally see it. So, obviously my chiropractor said go see a doctor ASAP.”

He was able to meet with his primary care physician that afternoon and received a CT scan and biopsy, the results of which revealed chondrosarcoma, an extremely rare cancer that originates in cartilage cells. He was then referred a multidisciplinary treatment team at the CU Cancer Center.

“Sarcomas are the cancers that no one knows about unless you have one or someone you love has one,” explains CU Cancer Center member Breelyn Wilky, MD, associate professor of medical oncology, and director of the Sarcoma Program. “There are about 100 to 150 types of sarcomas, but they represent only 1% of all adult cancers. We’re used to hearing breast cancer, lung cancer, but these are cancers of connective tissue, the materials that hold us together structurally, like bone, tendons, and cartilage.”

Brooks says he doesn’t have a family history of cancer, and in fact sarcomas are “genetic flukes without risk factors,” Wilky says. “The thing with Albus’ sarcoma was the unusual location. More commonly we’ll see them in an arm or leg, in a big joint, but his was on his spine. He could have had it for years and had no idea.”

The diagnosis, Brooks admits, threw him for a loop. “I was freaking, I couldn’t believe it, I’m thinking my life is over,” he says, remembering his then-oncologist, Victor Villalobos, MD, telling him “the people who survive have the mindset that this is not going to defeat them. I told myself over and over, ‘I’m going to see my kids grow up’.”

Pushing through an unexpected recurrence

On July 5, 2016, Evalina Burger-Van der Walt, MD, a professor of orthopedics, removed a 15-pound tumor from Brooks’ spine. She performed a second surgery July 18 to remove his compromised L4 vertebra and fuse his L3 and L5 vertebrae.

At 11 p.m. the night before Brooks’ second surgery, however, he learned that his father, Perry – his best friend and confidante, his coach, the person who taught him “you can out work anyone” ­– had unexpectedly died at age 71 of heart complications.

“I don’t have words for that devastation,” he says, “and I’m having to go into surgery the next morning.” That same day, his colleagues on the Denver City Council selected him as council president.

Grief exacerbated the pain of his recovery, but Brooks says his father always taught him to keep pushing forward, so that’s what he did. His follow-up schedule included CT scans and MRIs every three months, with the goal of graduating to follow-ups every six months then every year.

But in April 2018, a CT scan showed a small tumor recurrence and he was scheduled for surgery on May 1. He remembers he’d heard that surgeries for a recurrence can be a lot more physically demanding, but he felt almost nonchalant going into the procedure that resulted in a 10-inch scar down the center of his abdomen. The tumor was removed with negative margins and he returned home 30 hours after surgery. 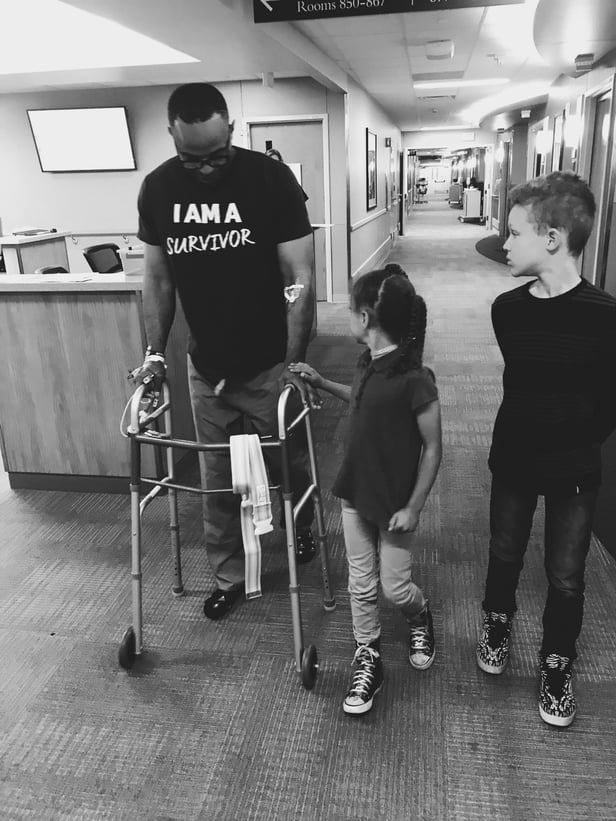 Unfortunately, 10 hours later he was back in the hospital with an ileus, a temporary disruption of normal muscle contractions in the intestines. He ended up with a tube from his nose to his stomach, unable to eat or drink for the next three days.

For someone who was on the path to the NFL before a knee injury halted that goal, who was serving his second term as a Denver City councilor, who was used to pushing his body and having it respond, the temporary weakness was humbling.

“(Because of cancer) I grew much more reflective, much more in pursuit of my calling,” Brooks says. “At first, I was thinking it was this albatross around my neck, but I see how it made me much more empathetic. I had to learn to slow down and live the moment I was in.”

Encouraging people to not ignore symptoms

Following his 2018 surgery, Brooks returned to a follow-up schedule of CT scans and MRIs every three months, then every six months, then every year. During his recent appointment with Wilky on Sept. 8, he exuberantly tweeted, “That feeling when you hear from your doc, ‘You are cancer-free’” and included a photo showing his cancer-free scan. 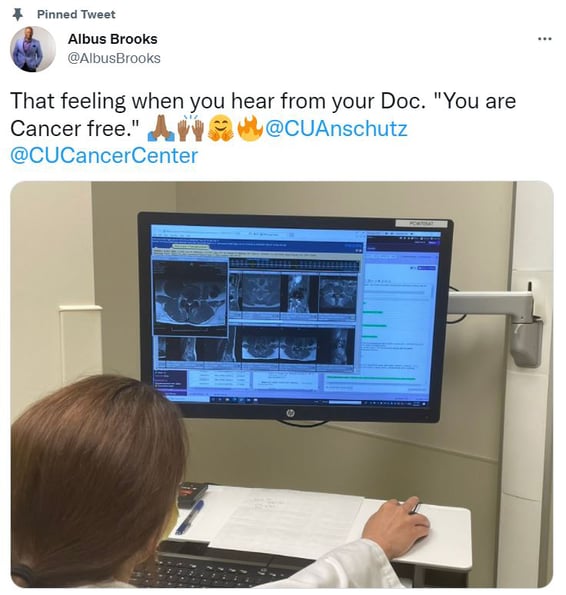 “Albus has been such a good example of what to do right,” Wilky says. “Especially because his sarcoma was in his back, back pain is notorious and people have it all the time so they’re likely to just ignore it. It’s so important that people don’t ignore their symptoms, they keep pushing and don’t ignore it if they feel a mass, because early detection and treatment can make such an important difference.

“What I tell patients, especially newly diagnosed patients, is if you Google sarcomas you’re going to get the worst of the worst, just these scary numbers and disease averages. But the only statistic that matters is your statistic.”

For Brooks, who now is vice president for strategy and business development with Milender White Construction Co., the cancer journey has helped him strive daily to be “the best version of myself and helping my kids be the best versions of themselves,” he says. “I’m more present as a husband and a father.”

He’s back to snowboarding, cycling, and running, and designed the tree of life tattoo that commemorates his father and encompasses the 10-inch scar on his abdomen. He also is committed to ensuring that everyone can access the care and resources he was able to, he says. 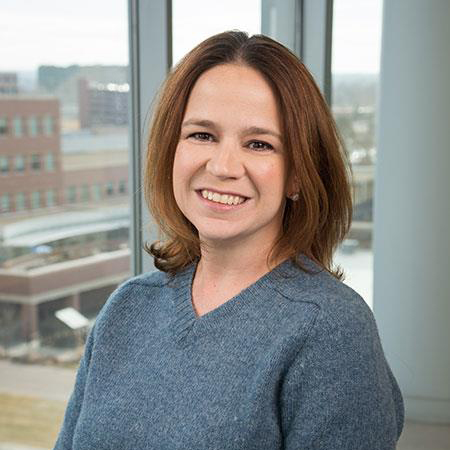