​Faculty of the University of Colorado School of Dental Medicine recently recognized outstanding members of the 2019 Class of the Advanced Standing International Student Program.​

Dr. Teerthesh Jain, Dr. Tao Jiang, Dr. Pawandeep Kaur, Dr. George Mirsal and Dr. Eunkwang Roh (pictured above) were inducted in the Pi Rho chapter of Omicron Kappa Upsilon (OKU), dentistry’s national honor society. Each year, the society inducts new alumni members. A number of new inductees, not to exceed 12 percent of the class, are chosen from the top 20 percent of the class according to grade point average. 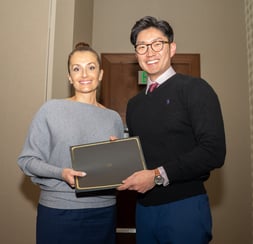 Dr. Emanouela Carlson, chair of the Division of Endodontics, presented Andrew Choi (DDS ’19) with the Student Achievement Award for Excellence in Endodontics from the American Association of Endodontists.

The Student Achievement Award is presented annually to a student who has demonstrated excellence in the endodontic care of the patients while at CU Dental. The recipient of this award is given a one-year complimentary membership to the Association, subscription to the Journal of Endodontics, discounted registration for attending the annual session and other membership privileges.

The International College of Dentists, established in 1928, is an international honorary dental organization with more than 12,000 members.  Its guiding motto is “Recognizing Service and the Opportunity to Serve.” This award recognizes a graduate for leadership and meritorious service dedicated to the continued progress of dentistry for the benefit of humankind.  Dr. Chandler received a $500 as part of the award. The award is presented with a $500 check. 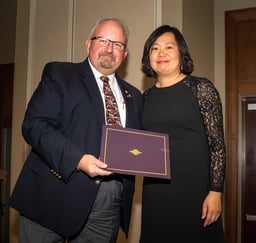 Dr. Pat Prendergast, Chair of the Colorado Section of the American College of Dentists, presented its annual award to Joyce Zhou Chen (DDS ’19).

The American College of Dentists was founded in 1920 to elevate the standards of dentistry, to encourage graduate study, and to grant fellowship to those who have done meritorious work. The ACD has long been regarded as the ‘conscience of dentistry.” It was the first organization to promote what we today call ‘continuing education.’ This award recognizes a student who has shown extraordinary commitment to learning, integrity and professionalism in the care of his or her patients. As part of the award, Dr. Chen received a $500 check. 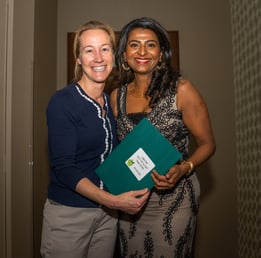 The Pierre Fauchard Academy was founded in 1935 to help the profession gain control from commercial interests and raising the standards of the dental profession. The Academy is named after Pierre Fauchard of France, who in the mid-1700s was recognized as the Father of Modern Dentistry for his efforts to raise dentistry to the level of a profession and focusing on professionalism and ethics. When it was founded, one of the primary objectives was to gain control over dentistry’s own literature, and that remains true today with the publication of Dental Abstracts.

PFA currently has 11,000 Fellows around the world, all of whom are leaders in various fields of dentistry.

The Fellows of the PFA have the mission to recognize and grow leaders in the dental profession, their communities and society by focusing on professionalism, service, integrity and ethics. 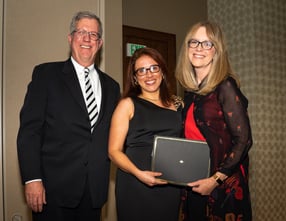 This award honors a graduating ISP student who shows great compassion, ethical and exemplary care to their patients during their clinical time at the University of Colorado School of Dental Medicine and includes a $500 check.

The award was established by former faculty at University of Colorado Dr George Gatseos Jr. and his wife, Janet Gatseos, RDH, both of whom are alumni of CU Dental. The couple established the award in memory of George’s grandfather, Gus G. Gatseos, and his father George G Gatseos Sr. Gatseos’ grandfather was a Greek immigrant who left his homeland with his three brothers at the age of 12, coming through Ellis Island. Gatseos’ father was born in Nebraska, served in World War II before moving to Denver to raise his family and becoming a civic leader.

The very first recipient of this award was Dr. Victoria Saniukovich in 2011. In 2017, Victoria lost her battle to cancer and we now honor her wonderful memory with this award. Drs. Wilson and Towne have committed to financially support this award for the next decade.