What You Need To Know
Though the January 7 White Coat Ceremony for the Class of 2024 has been postponed due to rising COVID-19 numbers, we want to still highlight and celebrate members of the class as they begin their clerkship assignments.

Even as a premed student at the University of Minnesota, Ava Swenson knew that to feel truly fulfilled in her medical career, she would need to find ways to indulge her loves of art and history along the way.

That’s why she double-majored in biology and medieval medical history, and it’s why Swenson — now a second-year medical student at the University of Colorado School of Medicine — has continued her longtime hobby of drawing throughout her undergraduate and medical school education. At one point Swenson sold her work on Etsy, and earlier this year she had one of her pieces published in The Human Touch, the annual publication that features poetry, prose, artwork, and photography from across the CU Anschutz Medical Campus. 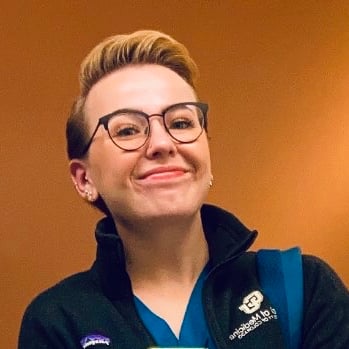 "I get the feeling that I'm doing what I'm supposed to be doing," Ava Swenson says of medical school.

“I think medicine is connected to art,” she says. “In historical texts, people talk about the art of medicine. The human form is so complex, and art is a really exceptional way to understand it, whether that means you're writing poetry about it to figure out how to understand emotions, or you're drawing it to better understand connections.”

Swenson has continued her medical history research at CU as well, writing her Mentored Scholarly Activity capstone paper on how religious leaders and community leaders can play a role in promoting novel vaccinations.

“I compared the role they played in giving the smallpox vaccine in premodern England to how the COVID-19 vaccine has been received by religious communities and how they're playing a role in encouraging their community members to get it,” she says.

Swenson’s journey into medicine is informed by her interest in science and anatomy, as well as a series of illnesses her father underwent when she was young. Her parents were divorced, so Swenson stepped up to help her dad coordinate his care and make medical decisions.

After graduating from the University of Minnesota, she worked as a scribe in a hospital emergency department, working with doctors to document their exams and their results. She eventually became a trainer, then lead scribe, a role that found her in charge of a team of 60 scribes between two emergency departments.

“That was nice, because I got to help them as they became premed or pre-PA, or whatever they wanted to do,” she says. “I like mentoring a lot.”

Intensive care for those most in need

Swenson will start her clerkship at UCHealth Memorial Hospital in Colorado Springs this month, training in a variety of specialties, but she already has a good idea of where she wants her career to go. She recently completed a preceptorship at Denver Health’s intensive outpatient clinic, designed for patients who have been admitted to the hospital more than three times in one year. She says she can see herself working in a similar setting after graduation — possibly back home in Minnesota.

“It's kind of like emergency medicine in terms of the intensity of the care, but they're very complex patients. It's like primary care on another level,” she says. “I’m a big proponent of integrating social health care into physical and mental health care, and it's really enjoyable to get a whole sense of these patients and what they need socially, in terms of housing and resources and mental health care, outside of managing their very complex comorbidities. We have a large homeless population; we have a large population of folks who need a lot of extra help. That’s very rewarding for me. I don't see myself becoming burned out if I were to work in a field like that.”

As she prepares to leave the Anschutz Medical Campus for her clerkship, Swenson looks back at her first 18 months of medical school with gratitude. As class co-president, she has spent countless hours communicating with her fellow students and bringing their concerns to the administration. It wasn’t always an easy task during the peak of the COVID-19 pandemic, but she says she’s appreciative — if a little surprised — at how tight her class has become.

“It isn't a competitive environment. I don't know if that's just our school, but I find that we're all very willing to help one another,” she says. “I guess I expected more competition between classmates, because we're all trying to get into certain residencies. I've heard horror stories of other medical schools where people don't share resources, and that's just not my experience at CU. Maybe it's the pandemic too, but my classmates are really supportive of one another.”

Swenson’s favorite thing about medical school? The clarity that she is right where she is meant to be.

“I get the feeling that I'm doing what I'm supposed to be doing. I really enjoy it,” she says. “I didn’t expect to feel that so clearly. It was out of the blue one day — I was leaving clinic, and I was so overwhelmed with happiness and the feeling that, ‘This is it. This is what I'm supposed to do with my life.’ Yes, it’s difficult, but at the end of the day, every time I go in to see my patients, it makes it entirely worth it.

“There was always a part of me that considered doing a PhD in history and teaching history instead, because I like that and I think I would be happy doing that,” she continues. “But now, having had that kind of realization, I don't think I could be as happy.”