Franco-Paredes, an associate professor of medicine at the CU School of Medicine, has been a leading voice for protecting the health and safety of those held in custody and those who work in jails, prisons, and detention centers.

“I feel like clinical medicine is incomplete,” Franco-Paredes said. “We need to be doing something more, beyond the clinical encounter in the hospital or in the clinic. We need to go to the community and try to address some of the larger issues.”

During the pandemic, that commitment to getting beyond the clinical encounter has included Franco-Paredes traveling coast-to-coast to inspect jails and prisons. He has been the court-appointed inspector of the Prince George’s County Jail in Maryland and he has inspected facilities in Oakland and for the Los Angeles County jail system.

He also has issued advocacy letters used in court hearings seeking to create safer conditions for those held in custody. Collaborating with the Southern Poverty Law Center, the University of Texas School of Law’s Civil Rights Clinic, and other groups, Franco-Paredes has produced declarations on behalf of detainees in Immigration and Customs Enforcement detention centers. He has been actively publishing in peer-reviewed journals, including The New England Journal of Medicine and the Lancet.

"The most important thing I learned is you can have soap, you can have disinfectants, you can wear masks, but if you do not reduce the population, you’re not achieving anything." - Carlos Franco-Paredes, MD, MPH

“I have found it a very rewarding experience, providing this feedback to the judges and seeing some of the changes,” Franco-Paredes said.

In an open letter that was widely publicized in March, Franco-Paredes wrote: “The prompt release on parole of detainees with medical conditions at risk of severe disease and death due to coronavirus infection may reduce the impact of this outbreak among detention facilities. This intervention may also effectively reduce the potential spillover of the outbreak from a detention center into the community.” 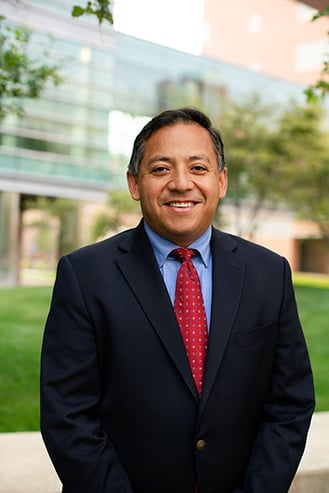 Franco-Paredes’ expertise and advocacy made a difference for many people, said Tom O’Meara, volunteer attorney for American Gateways, a group that provides a range of immigration legal services in Central Texas.

“The work of Dr. Franco-Paredes not only helped these individual detainees and workers, but also affected the policy decisions which resulted in large-scale efforts to protect those associated with U.S. Government Detention Facilities,” said Meara, who volunteers for American Gateways in Austin and San Antonio. “He donated his own time at a moment in time when there were many competing interests. Saving lives.”

O’Meara said he is personally aware of four people, two with respiratory issues, one with chronic high blood pressure and one with active cardiovascular disease, who were paroled into more favorable circumstances because of the work of Franco-Paredes.

“Those employees, contractors, and vendors could have been asymptomatic carriers of the novel coronavirus because they were doing jobs as essential workers in facilities that house prisoners, defendants in criminal complaints, and suspected illegal immigrants. Protecting those human lives is a primary goal, but the effect was to offer policy guidance that could set a standard for other communities to follow.”

Franco-Paredes said it is practically impossible for crowded jails and detention centers to provide the physical distancing necessary to control the spread of the novel coronavirus that causes COVID-19.

In a jail that he inspected, there were hundreds of people crammed into the cells, sometimes with triple bunk beds and inmates sleeping head to toe. When those held in custody were moved from one location to another in the jail, they were standing less than one foot away from one another in line.

“The only important step is reducing the population of these places,” he said. “Once you do that, you can start separating people, including the medically vulnerable, and protecting them.”

Throughout his career, Franco-Paredes has been dedicated to public health issues. He earned his MD from La Salle University School of Medicine in Mexico City, and in 1996 began his residency and internship at Emory University School of Medicine in Atlanta, serving as chief medical resident at Grady Memorial Hospital. He did a subsequent fellowship in infectious diseases and completed a Master of Public Health degree at Emory University.

In 2002, he moved back to Mexico, where he worked for the country’s Ministry of Health, providing critical review of national health plans on vaccination, infectious diseases, influenza pandemic preparedness, and other issues. He also helped develop the country’s preparedness plan for Severe Acute Respiratory Syndrome, coordinating Mexico’s plan with public health officials in the United States, Canada, and other countries.

Franco-Paredes returned to Emory in 2005, with a faculty appointment and consulting for the World Health Organization. He later worked as an infectious diseases clinician for a private hospital system in Albany, Ga. He joined the University of Colorado School of Medicine in 2017. In addition to clinical work and research, he is director of the Infectious Diseases Fellowship Program.

The range of experience gives perspective and informs how Franco-Paredes pursues his work. He said physicians must do more than make a clinical diagnosis.

“When we see patients in the hospital, we do these biological, biomedical interventions,” Franco-Paredes said. “They get better and then we send them back into the same conditions that made them sick without paying much attention.”

Offering rehabilitation services to a person with a drug addiction is a start, but that effort only goes so far. Case managers can help guide the person to resources to find a job, he said, but that still doesn’t address bigger issues.

“I just think it’s unfair that we don’t dig deeper into their lives and realize that we can do more,” Franco-Paredes said. “I think that’s where we fail because we don’t recognize those structural vulnerabilities, like discrimination, food insecurity, housing insecurity, job insecurity, all those different things.”

He recalled a patient who came to see him. “This lady said, ‘I don’t have any income, I haven’t eaten in three days,’ when she came to an appointment. That’s unfair, man. That’s not right. You can’t not address that issue, right? So we had to figure out a way to help her.”

Colleagues emphasize the commitment to compassionate care and justice when they describe working with Franco-Paredes.

“He has a genuine, good heart,” said Megan Robins, who coordinates care for patients in clinic for Franco-Paredes. “He’s thoughtful, compassionate, and empathetic. He never makes you feel bad about asking to help someone.”

Janine Young, MD, associate professor of pediatrics, medical director of the Denver Health Refugee Clinic and co-director of the Human Rights Clinic, said Franco-Paredes has been an important colleague in providing care for underserved and marginalized people.

“Not everyone chooses to do that,” Young said. “It is commendable and inspiring. He is not afraid to make waves when he needs to. He has been an incredible partner with this work.”

Franco-Paredes said his COVID-19 work with incarcerated and detained populations usually stems from litigation pursued by civil rights groups. He explained that protecting public health is a vital service and legal responsibility. Administrators who run jails, prisons, and detention centers are legally required to ensure well-being of the people held in them.

“These people cannot shield themselves from the pandemic and then they don’t have access to the right medical care in case they become ill,” he said, “and some of them are at risk of becoming highly severely ill.”

A recent study published in JAMA reported that the COVID-19 case rate for prisoners was 5.5 times higher than the U.S. population case rate. In his own inspections and studies, Franco-Paredes found that temperature checks do not always catch asymptomatic carriers, testing procedures are inconsistent and not comprehensive, and quarantining procedures are not possible due to overcrowding.

Adding more tests is not a sufficient answer. More tools may help, he said, but they don’t replace truly taking care of people.

“But most important, I think, is our humanity is our instrument,” Franco-Paredes said. “I think that’s where we need to keep going, man. I really believe that we can do better. I really do.”