An important step in addressing the growing crisis of suicide by firearm among active-duty military servicemembers involves asking not only why these deaths are happening, but how.

This week, a national summit hosted by the CU Anschutz Center for Combat Medicine and Battlefield (COMBAT) Research and the CU Anschutz Firearm Injury Prevention Initiative brought together military and civilian stakeholders from around the United States in person to the CU Anschutz Campus to share research, strategies, and messaging for addressing and preventing firearm suicide in the military.

“We need to figure out not just policy, but training and research,” said Vik Bebarta, MD, director of the CU Anschutz Center for COMBAT Research and a professor of emergency medicine in the CU School of Medicine. “We need to be looking at larger strategies across all the services and how we can unify the language that we’re using and bring solutions to the servicemembers, their families, and our civilian communities.”

Summit organizer and moderator Emmy Betz, MD, MPH, director of the Firearm Injury Prevention Initiative and a professor of emergency medicine in the CU School of Medicine, said talking about firearm safety "is a core part of suicide prevention and having a whole day to really tackle this issue is so important."

One of the summit’s focuses was research and messaging related to safe firearm storage. Craig J. Bryan, PhD, a professor of psychiatry and behavioral health at The Ohio State University, has researched decision making and suicide risk and found that active-duty military members are more likely to express discomfort with not being in control, can easily get upset, and stay upset for longer.

When these findings are aligned with data showing that active-duty military members are more likely to be gun owners than the average U.S. population, gun ownership may correlate with emotional reactivity and suicide risk. 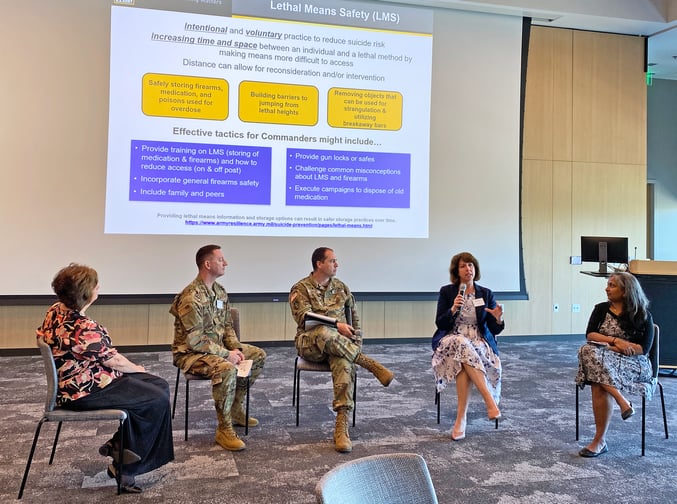 Both civilian and military representatives participated in the summit.

“A question we could be asking is whether there is education that can happen at the moment of first acquisition with a firearm,” Bryan said. “Since the beginning of the COVID-19 pandemic, there’s been an unprecedented surge of firearm sales, and (active-duty military members) may feel instinctively to maintain the protector role.”

Michael D. Anestis, PhD, an associate professor of urban-global public health at Rutgers University, said that the feeling of needing to protect home and family may be an obstacle to safe firearm storage “and our research shows that easy access to firearms increases suicide risk. And service members who recently had suicidal thoughts are more likely to store their firearms unsafely.”

Anestis emphasized that policy, research, and education relating to safe firearm storage must acknowledge an individual’s motivation to protect home and family and develop strategies to encourage safer storage.

Adam Walsh, PhD, a senior scientist at the Center for the Study of Traumatic Stress, Suicide Prevention Program in the Uniformed Services University, emphasized the need to understand what safety means at an individual level. “Safety can mean many things,” he said. “For some, it means easy access to a firearm that’s ready to go when there’s a perception of threat.”

Walsh added that initiatives to promote safer firearm storage may be challenged by beliefs that freedom and gun ownership exist hand-in-hand, as well by ideas that suicide is not preventable or that people are able to recognize when someone is at risk for suicide.

"There’s this belief that, ‘I know when somebody’s at risk for suicide’ and this idea that people at risk look mentally ill and are crazy,” Walsh said. “It’s difficult to think of yourself in that way, that you may not recognize when someone is at risk.”

Betz highlighted research into out-of-home firearm storage, which may be a factor in mitigating suicide risk. In interviews with 100 storage locations, she and her co-researchers found a common need for strategies to address legal liabilities relating to firearm storage as well as a need to increase storage accessibility. In the context of active-duty military servicemembers, she said it will be important to learn more about storage options on military installations, as well as the options for people living on base versus off base.

Multiple ongoing research and education initiatives are seeking to address the crisis of suicide death by firearm among active-duty military members on different fronts. One such initiative is the “go SLO” time-based prevention initiative in the Department of the Air Force, in which airmen are encouraged to use safes, locks, or store firearms outside the home.

The U.S. Department of Defense is supporting several research projects for which Betz is principal investigator, including “PROtECT: Promoting Responsible Ownership and Elevating Community Togetherness,” a qualitative methods study that adapts pre-existing lethal means safety counseling intervention for delivery and evaluation at Buckley Space Force Base in Aurora, Colorado.

“It’s so important that we’re bringing people from all branches of the military and from the full spectrum of academic research to address this issue,” said Major General Michael Keating, deputy commanding general of III Corps, Division West headquarters. “It’s something that goes beyond any one branch, because it’s about people. It’s about saving lives.”