Dottie Stearns’ road to medical school curved across San Salvador Island in the Bahamas, where she learned through studying Cyclura rileyi iguanas that it’s possible to survive a mass extinction event by burrowing.

Her road spanned the Sevietta National Wildlife Refuge in New Mexico, where she learned about the effects of reduced rainfall on root biomass production of bouteloua grasses.

Winding through the backcountry during a University of Colorado Wilderness and Emergency Medicine intensive training course, she learned how to recognize hypothermia and what to do about it in austere environments.

Since she was young enough to remember, Stearns has loved learning and drawing lessons from each opportunity she pursued. Whether it was gleaning the finer points of team synchronization as a cheerleader in high school, understanding what makes hiking boots durable while working at REI, or practicing mental stillness through meditation near the Dalai Lama’s home in Dharamsala, India, she has gathered knowledge from each step.

Despite, or perhaps because of, its challenges, Stearns found the right fit in medicine. It offers her opportunities to learn every day, to contribute to growing bodies of knowledge, to be an advocate for those who may not be able to advocate for themselves, and to promote issues and ideas that are important to her.

As she graduates from the CU School of Medicine this month and begins a seven-year general surgery residency at The Ohio State University, she is keeping an open mind to be ready for every opportunity that comes her way while looking forward to the discipline and focus of surgery. 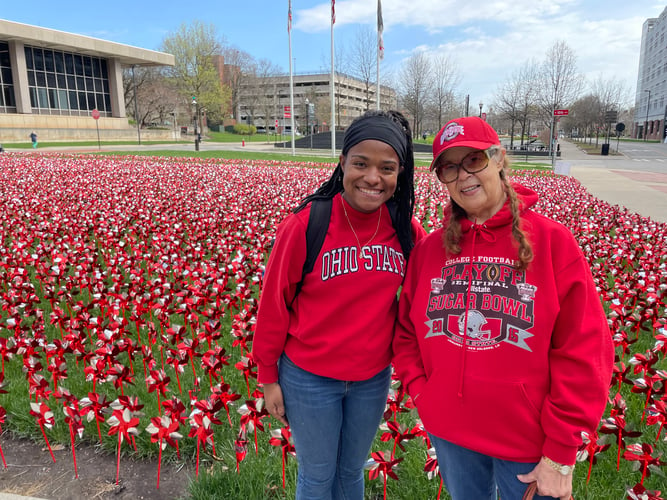 “I’m excited for the next chapter,” Stearns says. “In medicine I feel like I’ve found my community, and I feel like I’ve begun to see where I can play a role in advocating for underrepresented communities and helping people find a voice who may not have had one before.”

Growing up in the suburbs outside Atlanta, Georgia, Stearns laughingly admits that she was the nerdy kid who was into robotics.

“My mom enrolled my sister and me in science camps and whatever opportunities came our way,” Stearns says. “She was very proactive about it and wanted to give us every opportunity.”

In fact, Stearns’ mother was the first in her family to attend college and had dreamed of attending medical school before being roadblocked by its prohibitive expense. Stearns grew up with the idea of medical school always in the back of her mind, but there were always so many things to be interested in.

As an undergraduate at Emory University, her favorite professor was a paleontologist who studies, among other things, mass extinction events and animal scat. During her first semester she took his combined neuroscience behavioral biology and environmental science class and thought that was the path she’d pursue because “it incorporates more of a global, macro scale view of the world and I’m a very big-picture person, despite the fact that I’m going into surgery,” she explains.

She studied iguanas in the Bahamas with this professor, and much as iguana populations have evolved, Stearns noticed how her own interests were gradually evolving, too – from researching root biomass of native grasses in New Mexico to shadowing Tibetan physicians in Dharamsala.

She pursued her Bachelor of Science and Master of Public Health degrees through a dual program that allowed her to concentrate on environmental health for her graduate studies. As an Oak Ridge Institute for Science Education (ORISE) fellow in the Air Pollution and Respiratory Health Branch of the Centers for Disease Control and Prevention, she expanded her understanding of how the macro must balance the micro and how “the things we do as individuals are important, but we still have to advocate for policy change at more society-wide levels,” she says.

It was while pursuing research during her graduate studies and ORISE fellowship that Stearns began circling back to the idea of attending medical school. She had researched how traditionally underrepresented communities are disproportionately impacted by air pollution, and began to see how, as a physician, she could support and advocate for these communities.

As a Black woman, she felt strongly that she could be a role model for members of underrepresented communities pursuing medical education. She has served as the Medical Student Council executive president, which allowed her not only to connect with administration, faculty, and staff, but to participate in various panels and discussions.

“I think it’s helpful for people to see me be places, for other students who look like me to see themselves reflected in these positions,” Stearns says. “It’s not always the easiest responsibility, necessarily, but I think that representation is important so I’m willing to shoulder it.”

As she entered clinical work during the early days of the COVID-19 pandemic, she welcomed the responsibilities of practicing medicine. While she enjoyed each of her rotations through the various medical specialties, even picturing possible careers in each of them, she gravitated most toward surgery.

“I think one of the reasons why I like surgery is because it requires a technical aptitude that reminds me of drought exposure research I did, of work in the botany lab, that was more hands-on and technical,” she explains. “At the same time, you also have the intellectual pursuit of medicine that I love.”

During a pediatric surgical rotation at Washington University in St. Louis, Missouri, she gained experience in what she believes will become her career path.

“I love pediatrics because I love kids, and I love interacting with pediatric patients,” Stearns says. “I think because they’re so young in their health journey there are opportunities for intervention with preventative medicine. They’re also a vulnerable population in some ways because they can’t advocate for themselves, so there can be opportunities to be involved with advocacy as well.”

Leaving with the skills to do good

Stearns emphasizes that as she begins her residency, she hesitates to state the exact career path she might pursue because she wants to remain open to all the possibilities she will encounter. However, in general terms, looking 20 or 30 years down the road, “I would like to be chair of a department,” she says. “There are so few Black pediatric surgeons that I would like to be among the few, and to be in a position where I can effect change and work with diverse, unique learners.”

Until she heads to Ohio this summer, she is taking opportunities to hike and ski and spend time with friends. She also has reflected on the previous four years and the unexpected turns that her road has taken. Dottie Stearns has always loved the outdoors and many aspects of her education have happened outdoors.

“This is very much one of the hardest things I’ve ever done,” she says. “It’s challenged me intellectually, emotionally, psychologically, but it’s been life changing. I’ve connected with like-minded individuals and seen that no matter where the road takes me, I’m leaving this experience with the skills to do some good.”