Though the January 7 White Coat Ceremony for the Class of 2024 has been postponed due to rising COVID-19 numbers, we want to still highlight and celebrate members of the class as they begin their clerkship assignments.

Rebecca Henkind grew up seeing the example of her grandmother’s volunteer work with people experiencing homelessness – at the Flemington (New Jersey) Area Food Pantry and with Flemington Presbyterian Church’s shelter.

She saw that it was a labor of love for the woman she called Oma and when she was old enough, she learned why: As a teenager in Amsterdam during World War II, Elisabeth F. Kurz temporarily experienced homelessness after her father died and her Jewish stepmother was sent to and killed in a concentration camp. In the middle of winter, in the middle of war, Elisabeth was on the streets until she was able to find a home with her aunt and cousins.

Henkind grew up with this profound legacy, and it played a significant role in guiding her to working with people experiencing homelessness and, eventually, to medical school. As a member of the University of Colorado School of Medicine class of 2024, she draws not only from her own experiences but from her grandmother’s in pursuing medical practice guided by humanity and helping hands.

“Whatever path (in medicine) I choose, I know I’ll always want to make sure it’s informed by social justice,” she explains. “It’s easy for people to fall through the cracks or even just to be invisible, and working together within our communities there’s a lot we can do to help.”

Medicine seemed like the obvious path for Henkind, which maybe is why it wasn’t the one she initially chose. Her father is a physician and her mother is a nurse, both grandfathers were ophthalmologists, and an aunt is a pediatrician, so she pursued paths other than medicine as a means of branching out. As an undergraduate at Emory University, she studied economics, math and Chinese, including two summers at Nanjing University and Beijing Normal University in China. 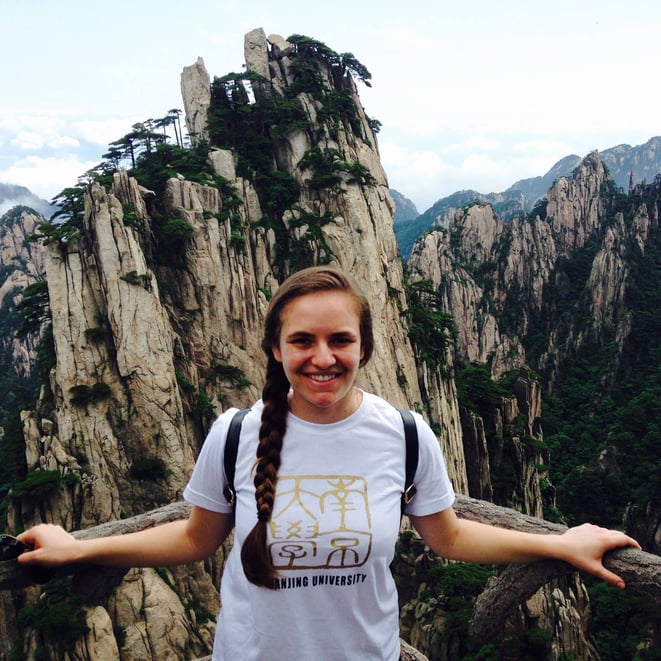 Rebecca Henkind during her undergraduate studies in China

After finishing her degree in an intense three and a half years, and free to consider the future during what otherwise would have been her last semester, she accepted a job as a ski instructor at Vail Ski Resort.

“I had this time where I should have been in school if I hadn’t already graduated, so I wanted to just go do something I really enjoy and see what I was truly interested in and drawn to,” she says. “I hadn’t really done that in college because college was a set track and the goal was graduating, so I was scouring the internet and trying to envision my life in 10 years. I just kept coming back to medicine.”

She decided to start with an intensive, three-week EMT training course at SOLO Southeast in North Carolina, and returned to Vail working as a full-time medical assistant at Vail Summit Orthopedics and part-time on the county ambulance with Eagle County Paramedic Services.

“I really enjoyed being an EMT and being a medical assistant, being part of a care team,” she says. “EMTs have set protocols and a set of skills that are in their scope of practice, but there wasn’t always a lot of opportunity for clinical decision making. Physicians do have the ability to make calls, and I realized I wanted to be able to provide a higher level of care.”

Henkind decided she wanted to become a doctor, and completed a post-baccalaureate year at Bryn Mawr College to fill in the gaps in her science education. After a year of physics, biology, and chemistry, she returned to Colorado and began applying to medical schools. She accepted a job as a medical assistant in the Colorado Coalition for the Homeless (CCH) Stout Street Clinic and also worked in the Health Outreach Program medical van outside Denver Rescue Mission every Monday night.

"It was such a phenomenal way to gain exposure and experience,” she says. “I think that’s when I fell in love with the work and saw the impact it can have. So many people who came in were experiencing homelessness, and I learned how that means you have fallen through almost every level of support that society has to offer. So many things have combined to get an individual to that place, and I began to see how even little things can make a big difference.”

While working with CCO, Henkind met recent University of Colorado College of Nursing graduate Kiera Connelly, a fellow EMT who became a good friend. As they began their respective medical studies, they also began brainstorming ways to interweave what they were learning in class with their passion for social justice and working with people experiencing homelessness.

Discussions with faculty advisors, other students, and school administrators inspired them to form CU Street Medicine, a student interest group that connects medical, nursing, and other interested students on the CU Anschutz Medical Campus with community partners who offer medical and non-clinical services to people experiencing homelessness or housing insecurity.

“It’s been really encouraging to see how welcoming people have been to the idea of it,” Henkind says. “We’ve had so many students reach out to us wanting to get involved and we have incredible faculty mentors who have spent years building relationships and partnerships, and who just genuinely believe in the power of intervention in homelessness.”

Now completing her second year of medical school, Henkind says she still is considering which specific path of medicine she’d like to pursue. Working with mentor Kathryn Boyd-Trull, MD, an assistant professor of family medicine, on CU Street Medicine has given her a broad view of general practice, while working with research advisor Catherine Garrison Velopulos, MD, an associate professor of GI, trauma, and endocrine surgery, has expanded her understanding of general surgery. Working with Velopulous, she completed and recently presented research analyzing Centers for Disease Control and Prevention data relating to violent death among people experiencing homelessness.

“I’m still looking at pursuing general medicine or surgery,” she says. “Some weeks I think I have it all figured out and then the next week I don’t. I just know that whatever I do will integrate social justice into my practice.” She also is completing a clerkship through the University Longitudinal Integrated Clerkship program.

In rare moments of down time, when not considering all the possible paths for her future, she skis and hikes, spends time with her boyfriend, and maintains a knitting-focused Instagram account with her mom and sister. She seeks out opportunities to connect with fellow students, especially since her middle-of-a-pandemic entry into medical school was so unconventional.

“In a lot of ways, I think I’ve been lucky because I’m a non-traditional student and I’ve been able to have different experiences that have helped give me direction in medical school,” she says. “I feel like the experiences I’m having now and the things I’m learning are guiding me in the direction I want to be going.”