Along with art and music, science classes are often among the first to go when a school is faced with budget cuts.

That’s why Aimee Bernard, PhD, an assistant professor in the Department of Immunology and Microbiology at the CU School of Medicine, in 2018 launched Think Like a Scientist (TLaS), an after-school program that teaches science skills to elementary school students from underprivileged and underrepresented populations. 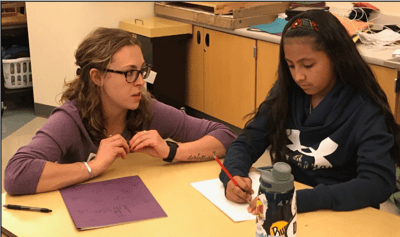 Most of the TLaS volunteers are graduate
students in the School of Medicine looking
to add some teaching experience to their
studies and to give back to their community.

“In order to make informed decisions about your health or your life or things you would do on a daily basis, being able to think critically and understand science and understand the scientific process — that enhances all aspects of your life,” Bernard says. “I would also like to see these kids go on to careers in science, because science opens up doors that are closed if you don’t pursue or understand science.”

The majority of the TLaS sessions have taken place at Elkhart Elementary in Aurora, Colorado. Bernard selected the school because of its proximity to campus, as well as its diverse student population and economic status. More than 90% of Elkhart students are eligible for free and reduced lunch, and the school had no budget for after-school programs. Organizers know there are many similar schools in the state that would benefit from the TLaS program.

“After we got into Elkhart and I started learning more about the way schools are funded in Colorado and exactly how many communities and how many schools are struggling to provide STEM education of any kind, it became very clear there was a huge need not just in one school, but throughout the whole of Colorado,” says Zoe O’Donoghue, PhD, who started as a volunteer in 2018 when she was a graduate student and now serves as program manager for TLaS.

Each TLaS session lasts eight weeks and enrolls around 20 students. The program is staffed by volunteers. Most of them are graduate students in the School of Medicine looking to add some teaching experience to their studies and to give back to their community, but the program also draws additional volunteers from across the Anschutz Medical Campus, including faculty members and post-docs.

“It was a really wonderful escape from daily lab work, going to a classroom with these students who were just so excited to learn anything about science. That was really infectious,” O’Donoghue says. “For me, it was something that was meaningful both in terms of the larger picture of getting representation in STEM at a really young age and in terms of feeling like I had some positive impact on my community.”

The COVID-19 pandemic has forced the program to go virtual, holding sessions online and distributing science kits in advance so students can follow along from home. Among the experiments they take part in are lemon volcanoes, which demonstrate the chemical reaction between lemon juice and baking soda; jelly-bean tasting, which shows students how the senses of taste and smell work together; and paper hovercrafts, which investigate the science that explains how airplanes fly.

The move to online sessions has been an adjustment, the organizers say, but it’s had a silver lining as well.

“It’s actually been easier to expand our reach to different schools,” O’Donoghue says. “The downside is you don’t actually get to be hands-on with the kids, which I think facilitates some aspects of the lessons better, but now we’re able to reach far more students. As a result of the pandemic, I actually see a world in which we go back to doing in-person stuff, but with some remote schools in more rural parts of Colorado, maybe we still can offer virtual programming. 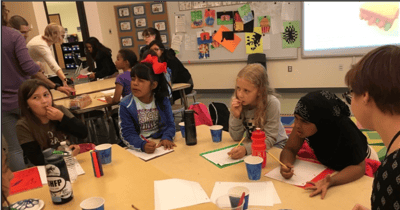 “When they’re young, students are much
more open to learning about science and
they’re much more inquisitive.”

That’s a great outcome, Bernard says, as it means more young people will be exposed to science at an age where that exposure has the potential to influence their future careers and their self-perception that they can become a scientist.

“When they’re young, students are much more open to learning about science and they’re much more inquisitive,” she says. “The children (aka ‘young scientists’) that participate in this program ask amazing questions; they’re super-engaged and they’re very curious. We’re trying to let them understand that anyone can be a scientist.”

And in good news for a profession in need of diversity, the program’s data shows that children who go through a TLaS session are much more likely to think they have the potential to be a scientist when they grow up.

“Throughout history, STEM has been pretty disproportionately white and male,” O’Donoghue says. “In order to increase pipelines where other demographics of people see themselves being in those careers, you have to start with kids. By the time these students are getting to middle school, they think, ‘I’m not good at math, I’m not good at science, I’m not smart enough to do that.’ if you don’t introduce them to this concept that it’s a very real and attainable career if they’re interested in it from an early age, you’ve already lost huge populations of students."